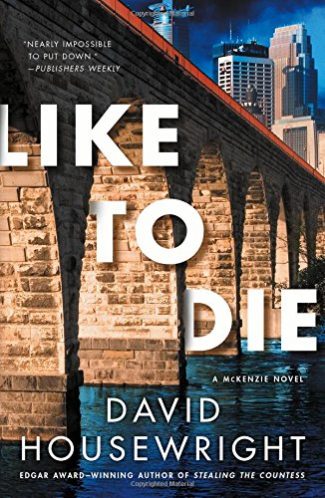 Like to Die by David Housewright is the 15th book in the Twin Cities P.I. Mac McKenzie series, where a seemingly simple investigation—done as a favor for a friend—takes McKenzie down a dark and twisted path.

What starts with a good-natured poker game between old buddies quickly morphs into the usual quagmire of criminality and dangerous women in Like to Die, the fifteenth neo-noir starring Rushmore McKenzie, a St. Paul detective who took early retirement to claim a multimillion-dollar bounty. But once a cop, always a cop. McKenzie may be a millionaire now, but he’s too good of a guy to look the other way when there’s a damsel in distress and danger afoot. And he’d be lying if the “roving troubleshooter” said he didn’t enjoy the excitement.

This time around, his focus is on Erin Peterson, the ladylove of his good friend Ian. Erin owns a successful company—Salsa Girl Salsa—and is facing some increasingly nasty vandalism at her production warehouse.

Just why would such a beautiful, hard-working businesswoman in the food industry be targeted? McKenzie doesn’t think salsa is worth destroying someone’s life over. And the more he digs into the private Ms. Peterson’s life, the more he realizes he’s never really known her.

Erin said she needed to mingle. I asked her if she wanted me to mingle with her. She said that would conflict with the brand. She was smiling when she said it, and in that moment I understood her more clearly than ever before. Erin used her sexuality like a Swiss Army knife. She had a tool that could be made to fit any task, to influence any individual, from the naïve sex kitten for Bignell to the caring older woman for Randy to the just-out-of-reach goddess for Ian Gotz to—how did she present herself to Sax, I wondered. A femme fatale, a full-blown “fatal woman”? She was the affectionate older sister for Alice, the rowdy drinking buddy for Maria, the sensual possibility for Marshall Lantry.

How is she playing you? My inner voice asked.

Of course, this could just be dirty business dealings. Someone trying to run Salsa Girl out of business to clear a path. But as things escalate in a big way, McKenzie’s gut is telling him there’s more to this than mere vandalism. Something Erin’s been hiding all these years…

There’s no shortage of shady characters, of course—this is a McKenzie novel. There’s the cutthroat patriarch of the company responsible for Salsa Girl Salsa’s distribution. His thwarted daughter and bumbling wastrel of a grandson—who also happens to be Erin’s business partner. Mysterious men in rental cars, following Erin and knocking McKenzie over the head.

I might have believed him, yet Billy answered so quickly that I was sure he was lying. He didn’t say he anticipated my question and ran Coyle after learning his name and address, for example. That told me Billy knew exactly who Coyle was. There were only three reasons why he wouldn’t say so.

Coyle was the target of an investigation.

Coyle was an asset, a CI perhaps.

Coyle was a cop.

Why would a cop whack me on the head? I asked myself.

Why wouldn’t he? my inner voice answered.

There’s so much fun to be had in a David Housewright novel—especially when it stars McKenzie. The initial scene set is always so innocent and everyday; here, it’s a St. Paul salsa factory. Completely innocuous. But over the course of two hundred pages, Housewright veers into encounters with drug lords, mobsters, and life-or-death scenarios. And it all feels organic and natural. You never doubt how serious the stakes are. Few think “Minnesota” when they hear the phrase “neo-noir,” yet by the last chapter with McKenzie, you’re a believer.

Like to Die features several familiar faces: burly criminal (and jazz aficionado) Herzog, several of McKenzie’s hockey pals/childhood friends/ex-coworkers, the slimy Marshall Lantry, and longtime live-in girlfriend and bar owner Nina. It’s always satisfying when Nina gets to pop in around the twists and turns to exchange some Nick and Nora-style banter with our hero. Their dynamic is refreshing for a neo-noir: both are middleaged, both are successful and down-to-earth. Even while McKenzie is running around with femmes fatales, Nina always trusts him because McKenzie is a fundamentally good, faithful guy—another nice surprise in a genre abounding with misogynistic P.I.s who fall into bed with a different woman in every installment, who are usually dour and tortured by some past tragedy. Optimistic, laidback, wealthy McKenzie is a fun change of pace.

That doesn’t mean he isn’t also capable as hell and incredibly well-connected, both in the criminal world and the realm of law enforcement. Even when he falls into a scrape, we have faith he’ll work his way out of it. It’s that capability combined with his no-nonsense inner monologue, straightforward charm, and respectful treatment of women that makes him such an enjoyable hero. Fifteen mysteries in, and I’m still not tired of him.

Like to Die is satisfyingly twisty, meaty, and action-packed. Housewright takes just enough time to set his scenes—amps up the tension to just the right level—before bringing down the hammer. And, by the final page, all of the threads have been unknotted and tied into a gratifying bow.