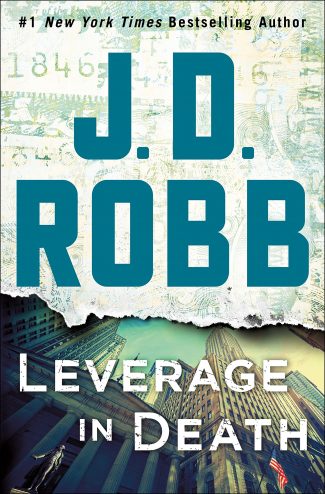 Leverage in Death by J. D. Robb is the 47th book in the In Death series, where Lieutenant Eve Dallas puzzles over a bizarre suicide bombing in a Wall St. office building.

As I sat down to review Leverage in Death, I checked to see what volume number it was and, to my surprise, found it was book 47! That’s an impressive achievement for any series, but it does bring up the question of whether the later stories can still bring the excitement of the earlier books.

The answer is a resounding yes—although, that depends on what you’re looking for in the In Death books.

If you’re a longtime reader like myself, half of the appeal is spending time with Eve Dallas, Roarke, and their found family in their world of a post-Urban Wars New York City as they make it a little bit safer. The other half of the appeal, however, works for new readers as well as returning ones: the In Death books are prime police procedurals that can be read separately on a case-by-case basis rather than part of a series.

The premise of Leverage in Death is intriguing (and possibly inspired by a real-life case): an executive is forced to wear a suicide vest to a meeting to finalize a merger with another company. He has a choice: blow himself and his friends/coworkers to pieces or allow his wife and daughter to be slaughtered.

He chooses the former, and that brings NYPSD (New York Police and Security Department) Lieutenant Eve Dallas onto the case. Dallas sorts out quickly that the bomber was a victim himself, but the motive is murky: Did someone have a personal vendetta against the owners of the companies? Is it political terrorism? Did the criminals want to prevent the merger? Or is it something more chilling?

Since it involves the business world, Eve quickly enlists the help of her husband, business magnate Roarke, to explain the financial fallout of the bombing. As in many of the stories in the series, Leverage in Death features a relentlessly ticking clock, adding urgency to the proceedings as it becomes clear that the pair of murderers will do this again unless they’re stopped.

What drives the emotion of the story, however, is the emphasis on the emotional fallout of the murders, which is a hallmark of this series. The dead or terrorized are not faceless victims but three-dimensional people who walk onto the page and make an impression, as in these couple of sentences when Dallas is interviewing a survivor of the bombing.

“He wasn’t acting right, he wasn’t, but he came out just before nine and he stopped, and he looked right at me. He told me I did good work, and how I was an asset to him, to the company. It felt good, you know? He always made sure to tell us when we did a good job.”

The passage not only humanizes the person speaking but the man who died at the beginning of the book. The tormented executive’s wife and daughter are particularly vivid in the first few chapters of the story, their pain and emotional devastation laid out against their determination to help each other cope. The story’s empathy is clearly settled on the victims rather than understanding the killers, save to know enough to find them. (Note: many of the characters introduced in the stories tend to show up again, adding to the ever-expanding cast and deepening the worldbuilding.)

The personal story against this backdrop concerns the long-running subplot of the movie within a book, The Icove Agenda, written by Dallas’s reporter friend, Nadine Furst. Previous In Death stories dealt with the publication of the book about one of Dallas’s cases that became a movie, then about the making of the movie (which, naturally, featured a murder), and now the movie is up for an Oscar, with Nadine nominated in the Best Adapted Screenplay category. This leads not only to Dallas’s characteristic refusal to attend the Oscars—so not her thing—but to Dallas’s realization that her partner, the intrepid Peabody, would be thrilled to attend and that Dallas needs to make that happen.

“She’ll probably win, just my luck.” Caught up, she brooded into her wine. “So anyway, Feeney and I hashed it out, and we’ll cut Peabody and McNab loose so they can go. They eat this stupid stuff with a spoon, and one of us should be there with Nadine, however it goes, even though she’s taking the rocker.”

Aside: one of my favorite touches in the recent books is that the rocker Nadine is dating calls her “Lois” after Lois Lane.

Dallas’s realization of her partner’s joy in the nomination is yet another step in showing how Dallas has evolved throughout the books, from an all-business leadership style to one that’s more flexible and human, though no less effective. Though, as Dallas complains, “Life was easier when all I had to do was think about murder.”

It’s these little bits of growth in each book that are rewarding to longtime readers. But it’s the police procedural part that kept me glued to the page until the ending.

Read an excerpt from Leverage in Death!