Review: Invitation to a Bonfire by Adrienne Celt 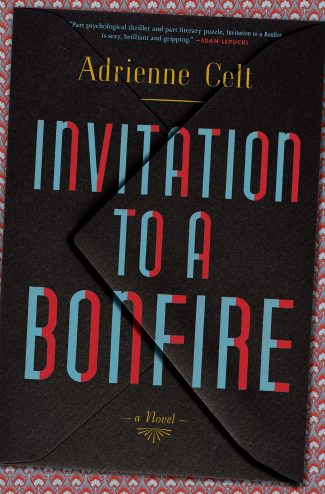 Invitation to a Bonfire

Invitation to a Bonfire by Adrienne Celt is the seductive story of a dangerous love triangle, inspired by the infamous Nabokov marriage, with a spellbinding psychological thriller at its core.

Zoya Andropova doesn’t feel like she belongs in the all-girls boarding school she finds herself in. After being shipped out of the newly-minted Soviet Union, 1920s America is an enigma to her. The American girls don’t know how to handle the strange, quiet girl among them. Zoya, for her part, has a tendency to hero-worship girls who seem to handle things with grace—like fellow Russian Vera, who Zoya knew in her youth and who now appears on American soil with her husband, Lev.

Lev, an accomplished author, is charming and attentive—a pairing that makes it difficult for Zoya, an inexperienced young thing, to resist. Soon Lev, Zoya, and Vera are in a tangled love triangle that is more dangerous than romantic.

Written in alternating diary entries, letters, and newspaper articles, Adrienne Celt’s Invitation to a Bonfire builds slowly, asking the reader to read between the lines of what is said—and what the end results are. Zoya’s diary dominates the narrative, but she’s hardly the lone voice in this story. Celt is subtle and artful in what information she disperses throughout the story.

The novel begins with Zoya describing why she’s writing the diary: “…not posterity, but instead to take a sharp, bright pin and use it to bore a hole….” Which seems like a noble goal—to presumably provide a way into the truth. However, it’s immediately evident that Zoya might not be entirely trustworthy. The first few paragraphs are about how she will burn this diary. In some beautiful prose, Zoya explains that she knows how to build a fire hot enough to turn the pages into ash. But if she wants to shine a light on the truth, why burn the pages that tell that truth?

Over and over, Celt gracefully introduces a piece of the puzzle only to bend it later and leave you questioning what you’ve learned about the narrator.

Zoya describes her early life in Moscow—her father’s involvement in the Party, his death, her mother’s death—and how she wound up in New Jersey. She even describes, in detail, how she was born on the kitchen floor. There is every reason to cheer for her.

But there’s something … weird … about her that the girls of the boarding school sense, though it’s easy for the reader to dismiss this as distrust of the foreign or some kind of superstitious bunk:

“You’re a spooky one. You know,” she [Cindy] gestured around her head, as if chasing off a cloud of gnats. “Woo-woo. So anyway, we need you to help us with a project.”

At this point, a touch of affront might’ve done me good, or at least a bit of skepticism. But I was dazzled by the idea that Cindy, or anyone, had thought about me as any kind of person at all. I didn’t know what “woo-woo” meant, but between her nervous stand and her hand-waving, I could guess. And in fact I was opposed to having a reputation for witchiness. It meant there were girls who had looked at me, girls who had whispered and seen something in me that I had no idea was there. Plus, it was a lot less pathetic than I expected.

Invitation to a Bonfire is—forgive me—a slow burn. The three characters are introduced pieces at a time. Then, other bits join the earlier pieces like a small gathering of kindling, if you allow me to stick with the metaphor. (Which Celt sets up in her opening paragraphs.)

First, you have Zoya and how she sees her relationship with Lev and, by extension, his wife, Vera. You begin to see that Zoya has many layers, and some of them might not be as kind as you think initially.

But Zoya’s isn’t the only voice.

The reader meets Lev via his letters to Vera. In an early letter, he presents himself as a man just trying to give Vera what she wants (information about previous relationships, specifically with a girl named Dina). The tenor of the letter is creepily seductive. However, no woman really wants to receive that much information about their significant other. His second letter, if it’s meant to make her feel better, should ring some alarm bells, however:

I hope you aren’t moping over poor doomed Dina. Such a minor creature to make such a great red stain over our lives. Don’t let her. Dina’s hair was dark, but not so dark as yours. Her skin was white, but yours is milk. Yours is clean teeth, and the tongue that licks them. You know this. The tongue my tongue, counting your incisors and bicuspids, counting your fingers and toes. Poor Dina had a single candle in her hand, whereas you have ignited a thousand fatal fires with just the tip of your thumb. Judicious and useful. Les petites morts de Vera. I could recite them in front of bishops and have them declared holy, like the deaths of saints. This one in a moving car. This one leaning against the door frame. This one on a fainting couch, your father in the very next room, waiting to pour us glasses of gin. Whereas Dina had just one death, slow and dumb. Lying her bed, as still as a virgin.

You know, I have at times, considered shooting you in the gut just to see how differently you’d take the pain. The distinction, I think, would be enormous. Not wan, but angry. Your face alive with terse revenge until the moment it was not. Every second a mortal danger to me, as your precious blood drained out into a puddle round my feet. I would not want to cross you, Vera; it would be safer to kill you.

Not the most romantic letter a girl could ever receive—but he is a writer, prone to the dramatic.

Adrienne Celt’s Invitation to a Bonfire will infiltrate your subconscious and make you read passages twice, maybe three times. You’ll think, Did I read that right? Did this character actually say what I think they said? And you did read that right. That character really did say what you thought they said. When the threads—like lit dynamite fuses—hit their target, you’ll get way more than just a bonfire.