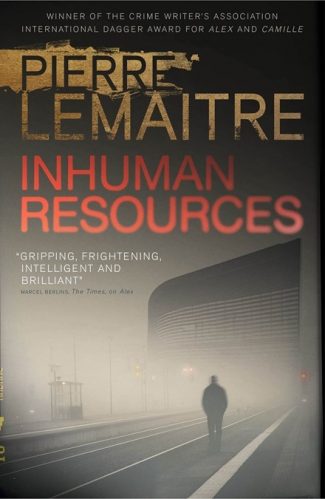 Inhuman Resources by Pierre Lemaitre follows a man stuck in a loop of dead-end jobs who’s finally offered a chance at a new career ― but at what cost?

Remember the movie Falling Down with Michael Douglas? If you’ve seen that movie, you’ve got a pretty good idea of the general idea behind Inhuman Resources by Pierre Lemaitre. It’s been four years since 57-year-old HR manager Alain Delambre was laid off from a jewelry company, and he hasn’t found a good job since. His current job sorting packages for a pharmaceutical company is no exception. He’s treated like crap and disrespected continuously. The last straw comes when his manager, Mehmet, literally kicks him in the ass after losing his cool over a missing code. But Alain isn’t one to take anything lying down.

That’s when I did something for the first time in my life: I lifted my head back, very slowly, as though I was admiring the ceiling of the Sistine Chapel, and then whipped it forward with a sharp motion. Just like I’d seen on television. A head-butt, they call it. Charles, being homeless, gets beaten up a lot, and knows all about it. “Nice technique,” he told me. For a first-timer, it seemed a decent effort.

The whole situation doesn’t bode well for Alain’s future, but when he gets a letter from BLC Consulting offering him an opportunity to score a job with prominent company Exxyal Europe, he finally sees a light at the end of an increasingly long, dark tunnel. His wife, Nicole, is ecstatic. She knows what not being gainfully employed has done to Alain’s self-esteem, and their marriage ―and bank account ― has suffered for it as well. She’s optimistic and supportive until Alain reveals what he will face during the recruiting process. BLC Consulting wants to use an unusual process to weed out undesirables: a role-playing exercise where armed commandos will enact a hostage situation. Anyone with a sense of self-preservation would most likely recoil from this, and Alain has some reservations, but his desire for more meaningful and lucrative employment dulls that voice of reason that keeps trying to assert itself.  This enterprise is called the Hostage-Taking Simulation Plan and has the potential to be as terrifying as it sounds. Alain is not to be deterred, however, even when Nicole flat out tells him that she won’t support it.

Alain wants to make sure he has every advantage and will do just about anything to do it. He even shakes down his own daughter for the money to hire an investigation firm to dig up dirt on his fellow candidates, telling her that he and her mother need it to survive. Pretty rotten right? The thing is, Alain knows it’s vile, and it doesn’t slow him down one bit. There’s definitely something to be said for that kind of sociopathic determination.

When it comes time for the operation, the POV switches and readers get a glimpse of Alain from a completely different point of view. It’s a striking and clever bit of storytelling, because the narrator almost immediately makes a decision about Alain. His first impression:

His face was haggard, almost deathly pale. He had clearly cut himself shaving as there was an unpleasant red scab on his right cheek. A nervous tic made his left eye twitch intermittently, and his palms were sweaty. Any one of these symptoms would have been enough to suggest that he was feeling extremely out of his depth in this situation, and that he had little chance of seeing it through to the end.

In fact, he makes a call to the powers-that-be with this recommendation:

“Monsieur Delambre strikes me as being in very poor shape. I think he’s a nonstarter.”

Things aren’t looking good for our anti-hero, but of course, they’ve underestimated Alain. Even though we know that the hostage situation isn’t real, Lemaitre manages to make the entire sequence pretty terrifying, revealing the strengths and the weaknesses among the candidates in the midst of a pretty realistically staged scenario (or so it seems.) Of course, Alain has a surprise for everyone stashed up his sleeve. To reveal much more would be to risk spoilers, but it doesn’t disappoint, and the denouement makes a wry sort of sense, especially in a world where troublemakers so frequently cash in from their misadventures.

Lemaitre manages to mine some wild, dark, and desperate humor out of an almost ridiculously horrid situation, and strangely, it works. You’ll find yourself laughing quite a lot, entirely despite yourself, at this genuinely effective look at what can drive someone to completely cross the line. You may not like Alain, but it’s likely that you’ll sympathize with him a little bit, even as you wince as he spirals out of control. This is a disturbing, and disturbingly funny, satire that will resonate with anyone that’s had to navigate the inhumanities and inanities of corporate employment or shabby treatment at the hands of superiors.