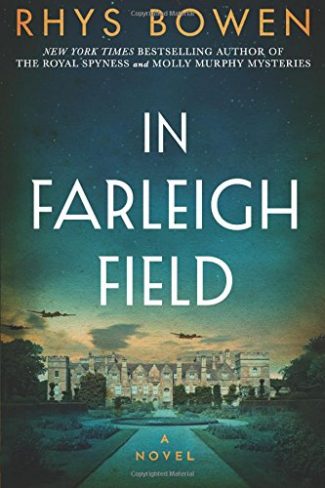 In Farleigh Field by Rhys Bowen is inspired by the events and people of World War II, crafting a sweeping and riveting saga of class, family, love, and betrayal.

No war holds readers—and writers—more in thrall than the Second World War. Consider Philip K. Dick’s 1962 “alternative history novel” The Man in the High Castle. It imagines a world fifteen years after the victory of the Axis powers and forms the basis of a successful series on Amazon. Decades later, Philip K. Dick’s “what if” scenario is still intriguing.

Rhys Bowen’s In Farleigh Field invites readers to go back in time to just before and immediately after Great Britain went to war against Germany. Students of history know that England was not “one voice” in the years before Great Britain finally declared war against Germany. Who can forget Prime Minister Neville Chamberlain’s attempts to “achieve peace in our time.” But that approach was not successful, even though many English people pinned their hopes on Chamberlain’s attempts at diplomacy (characterized by some as appeasement).

In Farleigh Field opens in August 1939, with a quintessentially British activity: a community cricket game in the Kentish village of Emsleigh. Is that not the very definition of decades of village life? Nothing has changed, seemingly, yet everything has, as witnessed by the conversation between Ben Cresswell, the vicar’s son, and Colonel Huntley, “formerly of the British army”:

“Oh yes. Absolutely. No question about it. That blighter Hitler’s going to march into Poland, and we’re honour-bound to declare war. In the next couple of weeks, I’d say.

He spoke with the cheerfulness of a man who knows he is too old to be called up. “We had one of those civil-defence chappies round at the house last week. They wanted me to dig up the back lawn and put in an air-raid shelter. I told him it was quite out of the question. The back lawn is where the memsahib plays her croquet. We’re going to be rationed in everything else. You can’t expect her to give up her croquet, too!”

Enter stage left Lady Pamela, the third of the five daughters of “the Earl of Westerham, owner of Farleigh Place, a stately home in Kent.” Ben has always had a soft spot—perhaps more—for the elegant Pamela, even though “Pamma” yearns for their mutual neighbor Jeremy Prescott, son of a city financier and “RAF flying ace.” The halcyon day ends in comical tragedy: Jeremy takes Ben up in a plane that crashes. And, of course, Colonel Huntley was correct on every point.

Germany invaded Poland on September 1, 1939. Since Great Britain had pledged military support to Poland if it were attacked by the Germans, it subsequently declared war against Germany on September 3, 1939, hence beginning World War II.

Who can resist sharing what Prime Minister Winston Churchill said on October 1st, 1939, when asked whether Russia would enter the ranks on the side of the Allies? “I cannot forecast to you the action of Russia. It is a riddle wrapped in a mystery inside an enigma.”

The cricket game is a prologue to the heart of In Farleigh Field. Part 2 opens on May 1941, at Bletchley Park, Churchill’s “Secret Intelligence and Computers Headquarters.” Pamma works there; Ben, in the all-too-common words of men working on secret projects, works “for a government department”; and Jeremy is a flying ace. Their lives intertwine and intersect in a thrilling fashion because Ben’s task is to follow “a trail of spies and traitors, which may include another member of Pamela’s family.”

I’ll leave you with an historical note from author Rhys Bowen: “This is a work of fiction but is closely rooted in the truth.” In Farleigh Field is an exciting page-turner, but it’s more than that—it is an excellent novel for anyone who concurs with philosopher George Santayana’s words, “Those who cannot remember the past are condemned to repeat it.”