Book Review: I Know a Secret by Tess Gerritsen

August 14, 2017
I Know a Secret by Tess Gerritsen is the 12th Rizzoli & Isles novel, where the pair pursues a shadowy psychopath keeping secrets and taking lives (available August 15, 2017). 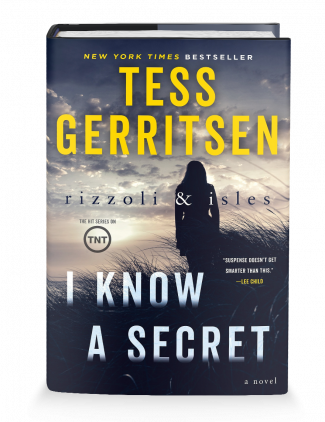 I Know a Secret

After seven seasons on the small screen, Rizzoli & Isles bid farewell to its loyal audience nearly a year ago. Fortunately, Boston Homicide Detective Jane Rizzoli and Medical Examiner Maura Isles pre-existed their celluloid counterparts, and New York Times bestselling author Tess Gerritsen has no plans to retire them from the page. The dynamic duo returns in I Know a Secret—the first series entry since 2014’s Die Again and 12th overall.

It’s winter in Boston when Rizzoli and Isles are summoned to the home of indie horror movie producer Cassandra Coyle, who’s been found dead in her bed. Despite the lack of blood or any obvious cause of death, it’s clearly a case of murder: the 26-year-old’s eyes have been removed (postmortem) and placed in the palm of her hand. Is this the work of a sadistic killer acting out his own scary movie, they wonder, or is there some other meaning to the perverse imagery? The discovery of a second corpse, also felled in a symbolic fashion, suggests that their perpetrator is making a statement—and that there are more names on his/her hit list.

Beyond professional stressors, both Rizzoli and Isles are mired in personal conflict. Jane’s mother, Angela, is on the cusp of a nervous breakdown after having taken her philandering husband back only to suffer continued humiliation at his machismo; Jane’s role as mediator is an unenviable one, yet she is forced to make a stand. Meanwhile, Maura’s biological mother—infamous serial killer Amalthea Lank—is on the brink of succumbing to cancer; manipulative to the bitter end, she strings Maura along by proffering a clue to the mysterious deaths that have stymied authorities.

Also weighing on Maura is a re-acquaintance with her former lover Father Daniel Brophy. His unique insights prove critical to understanding the murders but also open the proverbial door to a(nother) blurring of boundaries. Their tortured romance is further complicated by the oft divergent notions of religion and science.

The story unfolds in alternating perspectives, which serves to amplify the tension. As always, the dual protagonists are revealed through the use of a limited third-person narration while the intimacy of a first-person raconteur is offset by her enigmatic nature. Needless to say, the characters converge in dynamic, diabolical ways and, in doing so, reveal past events that continue to haunt present day. This particular thread involves survivors of alleged sexual abuse and allows Gerritsen to explore “false memory syndrome”—a condition where one’s memories are factually incorrect but strongly believed to be true—which has had tragic consequences in real life (think the satanic ritual abuse hysteria of the 1980s) and certainly adds a compelling wrinkle to the page.

Gerritsen continues to surprise with the depth and range of her storytelling ambitions. Born from a love of genre films, I Know a Secret equally benefits from the author’s recent experience with writing the screenplay for a horror pic (Island Zero, directed by her son, Josh); indeed, she captures the passion and tenacity of indie filmmaking while playing with long-held cinematic conventions. Like the best of big-screen boogeyman blockbusters, there’s complex villainy, a distortion between appearance and reality, and a third-act plot twist that will both surprise and satisfy. This one’s a tasty treat with substance—and minus the calories of popcorn.