Review: I Am Behind You by John Ajvide Lindqvist 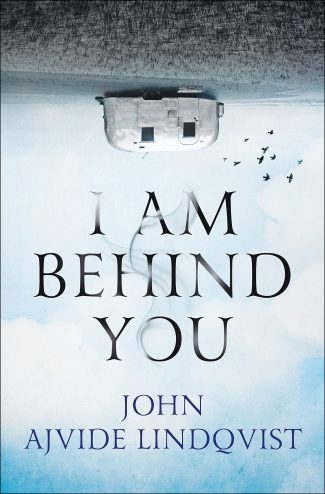 I Am Behind You

A compelling, eerie new novel from John Ajvide Lindqvist, the internationally bestselling author of Let the Right One In.

Lindqvist’s I Am Behind You is easily one of the weirdest books of 2018. It occupies a rare interstitial space between mystery, literary fiction, philosophy, horror, and surrealism. The plot is deceptively simple, but the way the author cracks open his characters’ past and their psyches make this a wonderfully multilayered novel that is as entertaining as it is confusing and hard to decode.

In I Am Behind You, four families spending time in their trailers next to a beautiful lake wake up one morning to find that the place they were in is and isn’t the same. All of them, along with their possessions and trailers, moved during the night. They are still in the camping grounds, but everything that was around them, including trees and the body of water, has disappeared. Instead of a spot in the map of a bigger world, they find themselves surrounded by an endless expanse of grass and a blue sky devoid of a sun. There are no sounds. No birds or insects. No people, cars, or buildings. There are no flowers. Every radio plays artists who perform nothing but songs written by sixties pop icon Peter Himmelstrand. The group sets out on expeditions, and tries to build a small tower to see if they can get better cell phone signal, but the green expanse appears to be infinite. Then the worst things from their pasts start materializing and bizarre figures resembling old, faceless men start to show up. What starts as a confusing morning soon turns into a desperate race to understand what’s happening in an attempt to get back to reality.

I Am Behind You wastes no time submerging readers into a dark, weird, confusing world. The people caught in the situation react individually and as part of the group, and no one panics at the start. Instead, they try to analyze the situation and study their surroundings. The results shatter their resolve and desperation creeps in:

They had thought the sun would reappear, that it was lurking below the horizon, but the minutes and the hours pass, and there is no sun. It is an absence so great it is impossible to comprehend. The things we take for granted are the things we miss the most when they disappear.

Lindqvist is a master of mood, and this narrative mostly hinges on his ability to quickly create and then sustain an uncanny atmosphere as he slowly injects horror elements. The characters all try to understand the situation in their own way, but none find a satisfactory answer. As they attempt to cope, the worst experiences from their past start to manifest in their new (non)space. Nightmares come at them in plain daylight. Memories that have followed them for years literally show up to haunt them. This allows the author to explore the importance of memories:

To what extent can we make our memories into a reality? If an event has been imprinted on us with the violence of the branding iron, or the joy of sheer bliss, if it is encapsulated within us like a moment that will live forever, does that also mean that we can really go back there, to some degree?

There is nothing straightforward about this novel. Everyone is lost. Time comes and goes as chunks of the narrative revisit a special occasion in a character’s life. No explanations are given. For some readers, trying to understand what’s happening will be a treat. For others, it will be like trying to catch butterflies with their hands in a never-ending field of flowers. Who are the old figures? What do they want? Why is the past coming back and taking shape in the present? Where did the world go? The questions pile up and the answers never come, but that just makes it more fun. Seeing the situation through the various points of views of the characters keeps things fresh and allows Lindqvist to fill his narrative with philosophical conundrums and bizarre explanations:

It is so counterintuitive that another possibility flashes through her mind: that she has got it wrong. That in fact it’s all a very simple; it’s about a way of looking at things. An ant can grasp only two dimensions; if it is placed on a ball, it cannot understand that it will return to its starting point if it just keeps on walking. Something along those lines. Grasping the concept of a ball when a ball is an unknown entity. But how can you imagine something that you can’t imagine?

In I Am Behind You, imagining a reason we can actually imagine is the challenge. Language and horror converge in a world of confusion and fear. That Lindqvist can keep that up for more than 400 pages is a testament to his storytelling skills.

Those who appreciate labyrinthine storylines and unstable narrative ground will find much to enjoy in this novel. Those who prefer forthright stories should probably stay away unless they are willing to embark on an adventure far removed from their comfort zone (which should be done regularly!). Lindqvist is a household name who always delivers thrilling, strange stories, and this one is the strangest yet.