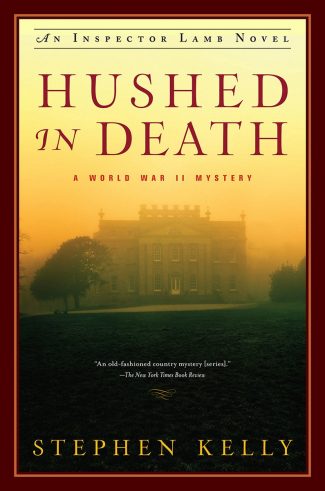 Hushed in Death by Stephen Kelly is the third book in the Inspector Lamb series set in the spring of 1942 at a hospital for veterans in rural England that leaves Lamb with a village full of suspects.

Hushed in Death opens very somberly. The Elton House’s gardener Joseph Lee is discovered floating in the pond, his body suspended like a “leaf caught in a current.” Detective Chief Inspector Lamb and his team arrive on the scene. Stephen Kelly captures the scene with deft precision.

Lamb stood by silently, taking in the scene—the pond, the surrounding woodland, the worn muddy path to Marbury, and the gray, ivy-covered estate house on the hill, surrounded by long-neglected grounds. It had rained the previous morning, but not since. Still, the late April air remained moist and chilled. The spot reminded Lamb of the vaguely eerie rural places in which the Thomas Hardy novels he’d been required to read as a schoolboy, had been set; places that always had seemed to him sodden with sorrow.

“Sodden with sorrow” captures the troubled mental state of the inhabitants of the formerly grand Elton House: it’s now a sanctuary, a sanitorium, “transformed into a hospital for “shell-shocked” officers sent back from the front lines.”

Detective Chief Inspector Lamb is an intriguing character. His life’s experiences, specifically, his time in the Somme trenches during World War I, influence and expand his understanding of the mysterious happenings at Elton House in the spring of 1942. In today’s parlance, Lamb had—and perhaps still has—PTSD, the shell-shock of earlier times. Dr. Hornby, who heads up the Elton House Sanatorium, challenges Lamb that he may have lingering “psychological effects of combat,” and then apologies for his inquisitiveness.

“No need to apologize,” Lamb said. Then the words escaped his mouth before he’d even had a chance to compose then: “Nightmares, mostly. Not as often as before, but they still come at times. And faces. I sometimes see faces and shapes. Faces and shapes of men who were lost.”

Another modern aspect of Hushed in Death is Vera Lamb’s struggles with her role. Her father privately acknowledges her skills: he knows his daughter is “spirited, confident, and brave.”

But she was merely his driver, and merely a young woman, an auxiliary constable who owed her job to the coming of the war and the resulting shortage of men and her father’s unfair intervention on her behalf…

It is highly unusual for a woman to be part of an investigative team, and Vera being his daughter raises questions of nepotism. Nonetheless, Vera’s observation skills are integral to the investigation. Lamb awkwardly finesses his fatherly and supervisory relationship with Vera. He senses his daughter wants to move on with her life: that she’s subconsciously readying herself to flee the nest. She’s no ordinary driver Lamb acknowledges. Ordinarily, his driver would wait for him in his car, but Lamb throws Vera a bone.

“If you get bored, you might have a look round the grounds,” he said. He touched Vera’s slender arm and said in a fatherly tone, “I’ll fetch you when we’re ready.”

Vera looked at her father. Lamb believed that she wanted to say something to him; her expression contained almost a quality of beseeching he thought. He waited several seconds for her to speak, but when Vera said nothing, he said, now in his Chief Inspector’s voice, “All right, then. Carry on.”

And carry on she does. Vera’s discovery of a “stick of Wrigley’s Spearmint Gum, wrapped in a plain brow, waxy paper with green lettering,” is a breakthrough for the investigation. Vera notes that “since the war began such American luxuries had all but disappeared in Britain,” so why is there a stick of American gum on the sodden ground of the Elton estate?

Mysteries that are set in stately homes have a special appeal. Storage rooms and ante-chambers and smuggler’s caves of an earlier time are often put to nefarious use decades later. Such is the case in Hushed in Death, the third in Stephen Kelly’s Inspector Lamb series. The mystery is rooted in the past of the estate and its current inhabitants.

The surface, Lamb thought. All of the bits and pieces—the secrets and lies—now were coming to the surface, like so much detritus breaking free from a sinking ship.

Readers will be caught up in the mystery of Elton House as Inspector Lamb weaves together the complicated strands of an often-surprising story to uncover the truth.