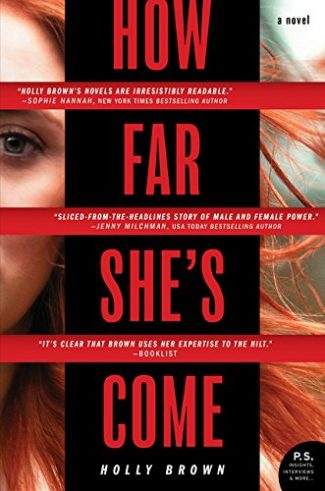 How Far She’s Come by Holly Brown is an unforgettable, harrowing story of a young broadcast journalist who discovers a mysterious diary from a female broadcaster in 1991 featuring startling—and frightening—parallels to her own life.

Holly Brown takes on being a woman in the cutthroat—and still decidedly men’s—world of broadcast journalism in her new thriller, How Far She’s Come. Cheyenne Florian is a 24-year-old recent Stanford graduate still reeling from a bad experience stemming from a post she made as a vlogger. It resulted in her phone getting hacked, exposing personal (nude) photos to the world. Since then, she’s been threatened with everything from plain physical assault to all-out rape, and she’s not all that anxious to be back in the public eye.

Then, she takes a meeting with billionaire Edwin Gordon.

Edwin is in his early forties, his dark hair silvered in a way that looks strategic and a ridged forehead that’s supposed to signal he’s eschewed Botox, though the rest of his tanned face is suspiciously boyish. He’s not exactly handsome, but his level of power makes up the gap so that he’s just about the most attractive man I’ve ever seen in the flesh.

“I want to help you turn it all around, “he says. “To use what happened to you to make a difference.”

“What are you saying, exactly?”

“I’m here to offer you a job. I watched your video. All of them. I was following you for months before everything happened. Scouting you.”

Honestly, this is one scenario that never crossed my mind.

Edwin wants Cheyenne, but he claims it’s not for her body. He wants her to be a bold new face on his new network, INN, which claims to be a truly nonpartisan news source. This is exactly what Cheyenne wants—to work for a network that isn’t beholden to any special interests, where she can report real news that makes a real impact. It’s an offer she feels she really can’t refuse, and Edwin succeeds in locking her into a three-year contract.

Her new opportunity calls for her to move to New York City, much to the consternation of her live-in boyfriend, Chase. Long-distance relationships are hard, but she and Chase always made it clear that careers come first, and this is the chance of a lifetime. Or so Cheyenne thinks. She’s also eager to show her beloved father, who is suffering from cancer, that she can move on from what happened to her and make something of herself.

The meet and greet with the INN staff goes fairly well, and she’s looking forward to her on-screen debut. At her new workstation, she finds a letter from someone extending their congratulations—someone that states they want her to succeed. Too bad they didn’t actually sign the letter. It’s strange, but even stranger is the photocopied diary pages included with the letter. Turns out they’re from the 1991 journal of Elyse Rohrback, a newsreader on a show called Morning Sunrise who was evidently brutally attacked. Why would someone want Cheyenne to read this diary? What could it possibly have to do with her?

In spite of that bit of weirdness, her on-screen debut goes okay—especially since it’s not a live shoot, so there’s room for editing. But Cheyenne feels every man’s eye on her, except for Albie, her “handler.” This is nothing new for Cheyenne, but it was a bit of a quibble for me. Cheyenne is beautiful. We’re alerted to that at the outset, and it’s repeated many, many times. This is fine because part of the story’s foundation lies in Cheyenne’s desire to make it despite her looks—not because of them—but it’s a near constant refrain. Inevitably, this causes some friction on set as she must contend with the leers of some of the guys and the scorn of some of the ladies. Par for the course, though, I suppose.

Things seem to be looking up when Cheyenne gets an assistant, Reese, and she even seems to have an ally in another show’s host, Beth. She’s still swimming in shark-infested waters, though, and Elyse’s diary strangely seems to largely mirror her own experiences. I really enjoyed the throwback sequences in the diary, which take place in a time when women were really coming up in broadcast news. Even though things have changed, some things certainly haven’t, and that’s Brown’s focus. As Cheyenne gains an audience and a following, she learns anew that celebrity status can have a steep price.

Brown really succeeds in bringing to light the rigors of TV-news production and the constant climb to “make it” in the business, and I for one wouldn’t want any part of it. Cheyenne is a trooper, however, and she puts up with a lot of crap. A lot. Brown also has something to say about women being more supportive of each other instead of engaging in so much sniping, backbiting, and limitless competition.

Cheyenne does some impulsive things in this book, but no one is perfect, and although she’s wildly gorgeous, I appreciated how flawed she is. Her decisions aren’t always the right ones (e.g., she lets it all hang out on a trip to the Hamptons, and TMZ gets wind of it), but she does strive to do the right thing. As the tension mounts and the controversy swirls, Cheyenne is going to need all her wits about her to make it out intact. A neat little twist at the end tops off a tale that’s by turns salacious and timely but always entertaining.