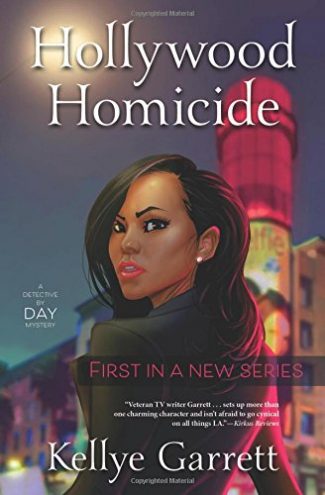 Hollywood Homicide by Kellye Garrett is the first book in the Detective by Day Mystery series.

Hollywood Homicide, the first Detective by Day Mystery, tosses you right into Hollywood, a scandalous murder, and one retired actress’s quest for the truth—while she also attempts to keep herself employed and prevent her parent’s from losing their house.

It’s easy to relate to Dayna Anderson. Opening on one of the world’s worst job interviews, Dayna’s dry, self-deprecating tone draws you right into her story. I immediately wanted to know how she was going to manage and when she was going to get a break. Mystery novels often feature amateur detectives bore from people down on their luck, but Dayna’s tale has an immediate flavor of reality. You can feel her irritation at being boiled down to a catch phrase and a dress size. I immediately empathized with her, in spite of this, needing a payday.

Having had fleeting fame, I was not recognizable as much as familiar. The familiarity was courtesy of the Chubby’s Chicken chain. For almost two years, I would somehow end every situation—and commercial—with the catch phrase: “Don’t think so, boo.” If the scene called for me to be really upset, I’d even give a quick little finger jab, a long neck roll, and a sophisticated sucking of my teeth. Rosa Parks would be so proud. Eighteen months ago, Chubby’s had abruptly ended my contract with the all too standard “We are going in a new direction” spiel to my now-former agent. Silly me had been under the impression Chubby’s would be just the beginning, not the end. I knew there was more in my future than just chicken wings. I was wrong and was now officially unofficially retired from acting.

Of course, things only get worse after her misadventure at the coffee shop job interview. When you’re broke and have an unreliable car, the fear of having car trouble at an intersection is all too real. The car stalls. It won’t start up again. You feel embarrassment and anger—and then resignation. But it’s this event that sets Dayna on her path toward mystery.

A billboard near the gas station (Dayna carefully counting out her dollars and cents and praying she can get enough to drive the ten minutes home) attracts her attention as she desperately looks for a distraction from yet another person who vaguely recognizes her from her stint as a chicken spokesperson. A pretty blonde-girl, a plea for information about the hit-and-run that took Haley Joseph’s life, and a reward: $15,000. None of these things go unnoticed, but it’s the date of the hit-and-run that really catches Dayna’s attention: August 18th. A night she remembers all too well.

It was the last night she saw him. Omari, a childhood friend and newly minted rising star in a cop drama—and if the drunken behavior is anything to go by, maybe more. The awkward relationship is a definite highlight; it’s not a huge portion of the book by any means, but its presence is felt throughout and impacts the investigation.

The realism is one of the things that struck me over and over again. It was so relatable. The constant uncertainty over money doesn’t become irritating either; it’s there, it’s present—it’s absolutely necessary.

It turns out three dollars is in fact enough to get you to Beverly Hills.

I’m sure that would come in handy the next time I ran out of gas. Considering my tank was already back on E, it probably would be sooner than later.

While Dayna’s drive to find the person who killed Haley Joseph is first motivated by her monetary needs, it’s quickly evident that’s not the only thing driving her.

I truly enjoyed the definite feel of being in contemporary time, watching characters sort things out as I would probably end up sorting them out. Don’t know something? Well, we have smartphones and Google. Problem solved. The phones were nearly characters of their own, really, which is pretty true to life for many of us.

It’s clear that Dayna has a lot to learn in order to become a successful sleuth, but she’s definitely willing to take on the role. With the best/worst friends ever, Dayna has a strong team on her side. She’s determined to solve a case that has as many twists and turns as a Hollywood blockbuster. Kellye Garrett handle’s it all with a deft touch, humor, and realism that kept me glued to the digital page. I laughed, buried my face in a pillow from embarrassment, walked away groaning—and still kept coming back.

Dayna deserves all of the sweet potato cupcakes she could possibly want, and I look forward to seeing her get them in another installment of the series.