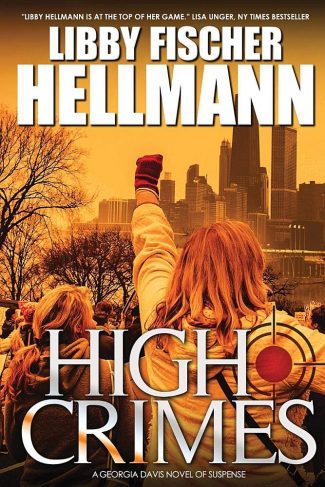 Author Libby Fischer Hellman’s latest Georgia Davis novel, High Crimes, asks: how do you solve a murder when there are 42,000 suspects?

Ripped-from-the-headlines plots are tricky things—often, the hook is irresistible, but the nuance necessary to keep the story humming is missing. That’s unfortunately the case in High Crimes.

The book finds Davis, Hellmann’s long-time hard-boiled protagonist, investigating a hyper-political murder with thousands of suspects. Dena Baldwin, the de facto leader of a “Resistance” Facebook group dedicated to protesting the current presidential administration, is assassinated during a rally in a Chicago park. The gunman, stationed on a nearby rooftop, commits suicide via an IED before the authorities can catch him. Baldwin’s mother, however, believes there are other forces at work behind her daughter’s murder and hires Davis to track down the culprits.

It’s a great premise that’s ripe with possibility, but Hellmann never digs deep enough into all those ideas. Dena’s Facebook group is one example—it’s presented as a radical political organizing force, but when the group’s core members, all of whom Davis regards as suspects in Baldwin’s murder, talk about it, it sounds more like what most Facebook groups really are: places to vent on a large scale.

“What about enemies? Did she have any?”

He couldn’t be that naïve. “Come on, Curt. A woman who stakes out radical positions like Dena had to alienate some people.”

“Well, of course. We had trolls. And bots,” he said. “I thought you meant personal enemies. People she knew.”

Georgia eyed him carefully. Was he holding back? “Did she ever talk about anyone on Facebook, like, for example, other members of the group? For better or worse?”

There are token mentions of bots, Russian trolls, and some vague hints at data mining. But none of it coheres. The Facebook group is alternately powerful and significant or small and meaningless. At one point, a member tells Davis that the group was headed for an ideological split over Dena’s idea to add anti-fracking activism to the group’s repertoire. It’s one of many stretches that reveal Hellmann’s reluctance to blast through the headlines on which the book is based in order to find more interesting territory.

The central mystery kicks off with an anonymous email to Dena’s family that tells them to “find the beef jerky.” It’s another through-line that doesn’t work. It’s hastily sketched out and leads to some wheel-spinning passages that just seem silly:

Georgia Googled IEDs and beef jerky. There was no connection. She tried Bushmasters and beef jerky. Nothing. Dogged determination kept her at it. She had no idea what time it was when Jimmy’s light snoring told her he was out. She checked the clock. After nine. She’d been working for over an hour.

Hellmann’s characters are similarly patched-over. Dena and her brother are involved in a family foundation that exists mostly to provide some red herrings, and her father is supposedly a high-powered Paul Manafort-esque lobbyist and fixer in Washington, D.C. who, ultimately, disappears mid-book. A handful of awkwardly-paced flashbacks fill in the history of Dena’s Facebook group, some various group conflicts, and, surprisingly, how the murder plot all comes together. It’s a disappointing narrative move, as Hellman doesn’t even give her protagonist the spotlight when it comes to solving the mystery.

Georgia Davis is the book’s bright spot, a tough, dogged detective who follows her case to posh Washington neighborhoods and remote Minnesota cabins. The D.C. leg of Davis’ investigation is especially great, full of action and hints at a broader conspiracy. Watching her work this case is fun, and it’s a shame the plot doesn’t rise to meet her strengths as a character. The supporting cast is great, too, though a side plot involving Georgia’s half-sister and their estranged mother drags down parts of the book.

There’s a lot of potential in High Crimes but it’s never realized. It may be the result of a mismatch between the protagonist and the plot: Davis is a street-level PI and the book’s plot, by the end, is more in line with a large-scale political thriller. When Georgia Davis is haunting dive bars and breaking in to apartments, Hellman’s writing shines. But once hackers, dark-money lobbyists and right-wing goon squads enter the picture, the book’s momentum sputters. It’s a jump in scale that Hellmann doesn’t seem comfortable with. That’s a shame, because, as characters go, Georgia Davis is more than up for the job.