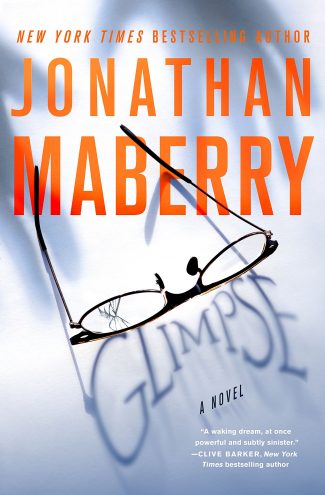 Glimpse by Jonathan Maberry is a chilling thriller that explores what happens when reality and nightmares converge, and how far one will go to protect the innocent when their own brain is a threat.

I love the genres of crime and horror. While great on their own, they combine together perfectly like a genre Reese’s Cup. Last year, while watching Showtime’s Twin Peaks revival series, I was reminded that much of my thoughts on the blending of crime and horror were shaped by the ’90s cult series. The way the show mixed the small-town shattering murder of a young woman with surreal, nightmarish figures and forces was enthralling and still captivates me today. So I really enjoyed Jonathan Maberry’s (another writer I’m a huge fan of who is an expert at combining horror with other genres like crime and action/adventure) new novel, Glimpse, which mixes crime and horror with surreal elements that would give even David Lynch fans the shivers. It’s a riveting fantasy/mystery novel and a moving tale about the power of love between mother and child.

Much of the criminal elements in Glimpse come from the life its protagonist, Rain Thomas, has led and the choices she’s made. When we meet her, she’s a recovering drug addict who lives in a rough neighborhood and is trying to make a better life for herself. Some days that comes easy for her, and some days it takes all her strength to not collapse and give into her addiction.

Rain Thomas cried because this was another day when she wouldn’t score some rock and smoke her way off the planet. Another day. It was day number one thousand one hundred and six of not using, and it hurt every bit as badly as day one. She hid behind the closed doors of her palms and waited for the tears. Waited. But they didn’t come. Not that morning. It wasn’t a relief, though, because she knew they’d show eventually. They always did. People patted her on the back for getting her shiny pink three-year coin from Narcotics Anonymous. They told her she was strong.

That introduction makes Rain a very human character, which makes it very easy to root for her. As a reader, I wanted her to land the job she was applying for at the beginning of the novel, I was intrigued when she received a pair of mysterious reading glasses, and I was horrified to discover that she was missing a day of time. That horror and my empathy for Rain continued as she comes across a series of surreal, horrific, and possibly supernatural events that seem to indicate she’s either losing her mind or has become the target of dangerous, monstrous forces. Rain’s journey becomes even more poignant and powerful when you learn about the difficult choices she made before the story began—like giving up her newborn son for adoption.

Glimpse is very much Rain’s story, but she’s not facing her ordeals alone. Another moving element of the book is the friends she’s made. They call themselves “The Cracked World Society,” after the Leonard Cohen song. They’re all recovering addicts who help and support each other’s quest to stay clean and survive. The Cracked World Society includes Rain; her sponsor, Yo-Yo; Gay Bob; and Straight Bob. Here, Maberry describes some of the struggles Gay Bob deals with in maintaining his sobriety:

Gay Bob was sixteen months clean from a five-year-long fight with painkillers. He’d been hooked on OxyContin after his slip and fall, and the addiction had cost him a longtime relationship and a good-paying job as a fitness coach. His depression was less obvious and more insidious than Straight Bob’s, because Gay Bob had more practiced social skills and could convince nearly everyone, and sometimes himself, that he was cool, collected, and ready to move forward with his life. Rain had spent a lot of nights taking long and directionless walks with him, talking about different kinds of highs and how much easier it would be to step off the sobriety ledge. She knew how close to that edge he was.

Rain and her friends give the crime elements of Glimpse a gritty, almost David Simon and Ed Burns feel. It’s like their survivors trying to keep their heads afloat in the urban jungles Simon and Burns depicted in shows like The Corner and The Wire. Midway through Glimpse, we’re introduced to another supporting character, Private Detective Gerald “Monk” Addison. His introduction adds a new tone and feel to Glimpse. It injects some classic, gritty P.I. elements to the narrative as well as some fascinating supernatural ones. An interlude that kicks off some of the character’s backstory opens with him telling the reader that he sees dead people and also describing how he obtains his clients.

People like her find me. I never ask how they heard of me. In my line of work, the referral process is complicated. I get most of my standard clients from asshole law firms like Scarebaby and Twitch. Yeah, J. Heron Scarebaby and Iver Twitch. Real names. Some people are that fucking unlucky and that dim that they won’t use a different name for business. Or maybe it’s a matter of rats finding the right sewer. Not sure, don’t care. They hire me for scut-work. Skip traces, missing persons. Stuff like that. Pays the light bill, buys me coffee.

They hadn’t sent her, though. I knew that much. She found me a whole other way.

Monk is a really cool character who will very much appeal to fans of Maberry’s Joe Ledger series and John Connolly’s Charlie Parker books (I’m a huge fan of both series). Maberry clearly has a lot of thoughts and ideas about Monk, but to his credit, he doesn’t let his story upstage Rain’s. The writer hints that he has more plans for Monk beyond Glimpse, but the character is there to assist Rain in uncovering the mysteries and horrors intruding upon her life.

I haven’t said much about those mysteries and horrors because part of the fun of Glimpse is encountering them for yourself and trying to figure out what exactly is going on. I will say that much of Rain’s struggles involve a monstrous boogieman named Doctor Nine, who to go back to the Twin Peaks comparison I made earlier, is a malevolent spirit just as scary and intriguing as that show’s Killer Bob. Plus, Maberry doesn’t give you all the answers (that would be no fun), he instead gives you just enough—and they are satisfying answers too.

With Glimpse, Jonathan Maberry, once again, expertly weaves together the genres of crime and horror to create a fun, poignant, and powerful novel sure to please his longtime fans and win him some new ones. Plus, if you’re a fan of Maberry’s work, there’s an added little bonus in a sort of cameo appearance from a great supporting character who has turned up in his other works.

Read an excerpt from Glimpse!