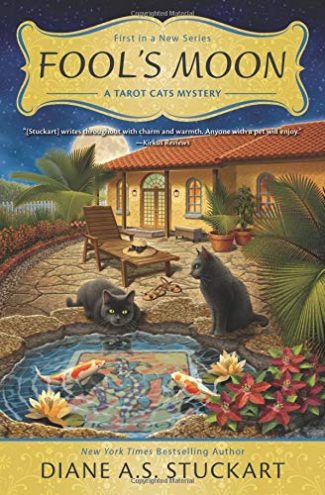 Fool’s Moon by Diane A.S. Stuckart is the first book in the Tarot Cats Mystery series, where two tarot-savvy cats and their tenderhearted human outwit a cruel criminal in this animal-centric whodunit.

Ruby Sparks in filling in for her extremely talented cousin at Botanica Santa Rosa, a metaphysical shop in Miami. This includes giving tarot card readings, which Ruby feels only relatively competent doing.

Brother and sister cats Ophelia and Brandon are separated after their owner dies. Ruby adopts Ophelia, who shows an innate talent for tarot.

Ruby’s gaze swept from the small black cat practically melting off the column in the corner and back to the Tarot card that said cat had just all but tossed in her lap. There had to have been a bug or something on the table, she told herself. No way had her new pet deliberately come over to flip a card to help her out.

Deciding to reserve judgment on that until later, Ruby turned her attention to the new card with its printed image of a plump red heart pressed against a blue sky.

The heart covered a blazing sun so that only a narrow ring of gold rays could be seen, while a threatening black storm cloud loomed above. But, most telling, three gold-hilted swords pierced the heart, one driving straight from the top, and the other two crisscrossed behind it. Not the card was particularly gory, for only a moderate trickle of blood slid down the blade of the center sword. Still, the image got its point across.

I am fascinated by tarot, albeit with a healthy dose of skepticism. As Ruby points out, some of the card art is beautiful and evocative. I own a healthy (unhealthy?) collection of decks myself. Certain decks do seem to be better suited for different reading types.

When Luciana, the housekeeper at Brandon and Ophelia’s previous home, comes in for a reading, Ruby chooses the Rider-Waite-Smith deck. This is the deck most people have seen.

“Murdered?” Ruby stared at the woman in disbelief. “That’s what you want to know, if someone murdered someone else?”

At Luciana’s firm nod, she persisted. “If you witnessed a crime, you should be talking to the police about it, and not me.”

“I already told them all I knew, which was nada … nothing. All I could say was that I found the poor lady drowned in her own swimming pool. And so the police, they decided it was an accident. But I have the suspicion here”—she tapped a closed fist over her heart—“that he was responsible.”

“He? You mean, her son. But why do you think that? I mean, besides a feeling?”

“The old lady, she was a good swimmer. She would go into the water every morning before I bring her the café con leche. And the phone calls. The hijo, he is always on his phone, but he hurries and hangs up if he sees me. And he looks, how do you say, suspicious. Plus there was some other things … thing with papers …”

She trailed off, then seemed to rally. “If the cards say he did it, then I will look for a way to prove it, then I go back to the police again. That is why I ask for the reading, to make sure first.”

Convinced that Luciana is right, Ophelia sets out to find her brother with the help of Zuki, Ruby’s dog. The two hatch a plan to get out of the yard and find Brandon.

I have to admit to some trepidation when I realized the protagonists were talking cats. However, this isn’t Dr. Doolittle. The animals don’t speak to humans. And Ruby isn’t completely clueless without the animals’ help. She works a bachelorette party on her own, impressing the bride and her guests. Later, she gets involved in solving the murder of the cats’ former owner because of her pets. Don’t they always help?

Ruby’s half-sister, Rosa, only appears as a portrait and when Ruby speaks about her. She is out of town throughout the book. Will the Santera return to Miami in the next book? And will she be happy about the new additions at her home and workspace?

She should be. They made this reader happy.