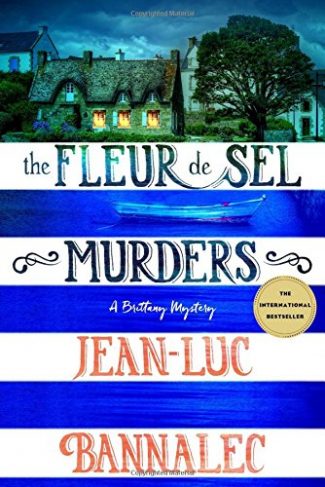 Commissaire Dupin is back in The Fleur de Sel Murders, the third Brittany mystery from international bestselling author Jean-Luc Bannalec.

A lapse in a spattering of crime novels of late is that they are often atmospherically deficient, stagnant—the plots go straight to the ripening corpse with no care for the surroundings. Or when the environs are described, they are so generic in nature that it wouldn’t matter whether a body was found in Central Park in NYC or among the “floating hills” of Pluto. When we peer back at yesteryear, it’s just the reverse; we remember where the great ones lived and worked: Marlowe in Los Angeles, McGee in Fort Lauderdale, and both Kinsey Millhone and Lew Archer in the fictional town of Santa Teresa that McDonald created, which feels more real than some of these newbie gumshoes’ stomping grounds.

Jean-Luc Bannalec has no such peccadillos, has confidence in his storytelling, and introduced me to the French salt marshes of the Guérande Peninsula.

The fleur de sel gave off a curious fragrance of violets in the days after the harvest; it mingled with the smell of rich clay and the salt and iodine in the air that people here in the middle of the White Land—the Gwenn Rann, the far-reaching salt marshes of the Guérande—smelled and tasted more strongly with every breath than anywhere else on the coast. Now, at the end of the summer, the distinctive scent filled the salt gardens. The old paludiers, the salt farmers, used to say that it made people faint sometimes, that it caused mirages and hallucinations.

It was a breathtaking, bizarre landscape. A landscape of the four elements needed for the alchemy of the salt: sea, sun, earth, and wind.

It should be noted this isn’t where Bannalec’s Commissaire Dupin usually plies his craft; he’s somewhat outside his Brittany jurisdiction (also dotingly described), snooping around the picturesque terrain at the behest of a journalist friend, Lilou Breval. Known for stirring the social justice pot, she has disappeared after asking Dupin to investigate the marshes. For his trouble, he’s already been shot at, imprisoned in a hut, and required rescuing by one Commissaire Rose, who doesn’t, at first, take kindly to his trespassing on her turf. Eventually paired by their superiors, they make a grisly discovery:

There was an extreme brutality to it. The dead body in this utterly peaceful scene. They were standing on the ocean floor of a wide bay, in the middle of the Anse de Locmiquel, hundreds of meters of coarse sand with huge numbers of oyster and mussel beds nestled in it. In a few hours, perch would be swimming here again, giltheads, barbs, pollack. The sky was blue, adorned with a few scattered fair-weather clouds like balls of cotton, and the inky blue Morbihan shimmered in the distance, a few hundred meters farther south. Beyond the clearly discernible passage, the open Atlantic flashed, silvery and restless.

It was Lilou Breval. Dupin recognized her from meters away. It looked as though her head had got caught between two wooden struts of the long, wooden oyster beds.

I’m not sure if it’s an issue of translation, but many passages are tripped up by repetition of words (“narrow” makes many appearances) as well as the overly excitable exclamation point! But the worst offender is the use of measurement. I lost count of “not one millimeter,” “after a few more meters,” “not budge a millimeter,” and “a few meters deep” that ran kilometers of chapters.

Principally to Western readers, Georges Simenon’s Jules Maigret is the French detective by which all others are gauged. Close to 50 years after his last case, the gruff, level-headed Maigret steps away from the throng of imitators in defiance to their ordinariness. Perhaps Dupin will evolve to match those giant shoes as his persona in The Fleur de Sel Murders is a bit underwhelming, though making up for any shortcomings is Bannalec’s rich description of the French backdrop.

The Fleur de Sel Murders is a good mystery, and I’m hoping to appreciate the next in the series even more.