Review: Find You in the Dark by Nathan Ripley 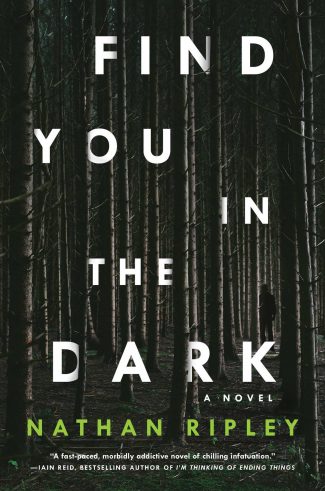 Find You in the Dark

Find You in the Dark by Nathan Ripley is a chilling and disquieting debut thriller about a family man with a habit of digging up the past, which catches the attention of a serial killer who wants anything but his secrets uncovered.

Martin Reese doesn’t have to worry about money. He sold his dot-com company a little while back, and he and his wife, Ellen, and teenage daughter, Kylie, live in comfort. This gives Martin a lot of freedom, which is good because he has a strange little hobby. Ellen thinks Martin loves to get away by himself and commune in the woods. Well, he does. Sort of.

Anything I camped in or sweated in and brought back never came anywhere near the actual site of a dig; my focus when I was at work out there was absolute, but the rush of being right, of finding what I was looking for, could get so powerful I had to have a strict procedure on every dig.

He’s got all the best equipment and tools, which is necessary for the delicate work he does. Secrecy is paramount, even when it comes to his family.

The garage was peaceful, as quiet as the air around me last night, when all I could hear was the silvery chop of my shovel cutting into the dirt above the bones I knew I was about to find. I rehearsed a few lines in my head for the call to the cops I’d be making later that night; I’d been running a few variants on the drive back, testing out what they sounded like in my own voice, a voice I could never let the police hear.

Have you guessed what mischief our hero (antihero?) is up to yet? Somehow, Martin finds the bodies of serial killer victims that were never found. He claims that he wants the victims’ families to have peace and closure. Seems like a noble cause, right? Sure, but I couldn’t help but think—at least in the beginning—that Martin could offer to use his methods to help the police. Go legit. No more hiding his hobby from his family.

But our friend Martin is hiding a few (figurative, maybe) skeletons of his own, and he’s not keen on those getting out. Also, he makes it pretty clear that he gets a bit of a zing out of not only the secrecy but also getting one over on the police and beating them at their own game.

To assist him with his efforts, Martin enlists the help of a rather unpleasant, slovenly cop named Keith, who doesn’t mind stealing files and handing them over to him. You get the distinct feeling that this arrangement might backfire on Martin at some point, but don’t underestimate Keith’s basic stupidity or his penchant for making sloppy mistakes. Still, it’s a tenuous arrangement, and Martin is always alert to what could go wrong.

Martin uses the murder of Ellen’s sister, Tinsley, nearly 20 years ago to justify his searches. Ellen has never gotten over her killing at the hands of Jason Shurn—who is dead but not forgotten—and it’s affected her relationship with Kylie.

At first, it seems apparent that there’s only one person that might get in the way of Martin’s mission:

“We got one of your pet phone calls, Sandy,” Detective Chris Gabriel said, talking to Sandra Whittal over the divider between their desks.

After a bit of back and forth where it’s revealed that not only are they partners but lovers as well (but only casually, Sandy would insist), Chris then goes on to play the new audio:

There was something irritatingly British about the words the caller chose. It was one of the many things that pissed Sandra off and skeeved her out, all at the same time. The room around her had almost emptied out. The guys on duty were next door, eating around the big interrogation table that subbed as a dining table on slow nights.

I found her the way I found the others: by doing your job.

This was as close as the caller got to a signature—on all of the recorded calls Sandra had excavated, there was some sort of finger-wagging admonishment of the police, of the FBI, of lazy law enforcement who were too busy preventing murders to roam the country looking for corpses. This, also, pissed Sandra off.

Chris’s mindset is a little different. He figures there’s no harm since police don’t have the resources to do it and it offers comfort to the families. But Sandy is worried that something darker is at work and the finder’s motives may not be completely altruistic.

There actually is something darker at work, and it comes to light when Martin finally finds what he hoped would be his last set of remains: those of Tinsley Schultz. He’d planned to stop after Tinsley, and he’s ecstatic that he’d finally be able to help Ellen put the episode to some sort of rest—even if she’d never know it was him that found her. But Martin finds much more than just Tinsley down in a grave located at an abandoned cemetery.

The glint was silver, or something silver-colored, and it was inexplicably bright after the length of time it would have spent under the ground. I checked my glove to see if any tears had opened up while I dug, then reached down to take hold of the silver. I pulled.

A fleshy arm and hand that were attached to the bracelet came up and with them came the stench of meat going bad. The stink of a body when it’s just starting to go off. When it hasn’t been dead for long at all.

Oops. Looks like Martin has a fresh body on his hands, and he must fight to keep from panicking. Luckily, he’s got a bit of practice at keeping his cool because he’s going to need his wits about him with what’s to come. Giving away more would contain spoilers, but things really start to take off from here, and the killer called the Ragman sets his evil eye on Martin.

Poor Martin. He’s got to figure out how to outsmart this guy and keep his family intact, with Detective Sandy Whittal on his trail. It won’t be easy, and Ripley (which is a pseudonym of Naben Ruthnum) isn’t afraid to put his readers through the ringer. You’ll stay up all night with this one.

Check out an exclusive Q&A with author Nathan Ripley!