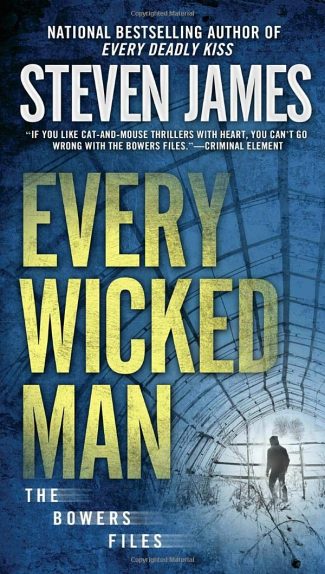 Every Wicked Man by Steven James is the 11th book in the Bowers Files, where a criminal mastermind’s chilling terrorist plot forces FBI Special Agent Patrick Bowers to the brink.

Approaching the second or third book in a trilogy or a book in an existing series has always been an act of trepidatious yearning. The cover snaps your head or the title intrigues, but you wonder: Will I be lost? Will I feel like the new kid in high school listening to the indecipherable shorthand of the popular kids thus multiplying my feelings of inadequacy and inferiority, or will I be embraced and feel immediately at home? Diving into Every Wicked Man and slipping across the first few pages was an organic experience in reading something that feels fresh and new and beautiful.

Every Wicked Man is the 11th book in the Patrick Bowers franchise, so you can maybe see why I was worried. But never did I feel lost or not part of the in-crowd. What connections there were to past experiences—which were few, and you will see the reason why in a moment—intrigued me.

Environmental criminology is the study of crime, criminality, and victimization as they relate, first, to particular places, and secondly, to the way that individuals and organizations shape their activities spatially, and in so doing are in turn influenced by place-based or spatial factors (Wikipedia).

Think nature vs nurture, or in this case, the ability for nature to nurture, which is far more fascinating. I knew right away that this was going to be a smart book.

James’s narrative style and plotting grabbed me from the beginning. The way he creates character through dialogue shows an expert sense of narrative.

“All the chatter, chatter, chatter,” he said. “The words and the spider web connections, back and forth, all the time, touching each other.  Intertwining, overlapping. Threading between things, around them. Is there a way to turn it off?”

“Tell me more about this chatter. About what it’s like.”

“I see a leaf on the ground and wonder about the tree that dropped it there, when it was planted, how long it’s growing, how many other trees its roots touch down there, deep underground. A server at a restaurant hands me a pen to sign my credit card receipt, and I think of all the other people who’ve ever held the pen—the dates they were on, the argument or lovemaking or chilled silence that might have followed later that evening after one of them signed the receipt and handed back the pen. I pass a girl on the street and see her smile after reading a text message, and I fill in what it was she might have read.”

“That simply shows a vivid imagination.”

Character through dialogue is not an easy task. Note the fear and almost desperation in the one’s voice juxtaposed by the calmness of the other? Then again, Steven James has a Master’s Degree in Storytelling and can often be found teaching his craft, so there’s a reason his writing is so accessible and so lean.

What I also enjoyed was my inability to define what this book was. Was it a police procedural? Yes. Was it a suspense novel? Yes. Was it a mystery? Yes. Was it a psychological thriller? Yes. Steven James has the ability to incorporate all of these elements into a fascinating story that literally had me swiping left on my Kindle until my hand hurt.

Special Agent Bowers first hit the page in the novel The Pawn. The rest of the books were all chess-themed, following with The Rook, The Knight, The Bishop, The Queen, and The King. James wrote Opening Moves between The Queen and The King, then climaxed the series with the apt-named Checkmate. Every Wicked Man is the third book in the prequel novels, or the time preceding the events of The Pawn, detailing Bower’s adventures in his early years. The other novels are Every Crooked Path and Every Deadly Kiss.