Review: Don’t Look for Me by Mason Cross 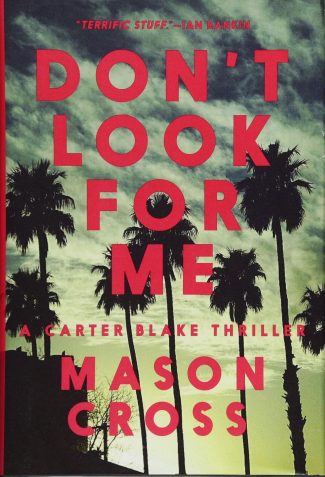 Don't Look for Me

Don’t Look for Me by Mason Cross is a nail-biting new thriller—perfect for fans of Jack Reacher, Alex Cross, and Jason Bourne—about the desperate hunt for a woman who has a secret to kill for.

If Jack Reacher fans are looking for something to fill the void, Mason Cross’s Carter Blake just might fit the bill. Our hero is really good at finding people, but he’s taking a bit of a break in Grand Isle, Louisiana.

I had planned to stay a few weeks when I had arrived in early November, but the temperate climate had been hard to resist, so I decided to stay put until the New Year. While I was still within the technical limits of that decision, it was now early June and I had yet to make a move. The problem was, the Gulf Coast just kept getting more pleasant as the year advanced. I kept expecting to get tired of waking up to blue skies and beaches, and peace and quiet, but it never happened. I read books, I went for long runs, I ate good food in a different place every night. I did everything I could to not go looking for trouble, and for the most part, I was doing a good job.

But trouble is never far away from Carter, and soon he’ll be hit with news of a blast from his very storied past.

Meanwhile, in Nevada, journalist Sarah Blackwell can’t help but be curious about her odd neighbors, Dominic and Rebecca Smith. They don’t leave the house often and seem aloof. After Sarah witnesses a loud fight between the two, Rebecca approaches her, and they begin something of a friendship, meeting at Sarah’s house frequently for coffee and conversation.

When Rebecca doesn’t come over one evening, Sarah is puzzled. The couple had left a baby shower abruptly earlier in the day, and Sarah assumed Rebecca would want to tell her all about it. So when she doesn’t appear, Sarah is puzzled.

Puzzlement turns to downright concern when she finds a typed note in their mailbox saying they had to go away for a couple of weeks and apologizing that they didn’t get a chance to say goodbye. Concern turns to downright alarm when Sarah witnesses two men enter their home a couple of days later—and one of them has a gun. The police are skeptical of her claims, but Sarah knows what she saw. Then, Sarah decides to explore the couple’s home, hoping to find a clue as to what happened. Indeed, she uncovers a journal with a clue: an email address.

It’s an email address that leads right to Carter Blake. So much for taking a break. Turns out “Rebecca Smith” is Carol Langford, an old flame of Carter’s that he hasn’t seen since 2010. Her last message to Carter was, “Don’t look for me.” It’s a startling realization, and Carter heads to Nevada to meet with Sarah and uncover the mystery behind Carol’s flight.

Unfortunately for Sarah, Carson, and Carol, a hitman named Trenton Gage is on Carol’s trail, and he never stops until he gets his target. There’s a lot at stake, and when Carol is linked to a Vegas bank heist, it adds a whole new dimension to Carter and Sarah’s investigation, leading them to the ruins of an Arizona ghost town. I love that Cross added these set pieces—it really makes for some creepy scenes.

The roof was arched, with rafters spanning the space between the two walls. There was a stage on the far side, and behind that, a spiral staircase leading up to a short platform about fifteen feet long. There was a door at the far end of the platform. The hall was mostly empty, the broken remains of wooden chairs and boxes scattered here and there.

Exploring such rickety remains aren’t without peril, as Sarah soon finds out:

The staircase creaked and the central column shook visibly as she stepped onto it. She stopped on the third step and examined the fourth. It looked almost rusted through. She stepped over it and onto the next one. She continued up the stairs. There were twenty of them, and she counted every one while holding her breath. After what seemed like an eternity, she made the platform. That, at least, felt a little more solid than the staircase.

Blake walked underneath the platform and directed the beam up through the iron grate as Sarah walked carefully along the length of the platform, stopping when she got to the door. It was chained shut and padlocked.

“I’ll come up,” Blake said as she examined it.

“Don’t bother,” she said. “Unless you have a blow torch. The padlock’s rusted shut.”

Sarah took even more care descending the staircase, feeling it tremble as she put her weight on each step. She sighed with relief when her feet were back on solid footing.

Then she heard a sudden noise from above them, and let out an involuntary scream.

A confrontation with a hitman is inevitable, but can Sarah and Carson get to Carol before he does? It’s a nail-biting cat-and-mouse chase that will leave no one unscathed. This is a wildly fun thriller. If you haven’t discovered Carter Blake yet, what are you waiting for?