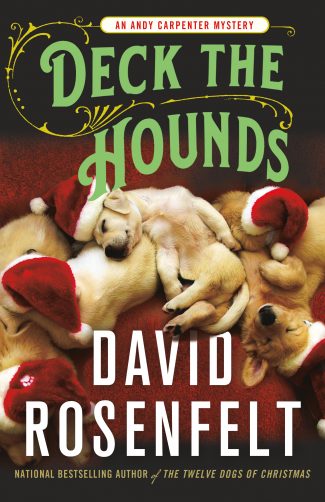 I honestly can’t even begin to tell you how much I enjoy David Rosenfelt’s Andy Carpenter novels. Reading each new book is like enjoying a delicious hot coffee drink on a chilly day, smooth and bracing, going down quickly but oh-so-satisfyingly. Deck The Hounds is no different: in this 18th installment of the series, Christmas has taken over the Carpenter household as Andy’s wife Laurie announces the beginning of the Christmas season, which, according to her, runs from the end of Thanksgiving all the way to February. Their adopted son Ricky is only too happy to throw himself into the celebrations, though Andy is far more cautious given his general suspicion of anything that requires more physical exertion than the walking of his beloved dogs, Tara and Sebastian.

Still, he’s far from being a Grinch, and when he encounters a homeless man with a dog he happily gives them money and a pet store gift card. So he’s unhappily surprised a day later to see on the news that the same homeless man, Don Carrigan, was attacked the night before. Don fought off his attacker with the help of his dog, Zoey, but after Zoey bites their assailant in the course of the fight, county law requires that Zoey be held in an animal shelter for ten days to ensure that she doesn’t have rabies. Don is understandably upset, and the Carpenter family, in the spirit of the season, is determined to help.

Unfortunately, their helping opens Don to further police scrutiny, and he’s soon arrested for the murder of a rich businessman that happened several counties over. Don has no idea who Steven McMaster is, but DNA evidence puts Don at the scene of the crime. Steven was killed with a brutal neck breaking, a move that a former Green Beret like Don has been trained to do — another piece of circumstantial evidence against him. Andy, of course, immediately offers to represent Don in court, for once willingly coming out of his “retirement” to defend the innocent.

For all Andy’s self-deprecating reluctance to get back into legal representation, he’s a really good lawyer, and reading this series gives us a fascinating look at the process of criminal defense. I particularly enjoyed this passage comparing one aspect of his job with another interest of mine:

Reading discovery for the first time reminds me of a show Laurie occasionally watches; I think it’s on the Food Network. A couple of wannabe chefs get into a cooking contest with each other, and some judges eat the food they’ve prepared at the end to determine who did a better job.

But just before the time clock starts, the chefs open a box which contains all the ingredients they will have to use to make their dishes. This is it; this is what they will be forced to work with.

Reading discovery documents reminds me of that show. I am about to learn the facts of the case as the prosecution sees it, and more important, I will find out what ingredients they will be using to make their case. I won’t get any choice; the chefs and I have to make do with what we are given.

Andy’s point-of-view chapters are interspersed with third person chapters detailing seemingly unrelated criminal activity that eventually intersect spectacularly with the denouement of the mystery. I particularly enjoyed the attempted double-cross at the end of the book, as I’d definitely thought that all the evidence pointed to one particular person as the real murderer. Mr Rosenfelt’s plots are always intelligent and twisty, and I love so much how Andy is a modern-day Perry Mason, finding the real killer while clearing his clients’ names.

Read an excerpt of Deck the Hounds!

I also love all the humor that makes up a large part of this series, most of which comes from Andy and is made at his own expense. Here, he’s asking his co-counsel for assistance in getting some evidence to a contact of his for quick DNA work:

I ask Hike to pick up the piece of the sleeve that we’ve been given, which is at the evidence room in Passaic County. I tell him to bring it to me at the state lab in Newark, where I will be kissing the ass of one Horace Persky.

Andy is a wise-ass of the nicest kind, and his commitment to innocent people and animals makes him one of the easiest lawyers to root for in modern fiction. Deck The Hounds comes at the perfect time for getting into the holiday spirit, with a smart and hugely entertaining reminder of the importance of helping those less fortunate. Much like Laurie’s prolonged celebration of Christmas, I didn’t want it to end, but am already looking forward to the next go-round!