Review: Day of the Dead by Nicci French 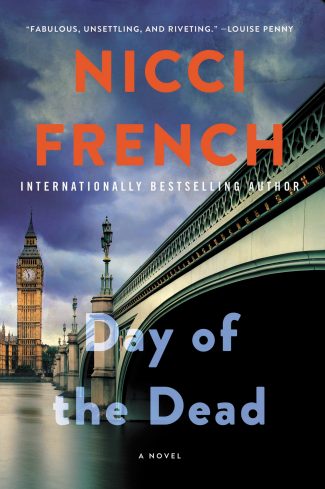 Day of the Dead

Day of the Dead by Nicci French is the final book in the Frieda Klein series—a gripping cat-and-mouse thriller that pits one of the most fascinating characters in contemporary fiction against an enemy like none other.

Frieda Klein is missing. Well, not missing but off the grid. If her friends know where she is, they aren’t telling. Not even each other. Frieda is trying to stay out of the orbit of Dan Reeve, a psychopathic killer who is obsessed with her.

Lola Hayes is also becoming obsessed with Frieda. Unable to come up with a subject for her dissertation in Criminology, she badgers her advisor into assigning her a topic. He suggests Frieda Klein, pointing her to another professor who has met Frieda.

“Frieda Klein,” he said slowly, as if savoring the sounds of the words over his tongue.

There was a pause.

“I was hoping you could tell me something about her. Steer me in the right direction”

“Are you talking about Frieda Klein?”

“I just mean that you should approach the subject of an amateur insinuating herself into police operations with a certain objectivity.”

“I thought she’d been involved in solving some cases.”

Bradshaw gave a sad smile. “The main advice I would give you is to be careful of taking Frieda Klein at her own valuation. If you do your research properly, you may well come to see Klein as someone who has left a trail of havoc being her.”

Meanwhile, the police are investigating a car accident. An out-of-control vehicle careened down a hill and into a shop, causing several injuries and one death. The driver is dead too, but police can’t tell if he was killed in the crash or had a heart attack before the car went out of control.

This event and some seemingly unrelated incidents have Frieda wondering if Reeve is back and trying to get her attention. She knows she will eventually have to face him. First, though, she has to deal with Lola.

“Stop right there.” She faced Lola. Her face was pale and her eyes glowed.

“Why are you doing this?”

“I knew you were,” said Lola, and impulsively she put her arms around the woman as they stood together on the pavement. “You poor thing. Everything you’ve been through. You must feel so sand and alone.”

But Frieda pushed Lola away. She looked hat her steadily and Lola had the strangest feeling of being looked not at but into, a gaze going right into her most secret part.”

“Do you realize what you’re doing?” said Frieda, softly. “Getting involved in my life is a dangerous thing to do.”

“It’s just for a dissertation.”

“You’ve been talking to people I know, looking for me.”

“You won’t find me again. And you must never tell anyone that you did so once.”

“You don’t need to understand. Leave me. Forget you met me. Stop trying to find out about me.”

“Shall we have coffee together first?”

The tension ramps up slowly at first—trying to figure out how all these different parts will come together, the actions of the police detectives, and what Lola’s quest will turn up—but Nicci French soon shifts into high gear. As the story progresses, the pressures of hopelessness and claustrophobia take over and ratchet up the tension to eleven.

There are a lot of characters here, but the authors provided just enough backstory on each to keep this newbie from feeling lost without having to suffer through information dump. You may or may not know that Nicci French is a pseudonym for Nicci Gerard and Sean French, wife and husband coauthors. I haven’t researched how they split the work—maybe it’s a secret. However they work, the finished product is seamless. It felt as if one very talented author wrote the whole thing. I’m sure that’s not an easy thing to do, but they make it look that way.