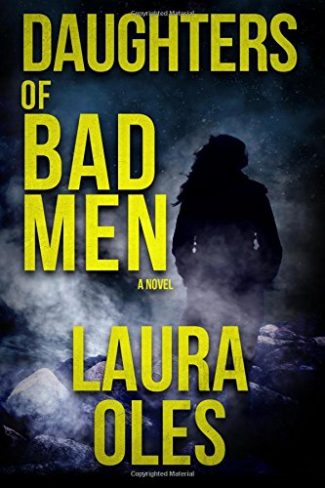 Daughters of Bad Men by Laura Oles is a debut novel that follows skip tracer Jamie Rush as she tries to escape her small-time criminal upbringing and put the skills she learned to good use.

Jamie Rush has grown up on the rough side. The child and sibling of conmen, Jamie somehow managed to fall on the right side of the law as a skip tracer, a private investigator, and a generally caring human being. She’s built her life around bringing criminals to justice—one way or another. Now, living in the small island town of Port Alene, Texas, she hunts down small-time hoods with her partner, Cookie.

Then, her brother, Brian, a man who embraced their father’s scamming ways, calls her out of the blue. It turns out his daughter, Kristen, is missing. Jamie doesn’t want to be dragged back into the family drama. But Kristen, despite her wild streak, has a good heart and, like Jamie, can’t really be blamed for the conman who raised her. So Jamie goes looking for her niece … and doesn’t like what she finds.

Daughters of Bad Men is photo-industry journalist Laura Oles’s first novel. Nominated for a 2018 Agatha Award for Best First Novel, Oles’s story takes the titular daughters of bad men and pits them against the world their fathers have created. Whether it’s Jamie fighting against cons and criminals; Erin, the daughter of a bookie who jumped into the family business with a certain hesitation; or Kristen, who gets swallowed up by her father’s misdeeds, the women in this novel have something to prove.

By most standards, the small town of Port Alene doesn’t rank as a “high crime” kind of area. Lots of tourists. Beachfront. But when you’re in the middle of the criminal activity in a town, it really doesn’t matter how the town looks from the outside. Plenty of trouble awaits you. And it looks like P.I. Jamie Rush’s niece, Kristen, has fallen into the center of some trouble. Not the least of which is Kristen’s father, Brian.

Jamie and Brian are half-siblings. They weren’t raised together and don’t get along very well. It’s been a long time since Jamie’s heard from him. Things have to be bad for him to reach out for help. Kristen has often disappeared in the past—just to get away from “the life.”

Jamie thought for a moment. “She knows how to disappear if she wants to. I’m sure you and her dear granddad taught her all the tricks of the trade. Maybe she just needs to dry out or something.”

Brian shook his head again. “I thought so too at first. But this feels different. Her friends don’t seem like they’re covering for her. They really don’t know where she is. You know what a talker she is. She hasn’t called anyone.”

“Does she have a boyfriend?”

Brian nodded. “There was this one guy she was seeing named Dylan. They worked together some.”

Jamie raised an eyebrow. “Worked together? Without you? I’m guessing that they weren’t operating a convenience store.”

“Small time stuff.” Brian rubbed his eyes, the bags underneath them a sign that sleep had not visited him recently. “Dylan’s actually a pretty enterprising young man. He’s got a network of guys faking injuries and getting pain meds. He buys the pills of them and sells them on the street. Kristen says he also has a few kids with doctor parents, so he buys script pads, uses fake IDs, and gets them filled for hydrocodone, oxy. Impressive monthly cash flow for a small-timer really.”

“What was Kristen’s role in all this?”

Brian beamed, such a proud father. “She’s a jack-of-all-trades. She got pretty good at forging scripts and built a nice clientele on the street. She could always drum up business and knew how to sell without attracting attention. That girl could show up at a high school and talk those boys into anything. Made a lot of money with her charm.”

Jamie bit her bottom lip in an effort to keep her mouth shut. The fact that his daughter was dating a drug-dealer—and that he seemed proud of that—ousted him from any father-of-the-year award.

But something isn’t adding up.

When Jamie goes looking for her niece, she finds a bunch of contradictory information. On one hand, she does indeed find a drug-dealing (yet strangely nice and considerate) boyfriend and rumors that Kristen may have been involved in a scam that went south. But she also finds Kristen’s Friend Connect page with lots of superhero and comic-book references. It also looks like Kristen was involved at the Youth Activities Center.

Then Jamie gets a break—Kristen may have been squatting in a local, abandoned beach house.

Turns out, Kristen was in over her head after all:

By free crash pad standards, this place isn’t that bad. She stopped for a moment, taking note of the stillness in the house. She wondered if Kristen was hiding somewhere in one of the back bedrooms. Maybe her niece worried an intruder had come inside.

Jamie ignored the knot in her stomach as she moved tentatively down the hall toward the first bedroom. She took a step inside and stopped cold. On the floor, Kristen lay atop a navy blanket, but clearly not at rest. Her body was twisted in an unnatural way. Her face was turned to the wall, but her right arm remained outstretched, palm open, her torso turned toward the open door.

Then Jamie noticed the needle on the floor. She rushed to look at her niece’s face.

Kristen’s eyes were open with a haunting vacancy, gray and glassy.

“No, Kristen, no…” was all she could whisper.

Now Jamie might be in over her head. Kristen’s suspicious death and some sudden activity from local criminal elements tell Jamie that something larger might be at work. And she’s accidentally found herself in the middle of things. To protect herself, her partner, and her best friend, Jamie has to use everything she’s learned from dangerous men.

Daughters of Bad Men by Laura Oles is a novel that explores the consequences of rebelling against familial expectations. In a lot of stories, it’s about teenagers rebelling against strict parents. Rarely do you find a story where the “good” child is the rebel, which makes Daughters a creative twist. It’s not a surprise to see such a unique, gritty tale on the Agatha short list.