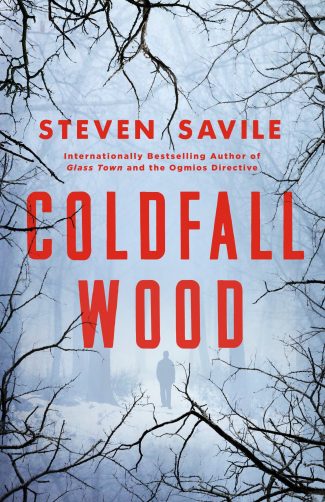 Coldfall Wood by Steven Savile is a gritty new fantasy thriller about a reluctant hero combatting a forgotten god.

Crime fiction deals with the law and the consequences of breaking them. But what happens when it’s not just the laws of a nation that are being flouted but the laws of the natural and magical worlds as well? Steven Savile examines this and more in his latest novel, Coldfall Wood, and the result is a highly satisfying literary cocktail that blends together crime fiction, supernatural horror, and fantasy.

In the opening chapters, Savile transports readers to a gritty London neighborhood that’s adjacent to the real-world Coldfall Wood and the ancient woodlands. It’s a smart opening move because it grounds the story in real-world problems and helps ease readers into the more fantastical situations that arise later. Plus, Savile has a knack for realistic, hardboiled, and violent prose, as demonstrated in the opening paragraph of the second chapter:

It started with a single shocking act of violence. It wasn’t random. It wasn’t senseless, at least not to the kid holding the knife. It was about honor. Ollie Underwood died on the pavement outside the fried chicken fast-food place on the High Street, his blood slipping down between the cracks. It looked like paint in the too-bright glow of the restaurant’s lights. “I hope she was worth it,” were the last six words he ever heard. “Always,” the last one he said. He even managed a smirk.

This opening murder escalates into a cycle of violence that claims the lives of several innocent victims and threatens to ignite a powder keg of simmering racial tensions. It also draws the attention of a police officer named Julius Gennaro and his new partner, Ellie Taylor. Unfortunately for officer Gennaro, these events are about to spiral out of control into something fantastic and sinister because of the fallout from Savile’s previous novel, Glass Town.

Although I was unaware that Coldfall Wood was a direct follow-up to Glass Town, Savile expertly weaves in the events of the previous novel, and I never felt like I had missed out. In fact, it was quite the opposite. I was able to follow along with ease and felt like I had a good prequel to tackle after reading this novel.

Gennaro is a terrific character, and it’s clear the events of Glass Town had a profound and interesting impact on him. But he’s not the only returning character—his girlfriend, a nurse named Alex Raines; Alex’s brother Josh; and a sorcerer named Cadmus Damiola return as well. Choices they made at the end of Glass Town put London in the crosshairs of an ancient, powerful, and forgotten god, and each of them is forced to confront strange, supernatural phenomenon as well as a bloodthirsty entity for which they feel responsible.

Savile is great at establishing an escalating sense of dread, making the emergence of this ancient god and his followers some of my favorite portions of Coldfall Wood. Early chapters feature quick and frightening glances of his antagonist, a horned god named Arawn, as well as some particularly chilling scenes where unfortunate souls are led into the Arawn’s dominion, Coldfall Wood, and violently transformed into his servants:

His body formed the bridge of the great beast’s snout. He wanted so desperately to scream as the Horned God clad his corpse in more and more of the forest’s debris until it was impossible to see him inside the carapace of wood as he became a great elemental beast, fashioned from the stuff of the ancient forest itself. The old wood reshaped itself, alive. It glistened with dew. It formed the curves of an enormous rib cage and the grand sweeping lines of the beast’s huge wooden skull. By root and branch it grew until it could grow no more.

Jam was in there somewhere, his mind lost to the ancient anger of the old wood.

Arawn and his followers are vengeful nature spirits. Humanity has been a lousy custodian of Earth—often corrupting and spoiling nature’s wonders in the name of greed—and a number of poignant and powerful passages give our antagonists a frighteningly arguable viewpoint. But once the Horned God and his followers emerge and begin wreaking havoc on London, the story shifts, becoming a fast-paced—almost apocalyptic—fantasy tale that incorporates a lot of the British Isle’s mythology and folklore. These sections feature mysterious islands, strange creatures, rampaging teenagers, a magic sword, and a Hail Mary-style plan to end the Horned God’s crusade against the people of London.

These moments contain a lot of fun character beats, especially for Gennaro’s partner, Ellie, who becomes embroiled in the supernatural in a very cool way that also suits her chosen profession. They also contain passages like the one below, which help ground and flesh out the ethereal elements:

The air around Damiola chilled as it filled with a weird static charge that thrilled at the promise of the Horned God’s magic. He recognized it as the precursor of real magic; his own spells had a unique signature scent that made it easy for other practitioners to recognize the caster. In his case it was cinnamon. A sweet smell. He’d met others who smelled of freshly baked bread, of vanilla, of grass, and darker fragrances, oil and petrol and smoke. But Arawn’s magic was an ancient one, its signature the heady scent of the forest itself.

Coldfall Wood is the first novel I’ve read by Steven Savile, and I can’t wait to read more. I’m going to go back and read Glass Town and count the days to his next installment.