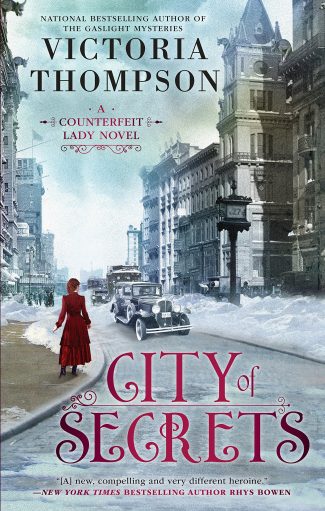 City of Secrets by Victoria Thompson is the second book in the Counterfeit Lady series starring on-the-run Elizabeth Miles.

In the author’s note at the end of this novel, Victoria Thompson hopes that the reader had as much fun reading the novel as she had writing it. I would like to state that I, for one, absolutely and uncategorically did. City of Secrets is a sheer delight of a novel, written with such verve and wit and heart that I didn’t want it to end and can’t wait to read more!

We begin with our engaging heroine, Elizabeth Miles, the Counterfeit Lady of the series title. After falling in with a group of New York City society ladies who’d gone down to Washington to agitate for women’s suffrage—and landed in jail for their troubles—Elizabeth finds herself under the wing of Mrs. Bates, a formidable society matron, and quickly falls in love with her upstanding lawyer son, Gideon. This poses a bit of a problem, as Gideon is so morally correct that he will not tell a lie, whereas Elizabeth has spent most of her life lying in her chosen profession of con artist.

While Gideon doesn’t mind her past, he does understand that life will be much easier for himself and his wife-to-be if she’s seen as a respectable member of high society. To this end, Mrs. Bates and a small coterie of friends (as well as a renowned book of etiquette written by the esteemed Mrs. Edith B Ordway) are doing their best to tutor Elizabeth in what she views as the biggest con of all:

Elizabeth was more than prepared[.] She’d spent most of the previous evening and that morning studying Mrs. Ordway’s chapters on calls and conversation. She didn’t want to break any etiquette rules that would expose her as a counterfeit lady, after all. Oddly enough, Mrs. Ordway’s rules were remarkably similar to those followed by a good con man: Don’t monopolize the conversation. Don’t argue. Don’t contradict. Don’t interrupt. Of course, Mrs. Ordway didn’t think it proper to inquire into another person’s private affairs, but how else could you find out if a mark was worth fleecing?

That said, Elizabeth never went into a con for the thrill of it. On the contrary, the main reason she had long ago begged her father to teach her the tricks of his trade was to ensure that she would be able to make her own way through life in a society that narrowly defined what women were allowed to do, even in the so-called Progressive Age. She’s honestly quite relieved to leave behind the more dangerous aspects of life as a grifter. But then, the plight of one of her new friends, Priscilla Knight, comes to her attention.

Priscilla had been married to the love of her life, DeForrest Jenks, when he died in a tragic accident outside of his club. In a haze of grief, she succumbed to the blandishments of her pastor—who believed she needed a man to look after her and her young daughters—and allowed herself to be married to a near stranger, the supposedly wealthy Endicott Knight. As if that wasn’t enough to set the gossips’ tongues wagging, Endicott himself met his end in another tragic accident nine months later.

Still reeling from all this misfortune, Priscilla is further shocked to be informed by her banker that Endicott’s death leaves her not richer but significantly poorer. It looks like Endicott has not only spent all her money but also mortgaged her house, leaving her and her girls virtually penniless and on the brink of homelessness. Priscilla knows that she’s been cheated but not necessarily by whom or how. When Mrs. Banks suggests that Elizabeth help her go through Endicott’s papers to find the truth, Priscilla gratefully agrees.

As Elizabeth investigates, she finds that Priscilla was indeed the victim of a con and that the perpetrator is still very much alive. Elizabeth is determined to recover Priscilla’s money, but she’ll need all the help she can get—whether from her society friends or her criminal family, including her father, who accuses her:

“Becoming respectable has nothing to do with it and my heart isn’t soft. Being in jail is what made me realize that life isn’t fair for other people, too, and that I can do something about it.”

“So you want to change the world?” he asked skeptically.

“I want to change the part of it I live in. That’s ambitious enough.”

Elizabeth is such a terrific character: plucky and smart, with a good-heartedness that comes from being keenly aware of the realities of life. Watching her balance her quest for justice with her on-going self-establishment as a society lady is thrilling, intelligent fun. I loved all the plot twists and turns as her plan to outwit the criminals imperils both her and her love life. It was also fascinating to see how far we’ve come as a society and, honestly, how far we still have to go. If Ms. Thompson’s other books are even half as clever and enjoyable as this one, I can’t wait to get my hands on them all!