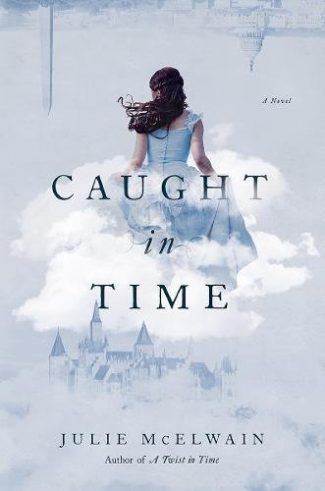 Still stranded in 1815, FBI Agent Kendra Donovan finds herself on the trail of a vicious murderer with a shocking secret in Caught in Time—Julie McElwain’s third Kendra Donovan historical mystery.

What would you do if you were unexpectedly whisked backward in time to Regency England? What if you were an FBI agent who was chasing a criminal at the time? This is exactly what happens to Kendra Donovan. With no idea how to get home, she’s stuck in the past.

Lucky for her, she meets a forward-thinking Duke who believes her story and has set her up as his ward. Kendra now looks the part of a contemporary cultured woman—even if, in her mid-20s, she’s considered a spinster. Playing the part is another thing altogether.

Jameson stepped in front of her. “Miss Donavan, you don’t want ter come any nearer. ‘Tis not for female eyes.” When Kendra simply walked around him, he puffed out his chest in indignation “Now see here, yer Grace, I ain’t gonna be responsible for any female hysterics!”

“I shall take full responsibility for my ward if she should become hysterical, rest assured,” the Duke told him, and followed Kendra to look at the corpse.

Kendra focused on the body, sprawled on the floor face up. Mr. Stone had been a big man. Fat, not muscle, strained the seams of the pantaloons, coat, waistcoat, and shirt he was wearing. His stomach plumed over his breeches. He was also a lot older than Kendra had expected him to be. Late sixties, she deduced. His face was heavy and jowly. His eyes were open and filmed over. He still had a decent head of hair, once dark, but now silver. There were no marks on his forehead, but the left side of the head was matted with blood. His cravat, shirt, and coat were soaked in blood as well. A few blowflies were already buzzing around the body, crawling across the man’s face.

“You moved the body,” she said.

Kendra and her benefactor, the Duke of Aldridge, offer their services to help with the investigation. Not wanting to offend the visiting royal, they grudgingly accept.

I wasn’t sure what to expect, having not read the first two books in the series. An FBI thriller with a female protagonist set in the 19th century?

And it is okay. More than okay. One blurb describes it as a Regency romance mixed with a thriller. There is some steamy action between Kendra and Alec, the Duke’s nephew. However, the thriller part takes center stage.

Without all the trappings of modern-day law enforcement, Kendra makes do with her keen observational skills and the help of her friends. A “muff pistol” also helps. Even if it is only accurate within fifteen feet of the target and is nothing like her official weapon. Her friends help with that as well.

Concern pulled his brows together. There were some areas that he and the American would never see eye to eye, he knew. What he viewed as protection, Kendra saw as a prison. But whether she liked it or not, he felt the need to place himself as a buffer between her and the nasty slings and arrows of the Beau Monde. But how could he protect her from his own nephew?

He wasn’t a fool. He bloody well knew that Alec wasn’t only teaching Kendra to shoot when they disappeared into the woods. He’d been young once. He remembered what it was like to be in love. He recalled those heady days before he’d made Arabella his wife and gave a wistful sigh. It was embarrassing, really. Watching Kendra and Alec together, he’d begun to feel like one of those detestable matchmaking mamas who plagued the Season, desperate to marry their whey-faced daughters off to the first eligible bachelor that gave them attention.

Fiend seize it. He might not be Kendra’s father, but he was her guardian. And by God, he refused to stand by and let his own nephew compromise her. She wasn’t a light-skirt to be trifled with. It was within his rights to demand that Alec marry her.

Except—and this was truly the crux of the matter—he suspected that it wasn’t Alec who was averse to marriage.

The author does a great job of addressing the class system of the time without lecturing. It is portrayed as a fact of life—as is the different standards the society imposes on women. After reading about the treatment of one woman in particular and how the death of a servant is treated as inconsequential, you can draw your own comparisons to attitudes today.

Kendra walks a fine line between being herself and not compromising her position or that of Aldridge and Alec. She’s also wary of saying too much about the future to the Duke lest she should change it.

I’ve read my fair share of Regency romances, but I never fantasized about living in that time. Even if I could be part of the gentry, I don’t think I could deal with chamber pots, the general unsanitary conditions, or arranged marriages. I do enjoy needlework and playing piano, but I like my modern conveniences too much to give them up.

That doesn’t mean it isn’t fun to read about it. And Caught in Time is a very fun read.