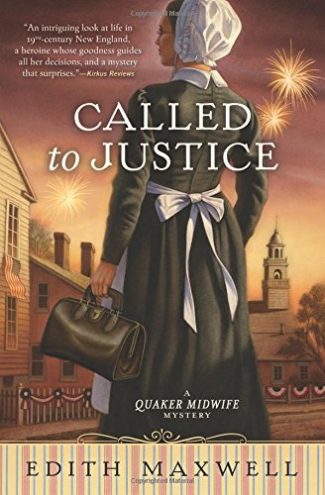 Called to Justice by Edith Maxwell is the second book in the Quaker Midwife Mystery series.

Meet Rose Carroll, the 19th-century Quaker midwife who is one of my favorite creations in all of recent fiction. Though still quite young, she is the only practicing midwife in the Massachusetts town of Amesbury, home of the renowned (and actual) Quaker poet, John Greenleaf Whittier, who in these novels is also Rose’s friend and mentor.

As Called to Justice begins, Amesbury is ready to celebrate Independence Day. Rose is enjoying a day out when she’s taken aside by Hannah Breed, a fellow Quaker and friend of her younger sister, Faith. Hannah is 17 years old and works in the mill, living in a boarding house for single women. She is also, as she confides in Rose, pregnant and scared. Rose inquires first as to whether Hannah cannot wed the father quickly, but Hannah is adamantly against it. Hannah also believes that the father will not provide for her, and with her family far away, she has no one to support her in her pregnancy. Rose has experience helping single mothers and promises to assist Hannah in any way she can since she knows it will be a hard road for the younger woman:

Though I knew my heart couldn’t be as heavy as hers, the thought of finding a way for her to bear her child in dignity was ponderous enough to cloud this glorious day. At times like this my twenty-six years felt like forty or more. My calling as midwife included acting the role of counselor almost as often as being the protector of a mother’s health and that of her baby.

Rose’s refusal to sit in judgment on Hannah is due in large part to their shared faith, and it is only one of the many reasons she’s such an excellent midwife. But before she can have much chance to help Hannah, the younger woman is shot to death in the middle of the fireworks display later that evening. Though Rose and her doctor beau, David Dodge, rush to help Hannah, there is no saving her or the fetus.

At first, no one claims to have seen anything. But then, Akwasi Ayensu—another Quaker and one of the few African-Americans in Amesbury—is accused of Hannah’s murder in what is clearly a racially motivated smear. If Rose didn’t have enough reason to investigate the murder before, her conscience certainly won’t let it go now. In partnership with Police Detective Kevin Donovan, she sets out to find the real killer, even if the effort will put her in a murderer’s crosshairs.

Rose’s kindness and capability make her one of the most compelling historical sleuths I’ve ever had the pleasure of reading. Another of the delights of the Quaker Midwife series is how seamlessly Edith Maxwell blends fact and fiction when it comes to recreating the era in which Rose lives. The period detail is exquisite, as are the descriptions of Rose’s religious practices, which make up an important part of her life. Most people know that Quakers are also known as The Society of Friends, but Ms. Maxwell goes beyond common knowledge to describe their practices:

I joined other Friends moving into one of the two worship rooms separated today by only a waist-high wall. Most First Days it was thus, but when we held our monthly business meetings, several men would ascend into the attic and use the giant pulley system to lower the dividing wall until it met the bottom section. The women held a business meeting separately from the men, which let us of the female persuasion control our own matters without the interference of males. I’d always found it odd that our belief in equality should lead to this separation, but it did result in giving women the confidence to speak up and come to a Divinely led sense of the meeting that spilled over into their daily lives.

Aside from mixing spiritual reflection with historical detail, Called to Justice gives us a fully realized heroine who tries to balance her work with her faith and her growing romance with the non-Quaker Dr. Dodge. Ms. Maxwell gives equal time to all these aspects of Rose, resulting in a book that is terrific while also not being for the squeamish—if you don’t want to read about the blood and trauma (and in one instance the result of a sexually transmitted infection) attendant upon childbirth, then this is not the series for you. Which would be a shame because, in addition to being an unflinching look at midwifery, it’s also a compassionate study of why people commit crimes (though I admit to being more #TeamGenevieve when it came to discussing the murderer). I’m glad that the Quaker Midwife series is gaining the attention it deserves with this Agatha nomination, and I’m looking forward to seeing whether it pulls off a deserving win.