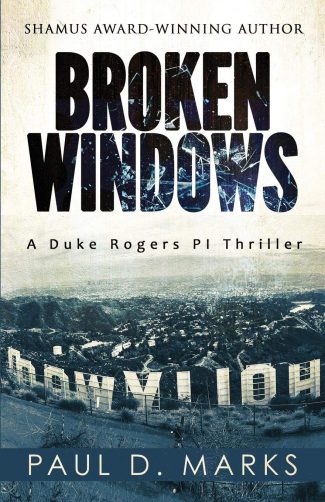 Broken Windows by Paul D. Marks is the second book in the Duke Rogers PI series.

If you enjoy old-school PI tales, you’ll love getting to know L.A. PI (and former Navy SEAL) Duke Rogers. Duke is still reeling from the events of White Heat—the first (and Shamus Award-winning) thriller to star the dogged PI—a case that involved the death of actress Teddie Matson. He feels personally responsible for her untimely passing, even if he didn’t kill her himself.

Marks expertly drops readers (returning and new) into Duke’s world—1994 Los Angeles—from the start, and the prologue is a doozy. In it, a young woman climbs to the top of the Hollywood sign and jumps off. The scene isn’t exploitative, but it is realistic and heart-wrenching in its realism. What would make this woman do this? What could have made her lose all hope? After all, she came to L.A. to be a star.

When Duke sees the news of her death, he can’t help but think of Teddie Matson, and it pierces his heart. But right now, he’s got other concerns. Luckily, money isn’t really one of them, since he’s had a steady stream of work since the high-profile Matson case. He’s also ready for a new dog. Baron was killed two years ago, and Duke is ready for a new companion. Luckily, his friend Jack shows up with a mutt named Molly that needs a new home.

I opened the door to see a desert camouflage Humvee there. What the hell?

The driver’s door opened. I had my finger on the Firestar’s trigger guard. Then Jack appeared standing above the car’s roof. His ever-present wraparound shades hid his sniper’s eyes and thousand-yard stare. He should never have left the service. He was a politically incorrect man in a politically correct time. And while he didn’t always think or say the right thing, he mostly did it. He knew he was tough but he took no false pride in it.

We were opposites in many ways. He was six-two, built like the Rock of Gibraltar. I was five-seven, but tight and stocky like a mortar round. He wore his hair in a brush cut. Mine looked like I’d just gotten out of bed, no matter what I did to it. He was my friend. I could count on him, without ever having to think about it. How many people could you say that about?

Opposites is putting it lightly, but somehow, the friendship works—even though readers may find themselves wincing at some of Jack’s comments.

So, Duke is feeling about as good as he can when he takes Molly out for a walk and encounters Marisol, a young woman who works as a live-in housekeeper for an older couple nearby. They strike up a friendly conversation, and a few days later, he comes upon a visibly upset Marisol on the Santa Monica Pier where she tells him that her brother Carlos was found with his neck broken. The police say it was an accident, but she doesn’t think so. She suspects, as does Duke, that the police might be putting it on the backburner because Marisol and her brother are in the country illegally.

Keep in mind that California in 1994 was on the cusp of voting on Proposition 187, which proposed a state-run citizenship screening system and sought to keep illegal aliens from using state resources, such as non-emergency healthcare and public schools. So tensions are high, and resources are stretched thin as a result.

Eventually, Duke decides to take on her case pro-bono, but it won’t be easy. Like I said, racial tensions are high, so questioning the local immigrant community will be difficult.

Duke narrates in his wry, melancholic voice, but a side narrative about a down-on-his-luck ex-lawyer who gets tangled up in something very, very bad adds some flavor.

The stakes get high, and the body count gets higher, but Duke is a dogged gumshoe. And with the help of the stalwart Jack (and a few police contacts) and, of course, Molly, what could possibly go wrong? Paul D. Marks has screenwriting chops—Duke and company practically beg for their own TV show.

Although it’s set in 1994, it’s eerie how timely this story is. There’s an undeniable feeling of unease that threads through the narrative, which virtually oozes with the grit, glitz, and attitude of L.A. in the ‘90s. I’m an ecstatic new fan of Duke’s.