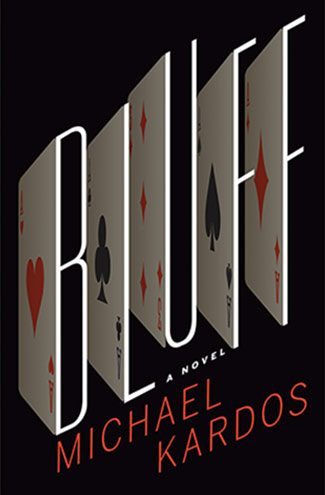 Bluff by Michael Kardos is a twisty and masterfully plotted tale about the lure of the con and one woman’s fight to keep herself clean and stick to her magician’s code.

It started with the most basic of requests: Pick a card.

Don’t we all love a con artist? There’s something so satisfying about putting one over on the suckers, so long as the sucker isn’t you.

Natalie Webb, the central character in Michael Kardos’s wonderful new novel, Bluff, knows a thing or two about putting one over on people. She was once the rising star in close-up magic, and now, even after the bloom has fallen off the rose, she is still one of the best card manipulators around.

She’s also broke. And when her frustration at her lagging reputation in the magic community and a particularly bad show boils over, she finds herself on the wrong side of a lawsuit from a well-placed card to the eyeball of a client.

She does write for a magic magazine, and when she sells a pitch to write about a card cheat, she finds herself closer to that world than she’s ever been.

“That’s what we do. And don’t call me a cheat or a cardsharp. The cards are the medium, not the method. The method is the con. Do you follow?”

I liked that phrase. The medium, not the method. I wouldn’t dare pull my notebook out of my purse, but I would commit that to memory.

But when Natalie sees someone even better at handling cards than she is, the curiosity is too much, and she sinks deeper into a quicksand she finds she can’t get out of.

Kardos does a brilliant job of making Natalie a character to root for. Her backstory is doled out in strategically placed scenes, and her desperation feels real. Plus, she’s driven as much by her lifelong curiosity of magic as her finical woes (plus a little of that backstory as well).

She wants to know the sly card tricks the con artist uses, and it’s that curiosity that makes Natalie vulnerable.

“You might not call yourself a magician,” I said, “but I saw you perform last night. No way did you pick up everything on your own. You had teachers. People showed you what they do because you needed to know. Please. Ellen. I need to know.”

The trade-off, of course, is for the con to gain another player in Natalie. And though she struggles with the decision…

A cut of whatever she was planning would go a long way right now. Of course I thought that. Of course I was tempted. But to do it would be to cross over, that was how I saw it. I’d be betraying my art and my livelihood.

…of course, she is lured into temptation.

Bluff has a magician’s touch with the storytelling, concealing just enough when necessary, revealing its hand only when it makes the most impact and wows the audience.

To give away much more would be to reveal too much of the trick, but perhaps the best sleight of hand this novel accomplishes is avoiding the well-worn con tropes. This isn’t a knock-off David Mamet story. This isn’t a heist-gone-wrong tale. This is all Natalie’s story, and like the best misdirects, you never see the next twist coming.

Kardos has had two other highly regarded novels (The Three-Day Affair and Before He Finds Her), but I think Bluff will be a novel to really break out for him. It certainly shows an author in full command. You can tell it has been meticulously researched, giving just enough lingo and insight into the world of both magic and high-stakes poker to make it authentic but not so much to turn off novices to the game or to magic.

Natalie’s battle with her own conscience is the real suspense in the novel, and we’re waiting for her to crack the same way we wait to see the final card revealed in a game of Texas Hold ‘Em.

Can a good and decent person go in on a con if it’s for the right reasons? Or is she bluffing?

“You know, it’s a shame,” Brock said, “a woman with your talents stuck performing for people like us.”

“Maybe that’s your problem,” he said.