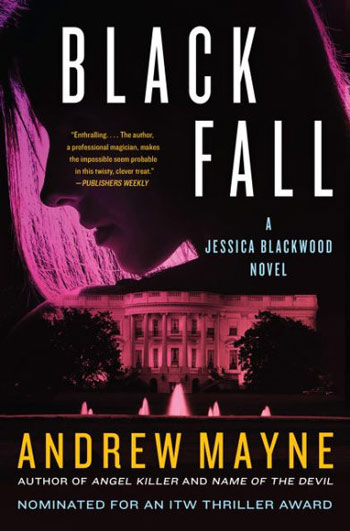 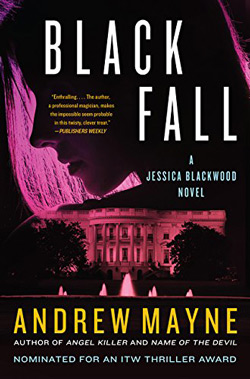 In Black Fall by Andrew Mayne, magician-turned-FBI agent Jessica Blackwood investigates a series of seemingly unrelated—but equally bizarre and sinister—crimes that lead her to the Colorado desert and a town that has, simply, disappeared.

A long pause. “Moffat?” There was no trace of surprise in his voice.

“I got a man with a produce truck in front of me asking the same thing. … I haven’t heard of any recent tornado reports. I better call the sheriff. Any idea how many people live out there?”

“Fifty-eight,” she replied, without missing a beat. Olivia swept her hand across the metal sign at her feet. It said:

The sun was setting and the shadows were growing longer. She noticed bits of charred, broken boards poking out of the dirt. A cracked cinder block stuck out of the ground like a giant chipped tooth.

She was taken back to the stories in high school history class about ancient cities buried under the dirt. One day, the people just covered everything and left. Nobody knew why.

Either something took these people and their town, or they went willingly, erasing every trace of their existence.

She wasn’t sure which scenario scared her more.

Jessica Blackwood is no stranger to astounding tricks. She comes from a family of professional magicians and, in her youth, was known to dazzle audiences with her own conjuring and sleight of hand. But now that she’s an FBI agent, she wants to put all of that behind her and focus on catching the really bad people in the real world.

Unfortunately, Jessica keeps finding herself caught up in mad, almost magical cases. This time, she’s facing off against a murderous cult known as the Red Chain—ecoterrorists orchestrating global events that threaten to tear apart entire governments.

What starts with an entire town disappearing quickly escalates into assassination attempts, riots, and wide-scale power outages. Peter Devon, a long-dead physicist, predicts each catastrophe through videos posted online. The White House is under siege. Anyone collecting paychecks from the government has a target on their back—but the biggest bullseye is on Jessica’s.

Why is the Red Chain so determined to kill her? Is the mysterious Citizens Communication Agency a cover for a black ops division—or something even more sinister? What exactly is the Black Fall Dr. Devon prophesizes?

“If you look at the timeline of history, I’m talking about all the way to life starting on earth, you see a series of rises and falls. Life builds up, then it collapses. Sometimes externally, other times internally. With human civilization, the greater the rise, the bigger the fall. We had a good run from the Greeks to the Romans, but then after the fall of the Roman Empire we had a thousand years of the Dark Ages. The Renaissance brought about the collapse of civilization in the Americas. Now, here we are at the highest point of history thus far, and inevitably we’re going to have the biggest collapse. A dark age unlike any other. The Black Fall…”

Black Fall is a wild ride from the first chapter to the last, with only the briefest of pauses for breath and regrouping before Jessica and Co. are thrown through another twist. Andrew Mayne does a masterful job of setting things up only to knock them down in a spectacular fashion, and the shortness of the chapters only adds to the breakneck pace.

As a professional magician himself, Mayne also does a phenomenal job of peppering in anecdotes about Jessica’s family and childhood, adding just enough background spice to this fantastical character. It’s great fun watching Jessica untangle the knots woven by crazy cultists as deftly as she can trick a coworker or pick a lock.

The story itself is equal parts Manson family and hacker thriller, with conspiracies and personal vendettas thrown into the mix. The deeper Jessica digs, the more convoluted it all becomes—until you’re wondering just how all of this can be connected. Luckily, Mayne is as capable a writer as he is a magician, and he pulls it all together by the epilogue.

But for all of the tricky plotting, Jessica herself remains the star of the show. Often times, stories written by men and narrated by female protagonists feel off, as the heroine becomes more of a male fantasy than a three-dimensional character. Not so here: Mayne has crafted a believably strong, complex lead in Jessica.

She’s allowed to be emotional and strong, tender and violent, capable and yet quick to ask for help when she knows she’s out of her depth—unlike many other “strong” heroines who are forced to sacrifice their femininity and be lone wolves to prove their badassery. While she’s no nun, she’s also never turned into a sex object. And she’s also fully aware of the double standards and obstacles she faces as a woman in a male-dominated world:

…Every now and then I run into one of the two types who can only acknowledge my achievements through gritted teeth: female agents who feel this is some kind of competition, and male agents who think my success is a threat to their masculinity. They’d never call themselves chauvinists—some will even actively claim to promote gender equality—but when they come across a woman who may actually be better at their job than they are, they can’t handle it. They look for a catch, any excuse to explain why someone they feel is inferior has outshone them. Maybe it’s preferential treatment; perhaps its luck.

I’d love for Evans to tell me how preferential treatment helped me survive when a renegade Mexican militia was trying to gun me down in a grocery store, or when I was drugged and nearly shoved out of an airplane.

Last I checked, bullets and gravity are gender neutral.

Black Fall is a jam-packed adventure with dangerous moments that feel all too real and present in the current political climate. And even as the apocalypse seems imminent, Jessica never hesitates to push on and reveal the so-called wizard behind the curtain…

Given her impressive track record so far, it’ll be interesting to see how seemingly impossible her next challenge will be. Here’s hoping Mayne has several more cards tucked under his sleeve with her name on them.