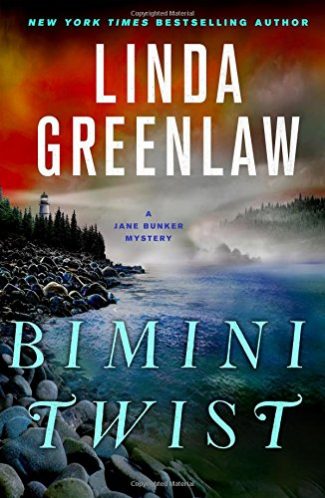 Bimini Twist by Linda Greenlaw is the fourth book in the Jane Bunker Mystery series, another thrilling, small-town mystery set in Down East Maine.

Linda Greenlaw’s Bimini Twist is a perfect summer read. If you like the water, boats, and Maine—or have always wanted to visit—Greenlaw’s Jane Bunker series is an exciting way to experience it via armchair travel.

The action of Bimini Twist picks up just a few months after the end of Jane Bunker’s last adventure in Shiver Hitch. Jane’s younger brother—who is on the spectrum and not able to live on his own—has moved from Miami to live with his sister after losing his housing situation in Florida. They live in the fictional town of Green Haven, which is near the real-life tourist mecca of Bar Harbor. The elderly couple who are Jane’s landlords have become like family to her and welcome her brother into their home and lives. The couple runs a tourist shop called The Lobster Trappe, which sells every lobster-themed souvenir imaginable.

The big news in the small town where everyone knows everyone else’s business is that Jane has been invited to the annual Summer Solstice Soirée, hosted by one of the area’s most prominent families. Everyone is atwitter that she’s been invited. Everyone except Jane. Part of the comic relief of the story comes from well-meaning friends pressuring Jane to think about what she’s going to wear to the party. Deloris, the sheriff department’s dispatcher and cyber guru, says of Jane’s wardrobe, “You dress like a librarian. But drab. Like a prison librarian. But dated. Like an out-of-style, prison librarian.” Ouch.

Jane wears two hats. She’s a part-time deputy and a part-time insurance investigator. She spent most of her adult life in law enforcement working as a decorated detective fighting the war on drugs in Dade County, Florida, before making the move to Maine. She is no country bumpkin.

The Sheriff, Jane’s boss, orders her to attend the soirée and back off on her drug-busting efforts. The Sheriff is a friendly man, slightly lazy, and well-liked by the county he serves, in part, because he focuses on keeping the peace rather than fighting crime. Jane has been upsetting the balance by waging a one-woman war on drugs. The Sheriff orders her to stand down for the summer. In a seaside tourist mecca like Bar Harbor, there’s already tension between the permanent locals, the seasonal residents, and the seasonal workers brought in by local businesses. Adding news that highlights the local drug problems could hurt the economy.

She’s ordered to check out a missing person report. Anika’s roommate, the 19-year-old seasonal worker from Romania, Bianca Chiriac, has not come home, and she is worried about her responsible friend. The night before, Bianca went out to meet a friend who worked on one of the large cruise ships that was leaving port the next day. No one else seems to be concerned about the missing teenager. She’s probably hungover and sleeping it off somewhere is the prevailing attitude. At first, Jane doesn’t seem to think much of the situation either—until she finds out a teen went missing last year too. And then, a cadet from a local maritime academy is also reported missing. Are the two teens shacked up somewhere?

During the initial phase of her investigation, Jane talks with a handsome boat captain named Pete, who becomes a bit of a potential love interest. The two respond to a mayday call together and witness a boat run down and sink another boat. The captain of the boat that sinks survives the ordeal but then dies the next day. Was it a case of competition between fishermen, which is notorious in those waters? Why are all the men involved lying about what happened? Why is handsome Pete always popping up during Jane’s investigation?

Bimini Twist requires some suspension of disbelief here and there (to give a specific would be a spoiler), but overall, it’s a fun read—especially for those who like maritime action and a coastal setting. Greenlaw packs in a lot of “Down East” flavor and gives an idea of what it takes to make a seasonal community go round—from taxi drivers to foreign college students working seasonal jobs to the local fisherman and business owners who provide for the tourists, not to mention the huge cruise ships flying under international flags that come and go and the Coast Guard that is always ready to respond to pan-pans or mayday calls. Greenlaw’s experience as a boat captain and her love of Maine breathe life into the down-to-earth character of Jane Bunker and add realism to her adventures, making Bimini Twist a pleasure to read.

Read an excerpt from Bimini Twist!