Review: Big Woods by May Cobb 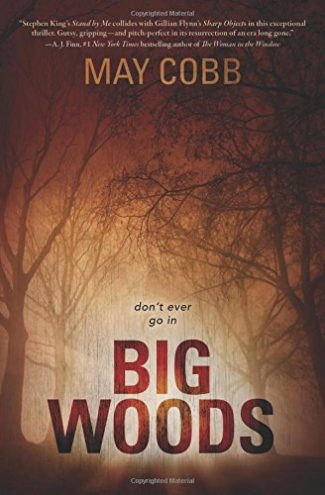 Delving into the paranoia surrounding satanic cults in the 1980s, Big Woods by May Cobb is an emotionally wrought, propulsive thriller about the enormity of grief, the magical bond between sisters, and a small town’s dark secrets.

A missing-person story, particularly when it’s an innocent child, is a reader’s worst nightmare. How can a child vanish while walking to the school bus?

It’s 1989 in the sleepy town of Longview, Texas, when ten-year-old Lucy disappears. Her parents, the police, and the community all brace for the worst, assuming her body will soon be found in Big Woods. Just like the other unsolved kidnappings.

As this isn’t the first inexplicably missing child, when she isn’t found in the first few weeks, the townspeople and even Lucy’s parents shift from active, frantic searching to numb, resigned acceptance. Lucy’s disappearance recalls the words of English philosopher Sir Francis Bacon, still relevant hundreds of years later, “He that hath wife and children hath given hostages to fortune.” Leah, Lucy’s 14-year-old sister, doesn’t subscribe to this notion. From Leah’s perspective, being a hostage is better than being dead. The sisters have an unusually close relationship, possibly because they share a birthday.

One more person “knows” that Lucy might still be alive, albeit in deadly peril. Sylvia wakes up one October morning flooded with anxiety.

Who will save the children? That’s the question I wake up with this morning, the thought that comes barging in without invitation and stays parked there, like the neighbor’s fat cat I can’t seem to shoo away from my garden. I’ll be seventy-five this month, old enough to leave so many thoughts behind, but this one curls its way around the edges of my mind like the ribbons of cream in my afternoon cup of early grey.

May Cobb introduces Sylvia’s story circuitously, slowly filling in a picture of a solitary widow, consumed with secrets. Sylvia is estranged from the townsfolk of Longview—why is that? Why does she shop for groceries “in the next town over”? While grocery shopping, Sylvia sees a new “bone-white, crisp” missing-children poster:

Lucy Spencer. Blonde Hair. Age 10. Missing since September 29th, 1989. It was then I knew there was no turning back. I had to find a way to tell someone who would listen. The children wouldn’t be safe until they stopped them. Until they stopped him.

Leah Spencer and her parents are visited by the sheriff a month after Lucy’s disappearance. He tells the family to “start preparing for the worst” and that “none of the other children who’d been taken had been found alive.” Leah, unlike her family, is still hopeful.

And I might’ve started to believe she was gone from us forever, too, if it hadn’t been for the dreams.

The first time Lucy broke through—which is how I had begun to think of it—it wasn’t even nighttime. It was in the middle of a hot, lazy afternoon nap.

Leah hears her sister shouting for her from their treehouse in the backyard. She tears outside and calls out again and again but only “the sounds of crickets chirping” answer. Perhaps dreams of a missing loved one, be they ever so vivid, are not proof of life. Is it only a sister’s unyielding love that propels Leah’s fierce determination not to give up? But one night, the cursor on the Commodore in the study moves.

I grab the keyboard and start typing: Lucy! Is that you? My heart thrums in my chest. The cursor blinks.

Y E S. The cursor types back. I can tell that it’s Lucy, that she’s typing with just her pointer finger, the only way she knows how.

Leah quickly asks Lucy where she is. For a long time “the cursor just keeps blinking, blinking at me, a teasing, winking eye.” At last, the cursor moves: “UNDERGROUND. BY THE WOODS.” Leah knows all about the Big Woods.

At slumber parties, kids would tell ghost stories about it, and even before the kidnappings there had always been spooky tales about cults and devil worshipping out there.

May Cobb’s descriptions of the Big Woods are chillingly detailed. Once Leah receives Lucy’s message, she tries enlisting her parents’ help in looking for Lucy again—but they’ve moved on. They think she’s fantasizing. It takes true grit for Leah to strike out on her own. Armed with her father’s Swiss Army Knife and a bag of Fritos, she takes her dad’s car.

The sun is bright and the sky is open with no clouds, but once I turn down Seven Pines, the road becomes even narrower and the tall trees cast shadows over the road so that it suddenly seems like dusk in the middle of the day. I have to blink a few times to clear my eyes of the sun spots.

Sylvia, the widow who is shunned by the town, and Leah, the determined loving sister, have something in common: they will not allow themselves to be deterred from searching out and facing the truth. Sylvia goes to Lucy’s mother and says, “I believe these men are still active and …” But she’s cut off before she can finish her story. You can hear the sincerity in a grieving mother’s plea, “I’m trying to hold onto what little peace in life I’ve found and I’m afraid I’m going to have to ask you to leave.” But peace, in a town roiling with long-hidden secrets, is no panacea. Readers will be grabbed by Big Woods and sucked into the mysterious story. Hold on tight—it’s worth it.