Review: All the Beautiful Lies by Peter Swanson 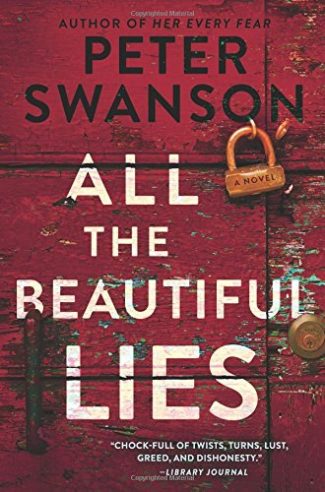 All the Beautiful Lies

All the Beautiful Lies by Peter Swanson is a diabolically clever tale of obsession, revenge, and cold-blooded murder—a sly and brilliant guessing game of a novel in the vein of Ruth Ware, Paula Hawkins, and Patricia Highsmith.

When a young boy hears of his father’s untimely death and heads back to Maine, it is seemingly innocent—a horrible accident could be the only plausible cause. However, even the opening of All the Beautiful Lies Part 1, titled “Grey Lady,” leads the reader to believe that there is something more to this.

Referencing the Grey Lady—most notably known as the nickname for Nantucket, originating from how the island appears in the ocean when blanketed in fog—is also a means of showing the reader that there is a figurative fog shrouding this death—something amiss. It is then, with this journey back to his home at the Grey Lady house in Maine, that Harry begins the search for truth in finding out what happened to his father, while Alice, his step-mother, reflects on the past that brought her to that very moment.

What this book does well is envelop Harry in the life of his father, a man who made a living from collecting mystery novels and who had now become the victim in a crime very similar to the ones written in the books he treasured.

Later that same night, Alice in bed, Harry had started the book while his father finished reading the latest Ruth Rendell.

“Why do you think you like mysteries so much?” Harry asked.

“I’m deeply skeptical of any book that doesn’t begin with a corpse.”

I loved this passage as both a nod to the beginning of the novel and a subtle confirmation that there was foul play involved in whatever happened that day on Kennewick Beach. It also plays into the transition you see within Harry as he goes from taking a passive role in his father’s life to assuming the lead in finding out what truly happened to him.

While Harry is evolving as a character, Alice unveils her ability to devolve completely. You begin to see how this woman—described as beautiful, calm and quiet—has a dark and calculating side. She becomes an unreliable narrator, with her memories often betraying reality, shapeshifting to fit her ideal situation. Examples of this are continually seen throughout the novel as she reacts to the deaths that surround her.

Why had he been so concerned about the policeman’s visit? She hadn’t been bothered by it. They were just trying to decide if it had been a suicide or an accidental death. And it was going to be easy to confirm. Gina was unhappy and on drugs. Why else would she swim out into the cold ocean water? It was so sad, really, when she thought about it. All that youth being swallowed up by all that water. Poor Gina so alone in those final moments.

Alice detaches herself in this way from a situation she was very much involved in. This leads the reader to wonder how entangled she was in the death of Harry’s father and what it is she is trying to hide. We see this detachment again in the novel when she is reflecting on her own mother’s death:

She tried to sleep, but she kept thinking about what Jake had said. Why had he brought up her mother? She’d found her mother dead on the sofa, something she’d have to live with forever. And now she’d lost her best friend. She hadn’t been able to save her, and Jake was making it sound like she was somehow to blame.

All of this culminates in an ending that takes the reader full circle—tying together Harry’s present and Alice’s past. The combination of amateur sleuthing, crime, paranoia, and broken psyches makes for a compelling read that is different from many thrillers currently on the market. Overall, Peter Swanson has written a captivating novel that keeps the reader enthralled from the onset until the final pages.