Review: Bad Time to Be in It by David Burnsworth 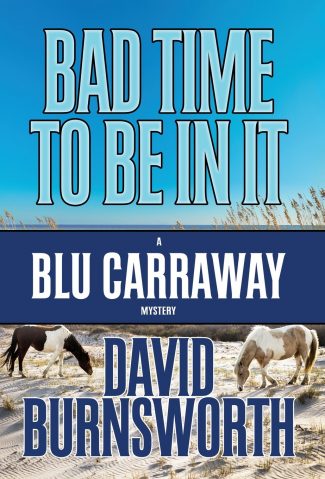 Bad Time to Be in It

Bad Time to Be in It by David Burnsworth is the second book in the Blu Carraway Mystery series.

David Burnsworth’s second Blu Carraway Mystery opens in Belize City on a blazing hot afternoon. A “woman with the family name of Kincaid” and her two friends are being stalked through a crowded market by Paco and his two partners, Peter and Lin. The women make an easy target, thinks Paco, particularly since “the stupid chicas had only one guard with them.”

God, the women were beautiful. Suntanned white girls in their early twenties. Perfect teeth. Curled, long hair. Linen blouses, short shorts, and sandals. After he shot their protector, his dreams ended with tying each of them to a bed, the fear in their eyes giving him immense pleasure.

And today was the day his dream would come true.

The tableau of predator and prey is a chilling one. The women are sitting ducks. Imperceptibly, the plan goes awry. No Lin, no Peter, and no hapless bodyguard. But Paco has orders to get the Kincaid woman: “Paco knew he could handle her by himself, even if the other two females had to die to make things easier.” Cue up a classic noir twist, delivered in deadpan prose. Paco has company:

He turned back and looked straight down the barrel of a revolver.

His eyes would not—could not—keep from staring at the black hole in front of him that brought death. Where in the hell did this come from?

No one expects the Spanish Inquisition. The hallmark of a successful Blu Carraway operation is satisfaction guaranteed. Low key, no publicity, and do whatever it takes to not only rescue the client but find out who is behind the perfidy. Unfortunately, Paco dies before he gives up his boss. Still, not a bad operation for Blu Carraway Investigations.

Blu Carraway, flush with cash and back in business, never had it so good. Or so he thought. The reality is his love life is in shambles, his business partner is spending too much time with women half his age and not enough time on the job, and someone close goes missing.

The contradictory phrase that opens Charles Dickens’s A Tale of Two Cities comes to mind: “It was the best of times, it was the worst of times.” Blu Carraway Investigations is based in Charleston, SC, not Paris during the French Revolution, so how does a historical novel relate to a Southern detective agency? The common thread is history; those who do not understand their past are doomed to repeat it.

Mick Crome, Blu’s business partner, has an off-and-on relationship with Maureen, a bartender in Myrtle Beach. Mick is pushing back pints at the Pirate’s Cove bar because Maureen is “pissed off at him” when he picks up a voicemail from an unknown number.

It sounded like Maureen. “Mick? I’m in trouble. Please help—”

A man’s voice cut her off. “Listen Crome, it’s payback time. You took from me so I’m taking from you. I’ll be in touch.”

His phone showed a text message. He tapped to open it up and stared at a picture of a scared Maureen with a gun to her head.

What does “payback time” mean? It could be anyone: “Blu and Crome both knew they had made many enemies over the years.” The story veers back in time to Charleston in 2000. We’re smack dab in a complicated case, the tension leavened by Blu and Crome’s trademark banter. The two men stand out in a sea of tourists.

Blu liked black—black t-shirt, black jeans, and black Doc Martens shoes. Tourists viewed them as oddities. Anyone on the job, living on the fringes of society, or previously incarcerated would recognize them as kindred spirits. Or enemies. Such was life in the gray area.

Perhaps gray isn’t the right shade. Life is black and white for the partners, particularly given the circumstances. “Revenge is a dish best served cold.” No one knows that better than Blu—if only there weren’t so many folks out there who would gladly take him down. It really is a Bad Time to Be in It, but the smart money’s on Blu Carraway Investigations to rescue the girlfriend and uncover the enemy. It won’t come without pain though, as Blu instinctively knows. Blu’s checkered past has brought him to this place, echoing Cormac McCarthy’s searing phrase from All the Pretty Horses, “Scars have the strange power to remind us that our past is real.”