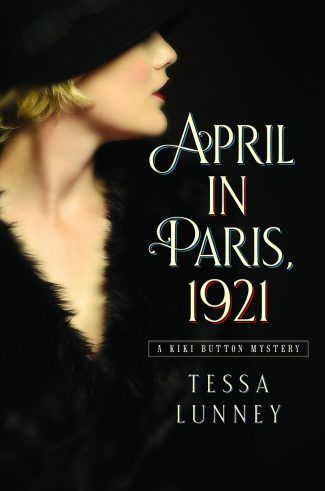 April in Paris, 1921 by Tessa Lunney is the first book in a new series featuring Kiki Button―war veteran, party girl, detective, and spy―who finds that she can’t outrun her past exploits, even in the glittering world of Jazz Age Paris.

Tessa Lunney’s April in Paris, 1921 is one of those rare debuts that absolutely wowed me. If Paris in the bohemian, post-war days of 1921 is your thing, you’ll find a lot to love, but the real treat lies with the delightful Katherine “Kiki” Button. Kiki is an Australian ex-army nurse who is looking to lose herself in the Paris party life. It doesn’t hurt that her good friend Bertie Browne is the copy editor at the Star and is willing to hire Kiki to write a gossip column—which would, of course, require her to be at all the best parties. Kiki rents a tiny little studio apartment and revels in the hope that her new job and the locale will give her the freedom she’s been longing for.

Kiki proceeds to settle into a routine of whirlwind parties and short-term lovers, and she’s enjoying every minute of it.

One invitation would lead to the next, one party to another, the days brightening and lightening as we floated towards summer. I was untethered and delirious on French wine, scurrilous talk, and the view from my little garret. I slipped into this city as though I had never left. As though it had always been home.

Lunney isn’t afraid to namedrop during Kiki’s extravagant situations, so readers will be delighted but probably not too surprised when Kiki ends up at a gathering where Pablo Picasso is holding court. When Pablo is introduced to Kiki, he’s charmed by the lovely girl with her blond bob and easy grace, immediately dubbing her “Kiki Kangaroo.” Kiki’s gossip columnist gig is an easy one for her—readers love her spin on the excesses of the party scene—but Kiki’s talents go far beyond that. So when Pablo sends a note asking her to find a painting of his wife Olga that was stolen from him, she’s intrigued. She’s also excited to pose for such a talented and famous artist.

Unfortunately, Kiki’s carefree life is about to be invaded by a blast from her past. It’s during a conversation with Bertie that she realizes things are about to change.

I hadn’t heard the name since 1919. But no, he couldn’t possibly mean—

I froze. He did mean Fox. My hands shook.

“Kiki, are you all right? You’ve become alarmingly pale.”

“Light me a cigarette.”

He lit up and waiting for me to gulp a few lungfuls. The tobacco smoke hung between us with everything that was unsaid.

“Bertie, have you met him?”

“I was called to his office in Westminster—”

“He never said, and I was too embarrassed to ask over the leather desktop and aroma of self-importance. He has the most wonderful silver hair, which really set off his charcoal Savile Row suit—”

“Did his secretary wear spectacles?”

“He’s a fox, and bespectacled women are his hens. He likes them in his henhouse where he can get to them. Thank God I never needed glasses.”

I gave him a piercing look—what did he know? and how? –and he blushed.

Something broke inside me and sank to the bottom of my spine. It really was Fox.

It’s obvious that Kiki is terrified of this Dr. Fox, and as the story progresses, it’s revealed that she used to work with him while she was a field nurse—and that he has a certain hold over her in which Kiki both revels and by which she is repelled. To make things worse, Fox is threatening Kiki’s childhood friend Tom, who is a deserter that she helped. She’ll do anything to make sure Tom doesn’t suffer, even if it means doing Fox’s bidding.

Tunney has crafted a novel that is exhilarating and atmospheric, perfectly capturing a post-war Paris where people of all types could drown their sorrows and become someone else, even if it’s just for a while. Lunney successfully combines mainstream mystery with spy intrigue, making for an intoxicating concoction, and Kiki is a powerful tour guide. If you like unusual heroines that are the perfect mix of moxie and vulnerability, you can’t go wrong with this one. I can’t wait for more adventures with the fascinating Kiki Button and her singular world.