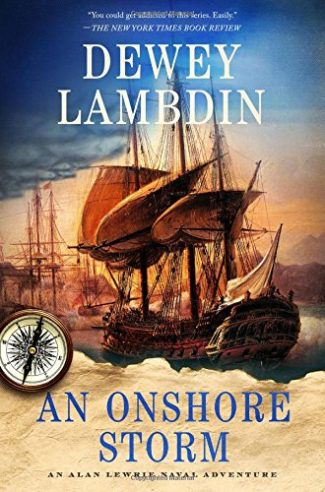 An Onshore Storm by Dewey Lambdin is the 24th book in the Alan Lewrie Naval Adventure series, where Lewrie takes on his roughest adventure: maritime life beyond the navy.

“Arr!” from another startled throat, preceding a loud splash, which drew HMS Vigilance’s Captain from the forward edge of the quarterdeck to the larboard bulwarks so he could peer overside to find a cause for the commotion.

“Think we might’ve killed somebody, sir,” Lt. Greenleaf, the ship’s Third Officer exclaimed, standing on the slide of one of the 18-pounder carronades to look straight down the ship’s side.

“Oh, God’s balls,” Captain Sir Alan Lewrie, Baronet, groaned as he beheld the near-disaster. “Fetch that man out of the water before he drowns!” he shouted down.

Contrary to what the opening hijinks suggest, An Onshore Storm opens at a rather quiet period of Captain Sir Alan Lewrie’s life. It’s 1807, and he’s currently moored off a Sicilian beach supervising the naval support and transport for the troops of the 94th Regiment of Foot, led by Lt. Col. Tarrant. The war with Napoleon’s France has settled into an often boring, arduous slog, and Lewrie’s command consists mostly of harassing French-held ports and encampments in between long periods of drilling and inactivity.

Being under-manned and under-supplied, there’s little Lewrie can do to change this. And yet, he still has to worry about naysayers back home who could strip him of his command—and end his “experiment” of a combined effort between Navy and Army branches—should he fail to tally up enough victories to justify his existence.

To that end, Lewrie and Tarrant are forced to turn to insalubrious characters to acquire the information necessary for future raids.

“Mister Quill sent me a note saying that something along the Gulf of Saint Eufemia could be promising, Major,” Lewrie told him.

“What an odd way to make war,” Tarrant commented with a wry shake of his head, “and not just the boats and the ships, hah hah. Government spies and hired-on skulkers, good Lord.”

“Worked well enough so far, sir,” Lewrie replied, even if he found their situation perhaps a bit too novel.

It was not as if Lewrie had never worked with agents from the Foreign Office’s Secret Branch; he’d been their gun-dog, off and on, since 1784 in the Far East, but never in anything that struck him as so ramshackle.

Quill’s prime source of information was Don Julio, Don Julio Caesare to be precise, though that could not possibly be his given name. He was a charming brute, perhaps a heartless cut-throat when necessary; a smuggler, a thief, a pirate if needs must, and a man whom even Quill had cautioned was “the greatest rogue.”

An Onshore Storm isn’t so much a straightforward narrative as it is a series of interconnected vignettes. There is no singular overarching plot. Instead, events wax and wane in a realistic fashion. We’re carried along on the tide as Lewrie and his command take out a bridge crucial to the French, execute a raid on the enemy’s supply train, deal with a new ship led by an incompetent officer, and fight back against violent treachery.

Interspersed between moments of combat and naval derring-do are plenty of well-researched details about the Napoleonic wars, weaponry, 1800s England, and military politics. There’s no doubt that Lambdin knows his stuff front to back, from the layout of a full-rigged ship to the colorful language of 17th-century sailors.

For the history buffs in the audience, colorful anecdotes are peppered in:

“I was told that at some battle during the American Revolution, I forget which,” Midshipman Langdon spoke up, “that Major Ferguson took aim at a mounted American officer out in front of his lines, and almost fired at him, but didn’t. He later said that he did not have the heart to shoot a man, an officer especially, so intently involved with what he was doing… and that officer was George Washington. If he had, we might have defeated the rebels.”

Though the book concludes with a properly thrilling and bloody climax—with many of our heroes charging into muskets and bayonets—the stakes are never too high for Lewrie and Co. The French remain nameless and almost entirely faceless, foes fired upon from a vast distance thanks to Vigilance’s far-reaching cannons. It’s realistic for a story centered around 1807 naval warfare, yes, but it doesn’t get the blood pumping too much.

The greatest conflict comes from within: not long after Lewrie’s command is strengthened by a new ship, he’s forced to relieve said ship’s captain from duty due to the young man’s over-exuberance for punishment and flagrant disrespect of his men. With one of Lewrie’s trusted officers assuming the man’s command and the young Dickson demoted and forced to serve aboard the Vigilance, our primary hero courts personal disaster. Dickson has influential patrons back in England, and he doesn’t hesitate to spill his anger into his letters back home.

And just how trustworthy is the piratical informant Lewrie and Tarrant must rely upon?

All in all, this 24th installment in the Alan Lewrie series is tailor-made for hardcore naval enthusiasts and history buffs, stocked with colorful characters and brimming with military minutiae. Dewey Lambdin’s writing style evokes his setting, with plenty of exclamation marks, Important Words Capitalized For Emphasis, and the salty dialogue one expects from rugged sailors. And enough is left unresolved to leave room for a 25th installment—may it be smoother, more exciting sailing ahead for our heroes.