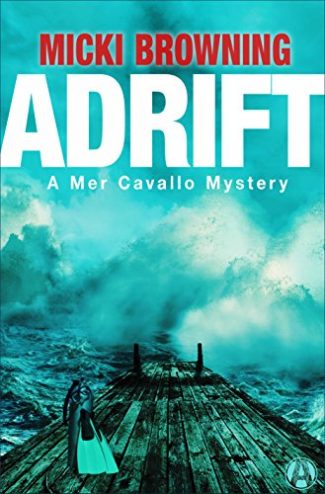 Adrift by Micki Browning is a breathtaking mystery debut about marine biologist-turned-divemaster Meredith Cavallo, who stands accused of a chilling crime after a dive gone wrong. But do the murky circumstances point to an accident, a murder, or a supernatural encounter?

I’ve always daydreamed about living somewhere like Key Largo, with sun-drenched, lazy days and margaritas at my fingertips. Micki Browning’s Key Largo isn’t quite that Key Largo. Well, it is, but she mines an undeniable current of darkness underneath the golden veneer. Dr. Meredith “Mer” Cavallo—a scientist specializing in octopi, used to spending her time in the frigid wastelands of the Arctic—is working as a dive instructor for a small diving outfit. Unfortunately for Mer, she’s about to have a few weird experiences that will color her life a decided shade of grey in the days ahead. The first is when she rescues a diver named Rob, who was supposedly checking out the presumably haunted wreckage of the Spiegel Grove five miles away.

His alarm quickened her pulse. “What’s getting closer?” The ocean had plenty of docile animals that looked like maneaters to the inexperienced, and just enough real dangers to keep things interesting. She dipped her face in the water and scanned beneath them. Nothing. “How are you feeling?”

“I’m…my…did you see that?” He pointed behind her.

His fear infected her. She twisted around but didn’t see anything. “What? What did you see?”

He tensed, shuddered, then went limp.

His claim that he was exploring the Spiegel Grove is nearly unbelievable, but there doesn’t seem to be any reason for him to lie. It doesn’t seem possible he could have ended up so far away from the wreckage. He also claimed to have witnessed some sort of presence at the site. Mer’s scientific training makes her naturally skeptical, but it’s not until she’s asked to take a team of paranormal investigators out on the LunaSea that her scientific nature is put to the ultimate test. The leader, Ishmael Styx, is an overbearing jerk, and it’s immediately obvious when he stops by the shop to inquire about the charter.

“Actually, I want to charter the entire boat.”

“Honey, I need your big boat.”

“That’s Doctor, honey.” Mer plastered a neutral expression on her face and flipped to the second tab. Researching the Arctic was so much easier than customer service. Plus, cephalopods weren’t nearly as slimy as some people.

Ishmael and his group go by the ridiculous name of Spirited Divers Paranormal Scuba Team, and they’re filming a documentary about ghostly activity on the Spiegel Grove for the Expedition channel. Before they set out, Mer meets the team: the prickly Lindsey Hatchet, the team’s underwater photographer and part owner of the group; Amber Green, the land photographer and Ishmael’s fiancé; Rabbit, who’s in charge of underwater videography; and Echo, who handles sound engineering. Everyone except for Ishmael—and maybe Lindsey—seems pretty decent, and Mer prepares herself for what she assumes will be a by-the-books dive. Mer is initially alarmed when she discovers how inexperienced Amber really is at diving.

“Thanks. I’m so excited. This is going to be my tenth dive.”

Amber nodded, smiling. “I just got my advanced certification. This’ll be my very first deep dive without an instructor.”

“Wonderful.” Mer tightened the straps. “Advanced” was a misnomer in diving. A person could graduate from a basic course and go straight into an advanced class without any dives in between. Amber barely had the skills to keep herself out of trouble, and Ishmael wanted her to take photographs.

Mer is uneasy, but there’s really nothing she can do, and the dive commences. Here’s where things really get creepy. I love the ocean, but its depths are daunting, and imagining a night dive in over 100 ft. of water in a wreck that’s supposed to be haunted curls my toes a little. Browning does a fantastic job creating atmosphere during this dive, and it will come as no surprise to readers that something strange happens while investigating the wreck. To Mer’s horror, the worst that can happen does. She comes up minus a diver. Ishmael goes missing during the dive, and this kicks off a police investigation that, unfortunately, focuses on Mer.

I kind of fell in love with the prickly Mer. She is less than thrilled having to deal with Shakespeare-quoting Detective Josh Talbot of the Monroe County Sheriff’s Office, who seems to think she’s hiding something. She’s just as stumped as everyone else, but what she doesn’t believe in is ghosts, and she resolves to get to the bottom of what happened. Complicating matters is the return of a long-ago love, Ian Phillips, who goes by Selkie and now harbors a very mysterious past. Mer is undeniably attracted to him, but he puts off conflicting signals. To someone as analytical as Mer, it’s downright frustrating.

This is a fast-paced, spooky read with an irresistible heroine that’s not to be missed.