Review: A Study in Treason by Leonard Goldberg 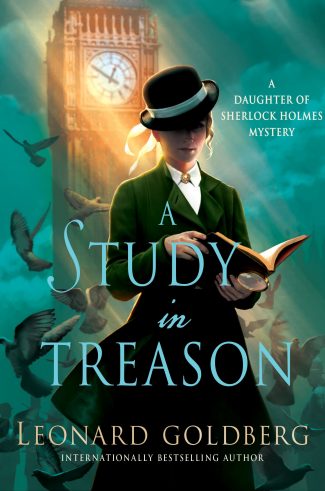 A Study in Treason

Take a visual tour of A Study in Treason with GIFnotes!

A Study in Treason maintains the conceit of Doyle’s work, in that we are treated to an outsider’s perspective of the detective. John Watson Jr. is the narrator, perpetually recording the insights and exploits of Joanna, the titular daughter of Sherlock Holmes (and Irene Adler, of course).

While this is the second novel in the series, a reader is not at a complete loss diving in here. Which is rather the case with Doyle’s original stories as well. There are tidy summations of the previous book’s events to give the reader something to hold onto.

Gazing at the two before me, I could not help remember how my life had changed since I first met Joanna only months ago. At the time I was, and continue to be, assistant professor of pathology at St. Bartholomew’s Hospital where I spent long hours, but always managed to look after my father who was still residing at 221B Baker Street and was unfortunately in declining health. Despite retirement and the fact that his close colleague Sherlock Holmes was long dead, people still sought his advice on criminal matters, which he dealt with in a most gentle and adroit manner.

The descriptiveness holds a similar flavor to the Watson of Doyle’s works, though given that this takes place in 1914, there are some changes in the overall attitudes. John Jr. clearly has a similar sense of wonder in regards to his Holmes as his father did to Sherlock.

But Joanna obviously inherited her biological father’s and mother’s brilliance. She read voraciously on a wide variety of subjects and became a highly skilled nurse, one of the few professions that allowed her to use her finely tuned brain. Her medical training led her to become an amateur forensic detective.

Joanna Blalock is a widow with a young son when John meets her for the first time. She was also the mastermind who engineered the solution to their first mystery together. John is definitely florid in his descriptions of Joanna, which borders a touch on the overdone—but Watson Senior was similarly overdone with his descriptions of Sherlock.

The book opens after Watson Senior has had a stroke, and Joanna is helping the man’s recovery while her son is off at school. Their idleness is interrupted, however, by Lestrade. Tangentially, at least, as he sent Sir Harold to Watson for his help.

The novel has the hallmarks of a traditional Holmesian story. It’s an interesting take on the genre, written well in the style of the period.

I did find myself wishing to see more into Joanna’s thought processes, but then I tend to prefer seeing into the head of the character picking apart the mystery. (Which was my general complaint regarding the original Holmes stories as well). The outsider’s perspective is thorough and well-done, but I definitely prefer first-person perspectives to be told from the perspective I’m most interested in—which, given that this is a Daughter of Sherlock Holmes Mystery, would be the aforementioned daughter.

I completely understand why Leonard Goldberg went with Watson, but it did lessen some of my interest in the story. I wanted more of Joanna. I was also a little confused by her choice of occupation. A brief reminder: “… became a highly skilled nurse, one of the few professions that allowed her to use her finely tuned brain.” I mean, there were female doctors at this time. There were female police officers. Scientists. With genetic progenitors like Adler and Holmes as well as her general outspokenness, I sort of expected her to be more progressive in that regard.

Regardless, Goldberg has written well within the Holmesian style, producing a book that would fit into Doyle’s canon. For a fan of all things Sherlock Holmes, it’s well worth a read, and I’ll certainly look out for the next installment in the series.

Read an excerpt from A Study in Treason!