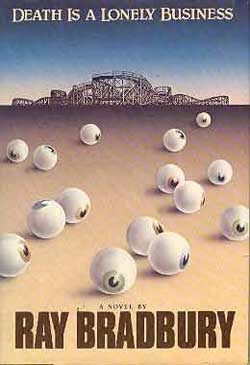 I suspect most people think of science fiction and fantasy when they hear the name Ray Bradbury, who—along with Isaac Asimov, Phillip K. Dick, Robert A. Heinlein, and Arthur C. Clarke—represented the very best of modern thought-provoking and socially-conscious escapism. His Fahrenheit 451, The Martian Chronicles, The Illustrated Man, to name a few, are required reading for any serious student of sci-fi/fantasy. But apart from his legions of dedicated fans, many may not be aware that Mr. Bradbury took a stab at several noir novels rather late in his career, the first of which was 1985’s Death Is a Lonely Business, his first full-length novel in over a decade. The book is dedicated to several notables of crime fiction including Raymond Chandler, Dashiell Hammett, and Ross Macdonald. To their noir hardboiled legacy, he writes in his own Bradbury-ian elegance, fusing the well-worn (and, frankly, by then, tired) detective novel with a great deal of his distinct lyrical flair. Examples: “books clustered like vultures with their black feathers and dusty golden stares” and “Venice was and is full of lost places where people put up for sale the last worn bits of their souls, hoping no one will buy.” To his credit, Mr. Bradbury never borders on parody or pastiche (a problem I’ve noticed with other writers when attempting to emulate the golden era masters) and instead paves his own path down those shadowed mean streets cluttered with desperate and longing characters.

The novel opens with an unnamed twenty-seven-year old protagonist—a writer very much like the young Ray Bradbury—who irreverently calls himself the Great American Novelist, traveling on a lonely railcar with only one other man on the train. The fellow passenger begins eerily moaning and wandering about, which is enough to creep out the writer, but the chill culminates when the eccentric rider whispers to the writer’s back, “Death is a lonely business.” Bradbury had me wondering in this scene, is this other passenger flesh and blood or a spectral presence?

After the writer quickly disembarks, attempting to forget the dreadful voice “exhaling vapors of fear,” he retires to his barren room where he stares at the blank page of an unfinished book. He lives a meagre existence, with his only source of income being an occasional sale to a detective or science fiction pulp magazine, and those are few and far between. Adding to his despair, he’s missing his girlfriend, Peg, who is studying far away in Mexico City.

The writer can’t shake the peculiar encounter with the stranger on the train—is there more evil lurking? Later, he asks a bartender:

“You ever think something awful is going to happen, but you don’t know what?”

“It’s called the heebie-jeebies.” … The bartender looked over my shoulder as if he saw the ghost of the man on the train there.

The writer wanders aimlessly from the bar, striding along an old canal where some circus wagons had toppled years ago, then discovering a lifeless body in one of the submerged cages. His mind at first plays tricks, imagining it’s an old lion tamer waking up. The ethereal voice haunts him, “Death is a lonely business.” Is this horror unfolding in his imagination? Is he the killer? Or are a real killer’s crimes at hand, with the writer’s thoughts somehow mysteriously adding to the proceedings? The cops show up and try to alleviate his fears, telling the writer that it’s just a transient who accidentally drowned, though he ‘knows’ otherwise and attempts to convince a detective named Elmo Crumley that it could be the first in a series of murders. Ultimately the writer, along with Crumley’s wry help (who seems more interested in being a writer himself than a detective), begins a crusade to determine who the serial killer will claim next and apprehend him before he strikes. The writer suspects a souvenir collector, because he begins noticing odd trinkets like old newspapers, a train ticket, punchout confetti, and a portion of a Scott Joplin picture are missing from the various crime scenes. He makes a list of possible future victims which, to Elmo’s annoyance, pretty much includes the entire community.

A motley bunch of older residents—“everyone is old in Venice, California”—populates this deteriorating, bleak world, and each lonely character seems a little more desperate than the next: a former silent movie star, a canaries-for-sale lady, an obese ex-opera-singer, and so on. Each, like our writer, remembers longingly the Venice of a bygone era, and here’s my one and only knock against the book: the worshipping for this lost Shangri-La goes on and on and on. Bradbury sold me on its past beauty in the first few chapters, but he repeatedly finds new ways of defining the splendor that was Venice. Because of this padding (though understand, it’s beautifully-painted in words), I have a sense this was a short story that at some point was transformed into a longer novel. The tale probably could have been even more effective as a streamlined novella. So, the declining city plays a big part in Death Is a Lonely Business, and obviously, Bradbury has bittersweet memories of a place that had become known by the time he lived there in 1949 as a struggling writer as the “Slum by the Sea.“ In the same way Chandler’s Marlowe battles a valiant, losing war to save L.A., Bradbury’s amateur detective in Venice attempts to turn the clock back on a crumbling paradise by figuring how who is murdering its citizens.

Readers may haphazardly stumble into this novel, after scrolling through a few blurbs here and there, expecting a straightforward, hardboiled novel on the level of The Long Goodbye or The Maltese Falcon. But Bradbury is no Chandler or Hammett, and we don’t expect him to be. Hell, in many ways he’s a far superior storyteller, and I’m thankful he took us back to ”the days when the Venice pier was falling apart and dying in the sea and you could find there the bones of a vast dinosaur, the roller coaster, being covered by the shifting tides.”Death Is a Lonely Business is inspired writing from a master. I’m looking forward to seeing where he takes this character with the sequels A Graveyard for Lunatics (1990) and Let's All Kill Constance (2003).