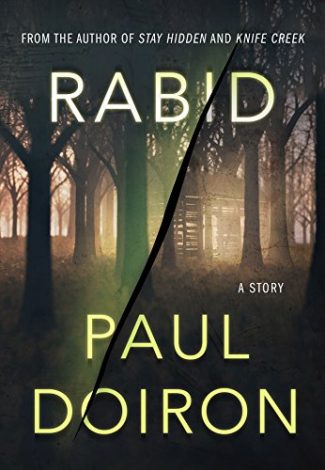 In this original short story in the Mike Bowditch mystery series, Mike is drawn into the story of a gruesome case from his mentor Charley Steven’s past.

Maine Game Warden Mike Bowditch accompanies his old friend and mentor, retired bush pilot Charley Stevens, as he pays a visit to a mysterious woman, the widow of a Vietnam vet, living in isolation in the Maine wilderness. Many years earlier, she had called Charley, then a young game warden himself, for help. She claimed that her badly bleeding husband had been attacked by a rabid bat. But in the succeeding days, despite her husband’s increasingly erratic and aggressive behavior, his wife resisted Charley’s attempts to help, arousing his suspicions that more was going on than met the eye. Was the husband the victim of rabies, or was he suffering from post-traumatic stress disorder? The situation finally erupted into horrific violence, leaving everyone involved deeply scarred. And Charley finally reveals to Mike how he uncovered the awful truth about what actually happened in their home so many years before.

“I have a stop to make,” said Charley Stevens.

It was one of those warm June evenings when you can feel the earth pivoting from spring to summer. The sun had just set behind the ridge, and now the sky was the color of purple lupines.

I kept my left hand on the steering wheel and reached down to lower the volume on the police radio. “Does it have something to do with that box?”

When the old man had loaded the big brown package in the bed of my patrol truck that morning, I had assumed it was something he’d intended to mail. But he hadn’t mentioned the box again all day, and now the post offices were closed for the night.

Charley had a thick head of white hair that just about glowed in the dark. “The Boss asked me to drop it off for her.”

The Boss was what he affectionately called his wife of forty-odd years. Her real name was Ora, and she had the biggest heart of anyone I had ever met, even after an airplane crash had left her paralyzed below the waist. The situation couldn’t have been any sadder: her husband had been teaching her to fly his old Piper Cub, and she had lost control of the fragile plane. A life spent in the wilds of Maine had left Charley’s face weathered, but I suspect guilt accounted for more than a few of the lines across his forehead.

“You know that fire road off the Snake Lake Road—the one where we saw that sow bear and her two cubs? Drive all the way to the end.”

Even for a man of his advanced age, Charley had an unusual way of speaking that was more than just a thick Maine accent. He had grown up in North Woods lumber camps and retained a peculiar dialect that had mostly died out with the last of the river drives. Sometimes I thought he hung onto it out of pure impishness.

He had been riding along with me on patrol all day. The retired game warden did that a lot back then, when I was stationed Down East. He seemed to miss the excitement of wearing a badge and gun and was living vicariously through his young protégé. He still yearned for the daily surprises that come with being a law enforcement officer—the what-the-heck occurrences that make you realize how endlessly inventive human beings are at screwing up their lives.

As directed, I made the turn Charley had indicated. I was unaware that there was even a house at the end of this particular dirt road. I was under the impression it just petered out at the edge of one of the vast wet peat bogs that soak up the rain and fog in easternmost Maine. It had gotten dark enough that I needed my headlights to avoid the lurking rocks and ruts.

Charley’s uncharacteristic silence as we drove gave me a strange, almost sick feeling in my stomach. By nature, the man was a talker. He spun yarns like Rumpelstiltskin spun gold. Falling into any kind of reverie was unlike him.

“How’s your love life these days?” he asked out of nowhere.

My prior romantic entanglement had involved a beautiful recovering drug abuser who had slipped back into addiction before my eyes. I’d gone on a couple of dates afterward with a sultry Romanian waitress who had come to the US on a student work visa but had found we had nothing in common beyond the physical. I would never have confessed this to my friend, but the woman I was secretly infatuated with was his younger daughter, Stacey, a green-eyed wildlife biologist.

“Slow is good,” said Charley patting my knee. “It’s best to take your time before you get hitched. People don’t understand that a marriage is a living thing. It can grow and blossom, but it can wither, too—become diseased even.”

I wasn’t remotely close to getting married, so I had no clue where this had come from.

We passed a small duck pond still swollen with spring rain. I knew it would shrink to half its size as summer made tinder out of the surrounding pine forest. Several small silhouettes flitted against the sky above the quicksilver water. They were bats chasing the insects that hatched at night.

My headlights struck a reflective, diamond-shaped sign that hung from a chain across the road. NO TRESPASSING. I slowed to a stop but kept the engine idling.

Instead of opening his door, he remained buckled in with his big hands braced against the dash—almost as if he dreaded making the delivery.

“Is something wrong?” I asked.

“I need you to wait here. I know this sounds mysterious, Mike.”

He almost never called me by my first name. It was always “young feller” or “son,” although he was nothing like my own late father. I could see the strain in his tanned face. He wanted so much to tell me about this mysterious errand.

“Look, Charley. You don’t have to tell me anything you promised to keep secret.”

He let out a defeated sigh. “Does the name Hussey mean anything to you?”

“Not unless you mean a fallen woman.”

My quip didn’t seem to sit well with him. “I’m talking about the Hussey family. I thought you might have heard the rumors or whatever you’d call them. The local kids dare each other to come out here, like it’s a haunted house, only this one has a real person living inside it. Not yet a ghost.”

I turned the off the ignition and settled in for the tale. “What happened here, Charley?”

“Did you see the bats over that pond back there?”

“Because it all started with a bat.”

Later, I got Ora’s version of the story, which was mostly the same, but different in key respects. If anything, it was even more horrifying. As is often the case when you hear two accounts of a tragedy—especially when those accounts come from a husband and wife—you should probably begin by assuming that the truth lies somewhere in between.

A native of Maine, bestselling author Paul Doiron attended Yale University, where he graduated with a degree in English. The Poacher’s Son, the first book in the Mike Bowditch series, won the Barry award, the Strand award for best first novel, and has been nominated for the Edgar, Anthony, and Macavity awards in the same category. He is a Registered Maine Guide specializing in fly fishing and lives on a trout stream in coastal Maine with his wife, Kristen Lindquist.