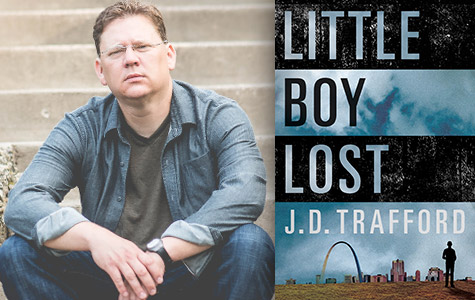 J.D. Trafford is an award-winning novelist who has topped numerous Amazon bestseller lists. His debut, No Time to Run, was selected by IndieReader as a bestselling pick. Mr. Trafford graduated with honors from a top-twenty law school and has worked as a civil and criminal prosecutor, an associate at a large national law firm, and a nonprofit attorney; he’s handled issues of housing, education, and poverty in communities of color. His newest novel, Little Boy Lost (available August 1, 2017), is published by Thomas & Mercer.

Recently, Mr. Trafford entertained questions pertaining to standalone vs. series writing, crafting conflicted characters, the importance of setting, and the role of creative license, among other topics.

What was the impetus for writing Little Boy Lost, and why did a standalone appeal to you as opposed to a continuation of your series?

The main character, Justin Glass, predates Michael Collins and the No Time series. I wrote a Justin Glass story about 15 years ago, but the story was never read by anyone. I had the motive and plot all wrong. So I scrapped it but kept Justin in the back of my mind, searching for a story that would fit.

Then, with the recent rise of the Black Lives Matter movement and questions about our justice system, I finally had a context and a world for Justin Glass to come alive. I went back to St. Louis and Ferguson shortly after the Michael Brown shooting. Boards were still on some of the burned-out buildings downtown. The memorial of stacked stuffed animals and messages was still on the curb where he was shot. I decided, then, that this was the story I needed to tell, not necessarily a story about Michael Brown specifically but about the city and its struggles.

Your protagonist, Justin Glass, is conflicted between mind and morals. How does this allow for a juxtaposition of his personal and professional selves, and in what ways do you see his journey as representative of the traditional Everyman archetype?

It’s rare that a person’s personal and professional selves are completely aligned, and interesting characters in books amplify that tension. Lawyers, in particular, have some of the highest rates of depression, chemical addiction, and suicide compared to other professions. A big part of it, I think, is the disconnect between where a person imagined themselves to be on their first day of law school versus where they are as a practicing lawyer (i.e., hustling for clients, trying to get bills paid, paying off student loans, jockeying for status).

Justin Glass is representative of this Everyman archetype, although he comes from a prominent St. Louis family. Over the course of the book, he has to find peace in the compromise and ultimately decide who he is and when he will take a stand.

How do you use the lens of fiction as a means of illuminating everyday realities, and in what ways are the racial tensions that underpin this work evocative of the current world climate?

There are a limited number of people who will pick up a nonfiction book about race, politics, and wealth. And, of those people, most only read nonfiction books that generally confirm the opinions they already have. Perhaps those nonfiction books deepen an individual’s understanding of a topic, but few works of nonfiction actually change somebody’s mind.

Fiction, on the other hand, has the power to reach a much broader and diverse audience. It creates an opportunity to expose readers to different viewpoints and information. Fiction can serve as a foundation for conversation in a way that nonfiction cannot. In the end, however, the primary focus of fiction is to tell a compelling story.

Although issues of race and poverty are present, I worked hard in Little Boy Lost to put the story first. I want readers to care about the characters and, ultimately, draw their own conclusions about the societal issues that the book touches upon. 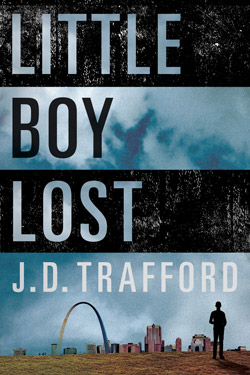 You’ve lived in St. Louis, which serves as the backdrop for this story. In your opinion, how does setting enhance narrative, and in what ways does knowing a place intimately benefit the development of atmosphere?

I think that location is another character in a story. It needs to be treated with respect, and just like a flesh-and-blood character, the location has a role to play in the story’s development and mood. In the No Time books, the Sunset Resort and Hostel in Mexico represents freedom. In Little Boy Lost, St. Louis mirrors the loss and grieving that is being experienced by Justin Glass. I think that St. Louis is still mourning the loss of industry, the departure of Fortune 500 companies, and the abandonment of its core. Like other Rust Belt cities, it’s searching, still trying to find its way in a world that has changed dramatically since the city’s peak at the 1904 World’s Fair.

I'm assuming that you have a low tolerance for creative license when it comes to taking liberties with legalities in crime fiction. How does this influence the lens through which you view storytelling, both as a writer and reader of the genre?

I am not a purist. I bend things to keep my own stories moving, so I don’t freak out when I read a legal thriller or mystery that does the same. Sadly, practicing law is often not exciting or glamorous. A realistic legal thriller would be hundreds of pages describing a lawyer staring at their computer, typing memos, and figuring out their billable hours. The antagonist in such a story would likely be a printer with low toner or one that constantly jams.

That being said, my background has a big influence on what I write. I enjoy demystifying the “law factory.” The courthouse is one of the few places left in America where people of all classes, races, and education levels collide. It is filled with all kinds of people, and I think they provide an opportunity to learn about our current society and community values and to just be curious about what’s happening in our communities.

Leave us with a teaser: What are you working on now, and what can readers look forward to next?

My next book is not a continuation of Little Boy Lost. Its working title is Good Intentions, and its main character is a struggling young judge assigned to handle child protection cases in Oakland, California. When his mentor is murdered and one of the children on his caseload dies, he must repair his professional reputation and find who is responsible for his mentor’s death.

J.D. Trafford is an award-winning author who has been profiled in Mystery Scene Magazine (a “writer of merit”). His debut novel was selected as an IndieReader bestselling pick, and his books have topped Amazon's bestseller lists, including Amazon's #1 Legal Thriller.