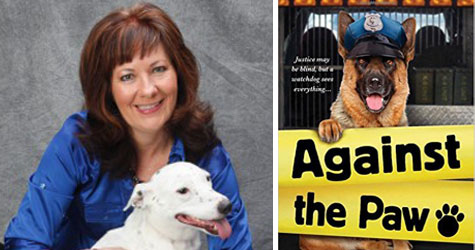 Diane Kelly, author of the Paw Enforcement series—the latest of which, Against the Paw, is available now!—was kind enough to answer some of CrimeHQ's questions about her writing, what she's reading now, and what kind of dog would Sherlock Holmes be!

What mystery/crime authors inspired your writing?

I’m a huge fan of Janet Evanovich and Carl Hiaasen. I love the crazy juxtaposition of humor and crime in their books, as well as the over-the-top zany characters, such as Lula from the Stephanie Plum series and Skink and Chemo from Carl Hiaasen’s books.

What would your murder weapon of choice be?

A shovel, because it could be used not only to commit the crime but also to bury the evidence.

Tell us about Megan Luz. Where did you draw her from? Was she based off anyone in particular?

Megan came about after I developed Sergeant Brigit, the K-9 in my series. I realized it would be fun to make the human handler have things in common with the dog, who is a shepherd-mix mutt. Thus, I gave Megan a mixed pedigree, too, making her part Irish—in honor of my own Irish heritage—as well as part Mexican, given that there are a lot of people of Mexican descent in Texas, where the story is set. She has a touch of Cherokee, too.

Both Brigit and Megan are highly intelligent alpha females, with dark hair and sometimes short tempers, and they often find themselves butting their stubborn heads. But, both are very loyal and loving at heart, and they feel a strong bond.

If Sherlock Holmes were a dog, what would he/she be?

Definitely a schnauzer. They have that smart, always-alert look about them and a genteel demeanor. Also, I could totally see a schnauzer wearing tweed and smoking a pipe.

What fictional dog would be your go-to choice for a crime-solving partner? (Besides Brigit, of course!)

Scooby Doo. He’s an experienced investigator, behaves well off leash, and can be bought off with snacks. Also, he never seems to poop, so that would be a plus.

I’m really late to the party on this one, but I’ve just started watching Grey’s Anatomy. I’m also binging on Cuckoo, a quirky BBC comedy. I'm an Andy Samberg fan.

Where it Hurts, by Reed Farrel Coleman. I met him at a mystery event recently and picked up the book there. He’s an interesting guy and a fantastic writer.

I’m also reading Aziz Ansari’s Modern Romance on recommendation (and loan) from my daughter. It’s funny and insightful at the same time.

Diane Kelly is the author of the Paw Enforcement series, which includes Paw and Order and Laying Down the Paw. She is a former CPA and tax attorney, who had several brushes with white-collar criminals during her career. When she realized her experiences made excellent fodder for novels, her fingers hit the keyboard and thus began her Special Agent Tara Holloway romantic mystery series. A recipient of the 2009 Romance Writers of America Golden Heart Award for Best Novel with Strong Romantic Elements, she has received more than two dozen RWA chapter awards. Diane's fiction, tax, and humor pieces have appeared in True Love Magazine, Writer's Digest Yearbook, Romance Writers Report, Byline Magazine, and other publications. She is also a proud graduate of the Mansfield, Texas Citizen Police Academy.