Q&A with C. J. Tudor, Author of The Chalk Man 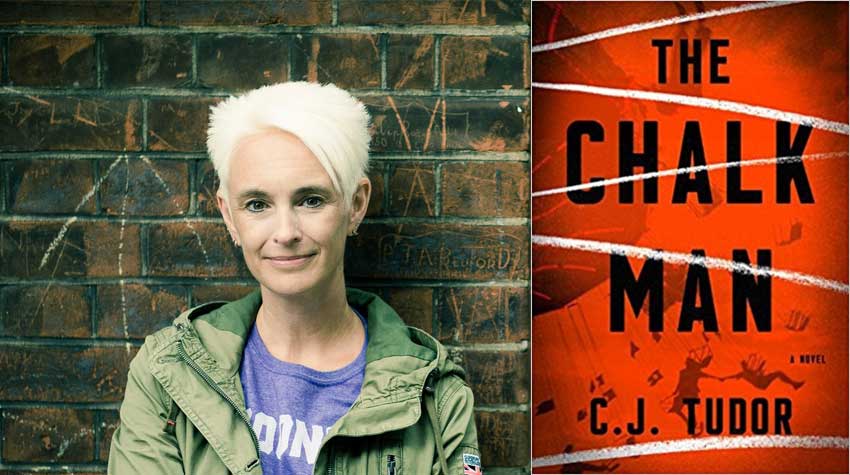 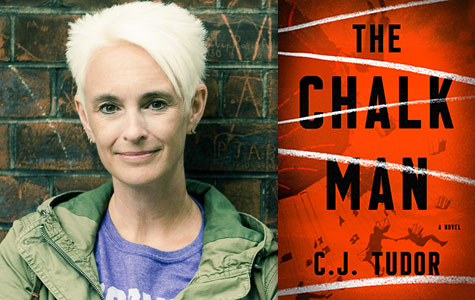 C. J. Tudor is the debut novelist of The Chalk Man. Before becoming a full-time writer, she held a variety of jobs that included trainee reporter, radio scriptwriter, shop assistant, ad agency copywriter, voiceover artist, and dog walker; in the early ’90s, she was also a television presenter for the show Moviewatch, for which she interviewed legendary actors such as Sigourney Weaver, Michael Douglas, Emma Thompson and Robin Williams. Ms. Tudor—more commonly known as “Caz”—makes her home in Nottingham, England, with her partner and three-year-old daughter.

Recently, the author put aside her works in progress to entertain questions pertaining to creative inspiration, balancing dual narratives, capturing a sense of nostalgia, and “earning” twist endings. She also teased what comes next…

What inspired you to try your hand at writing fiction, and how did you know that The Chalk Man was a premise worthy of the effort?

I’ve always written fiction. But I didn’t properly knuckle down to try and write a novel till my mid-30s. 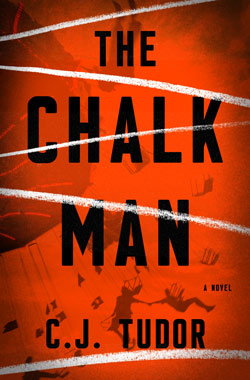 Then, like a lot of debut authors, it was 10 years of rejections, “close but no cigars,” and failed projects. The idea for The Chalk Man—about a childhood game involving chalk drawings that takes a terrifying turn—came from a tub of colored chalks a friend bought for my daughter’s second birthday.

We spent the afternoon drawing chalk figures on the driveway. Later that night, I opened the back door to be confronted by these weird chalk drawings everywhere. In the darkness, they suddenly looked incredibly sinister. I called out to my partner: “These chalk men look really creepy in the dark!”

I started writing the book the next day! But don’t think you ever know if a premise is worthy of the effort. You write something because you have a story to tell. Whether anyone wants to read it or not is another matter!

The book alternates between past and present day. How does this set-up heighten suspense, and in what ways did the complexities of having dual narratives inform your plotting process?

Dual timelines are a great way to heighten suspense because you can leave the reader with a great cliff-hanger in one timeline and then go away for a whole chapter before resolving it. The trick is to keep both narratives interesting so the reader isn’t rushing through one to get back to the other. You need to keep them invested in both.

Although, to be honest, I wasn’t really thinking about the technicalities when I wrote the book. It just worked for the story. I’m not really a plotter or a planner. I just write and see where I end up. Everything else can be fixed in the edits!

In what ways does seeing the adults also as children allow for a sense of organic character development, and how did you use the culture of the ’80s (which you lived through as a young person) to influence their maturation?

I was also able to draw on my own experiences as a pre-teen in the ’80s. The time is still very vivid to me. But you have to be careful not to overplay nostalgia. Throw in too many references to music, brands, or clothes and it just starts to feel like a pastiche. Obviously, the main difference between being a kid in the ’80s and now was the freedom—going off on our bikes, building dens in the woods. But then, we didn’t have iPads!

Please talk a bit about the dualities—darkness/light, horror/heart, etc.—that you play with and their psychological ramifications. Also, what appeals to you about juxtaposition, and how does this allow for the complexity of character and circumstance?

The book is very much about dualities—the fact that there is no clear-cut bad and good. We’re all capable of both. Innocent actions can have terrible consequences.

I also think that horror is heightened when it takes place in a very ordinary, suburban setting. It makes it more unsettling. Especially if you care about the people it’s happening to. In a way, horror has to have a heart—if only to wrench it out!

We won’t spoil anything, but there’s a twist ending many have claimed that readers won’t see coming. In your opinion, what is the trick to creating a conclusion that’s both surprising and satisfying, and how do you weigh believability with creative license when conceptualizing it?

I believe in the adage that you have to earn your ending. You need to give the reader a chance to reasonably guess a twist. It should evolve out of the characters and situations in the book. A twist that comes out of the blue is, basically, a cheat. The key is dropping breadcrumbs so that the reader gets that “Ohhh, of course!” moment just before the reveal!

Book 2 is set in an isolated, former mining village in the north of England. When Joe Thorne was 15, his little sister, Annie, disappeared. And then, she came back. Twenty-five years later, in the same small community, an 11-year-old boy is bludgeoned to death by his own mother.

Joe returns to work as a teacher at the failing school but also to find answers. However, coming back to the place where he grew up means facing the people he grew up with, the things they did … and what they found.

I think it’s creepier, twistier, and darker than The Chalk Man. You have been warned!!