Q&A with Carlene O’Connor, Author of Murder in Galway 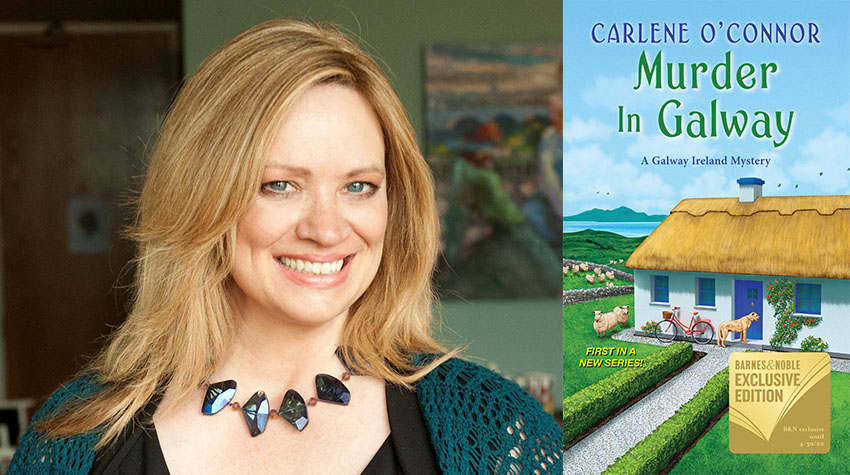 Carlene O’Connor is the USA Today bestselling author of the four-book (and growing) Irish Village Mystery Series; the latest entry, Murder in an Irish Pub, was released in February. She comes from a long line of Irish storytellers, which includes her great-grandmother, who emigrated from the Emerald Isle. Ms. O’Connor divides her time between Chicago and Ireland, and counts a real-life walled town in County Limerick as the inspiration for her fictional Kilbane, County Cork. Her most recent novel, Murder in Galway (available April 30, 2019), marks the launch of a new series; the book will be available exclusively from Barnes & Noble until April 30, 2020.

Recently, the author kindly indulged questions pertaining to conceptualizing a new series, drawing upon her own experiences to inform her character’s travels, maintaining credibility with an amateur sleuth, the benefits of real-life vs. fictionalized settings, and how family tradition informs her storytelling. She also teased what comes next, both as Carlene O’Connor and the pseudonymous Mary Carter.

Murder in Galway is the first book in a new series. What are the challenges of conceptualizing a story that both stands alone and sets up an ongoing arc?

When writing a series, you always know that the specific mystery will be solved, but what continues are the characters and setting that you are building. As long as I’m true to building the world, and character, I don’t have to worry beyond the first book. I was also told that it would be two years before the next book was released since for this first year it’s an exclusive with Barnes and Noble, and the second year it will go through all the regular outlets, so book two wouldn’t be out until the year after that. But because this protagonist has a job sourcing architectural items, it will allow her to travel all over Ireland so there will never be a shortage of mysteries to solve.

Your protagonist, Tara Meehan, is a New Yorker who travels to Ireland to fulfill her mother’s final wishes. How were you able to draw on your own experiences with splitting time between NYC and the Emerald Isle to develop her character – and do you find that where you are in the world influences your state of being?

Now I live in Chicago, but I did live in New York City for fifteen years and hope to work my way back in the near future. Although I make several trips to Ireland every year, I would love to extend that time as well. But I did draw upon my time as a New Yorker when developing Tara’s character as well as my trip to Galway and the Aran Islands, which was a magical time for me—and I was thrilled to work some of my experiences/observations into the book. Writers are always mixing real life in with their fictional worlds—or at least I am—although by the time the book is finished, my life is much less recognizable as the fictional world takes on its own shape.

When Tara arrives at her uncle’s cottage, she discovers a suspiciously dead body at the threshold – and that Johnny is missing. How does this motivate her actions as an amateur sleuth – and in what ways do you endeavor to balance an underlying sense of credibility with the readers’ willing suspension of disbelief?

Maintaining credibility with amateur sleuths is my biggest challenge with writing cozy mysteries, although thankfully the readers love them and are willing to suspend disbelief. Ireland doesn’t have many murders at all, which is the first alternative reality I’m working with. But just like I was always willing to watch another episode of Murder, She Wrote week after week, there is an understanding that we’re breaking some norms to keep this adventure ongoing. That doesn’t mean that anything goes—it’s still on the writer to work within that scope and to make it as authentic as possible. It always helps to give the character a personal and compelling reason to get involved—in this case, trying to find her missing uncle—and at the same time noticing the local guards are quick to decide that her uncle is the guilty person before a thorough investigation is even underway. Tara surprises herself by feeling a sense of familial obligation of protecting a family member—even one she’s never met, especially since it comes at the time when she’s just lost her mother—and the last real family connection she had. And the fact that everyone seems to want her to go away ignites a stubbornness in her that’s both a New York and an Irish thing. Lastly, as a designer, she’s used to thinking in creative ways which helps her put together the pieces of this case.

While your first series is set against a fictional backdrop, Galway is a real place. What are the pros and cons of utilizing an actual locale – and how can a setting become its own character within the story?

The pros of an actual locale are of course drawing on the wealth of information that’s already available about the place, and Galway is such a vibrant, cool city. My first hour in the city I was roped into throwing knives up to a man on a unicycle and for those who read the book, that might ring a bell. I also took a trip out to the Aran Islands, which is also featured in the story, and as I was writing the novel, I could picture everything clearly. It’s also big enough that I can tweak here and there—there is no salvage mill in Galway, at least not the one I created, and on the flip side there are details that a local person would have added that I am not privy to, so within the city of Galway I’ve taken some creative license. But Irish settings are so unique, vibrant, and charming that the place does become a character, a backdrop, a strong foundation. It’s hard to visit and not get the “Irish bug.”

You come from a long line of Irish storytellers. How has family tradition informed your creative sensibilities – and how have you honed these talents into a career?

My mother and my grandmother weren’t writers, but they were both big readers and both fantastic storytellers. I’ve always been better at writing than orally telling a story, so I’m always awed by the other skill. And I’m sure if you asked either of them how they became so good at telling a story, they wouldn’t have a quick answer, or may not even know the answer. But the Irish I know are always good at telling tall tales or embellishing, dramatizing for their audience. The “gift of gab”, you might say. I was reading and writing at an early age, so it almost seems as if it was just in the blood.

Still to come this year is Christmas Cocoa Murder (September 2019) which is a Christmas-themed mystery anthology along with novellas from Maddie Day and Alex Erickson. Mine will feature the characters from my Irish Village Mysteries. Meanwhile I’m hard at work on the fifth book in The Irish Village Mystery Series, Murder in an Irish Cottage. Here’s a two-word teaser for that one: Vengeful fairies. I am also working on turning a novel I wrote under Mary Carter into a screenplay along with my sister who is a screen and television writer in LA. It will be based on my novel The Pub Across the Pond that I wrote under Mary Carter. Ironically, it takes place in a fictional town just outside Galway—it’s about an American woman who wins a pub in Ireland. And yes, book two in the Home to Ireland series featuring Tara Meehan is just over the horizon.