Q&A with Sasscer Hill, Author of The Dark Side of Town 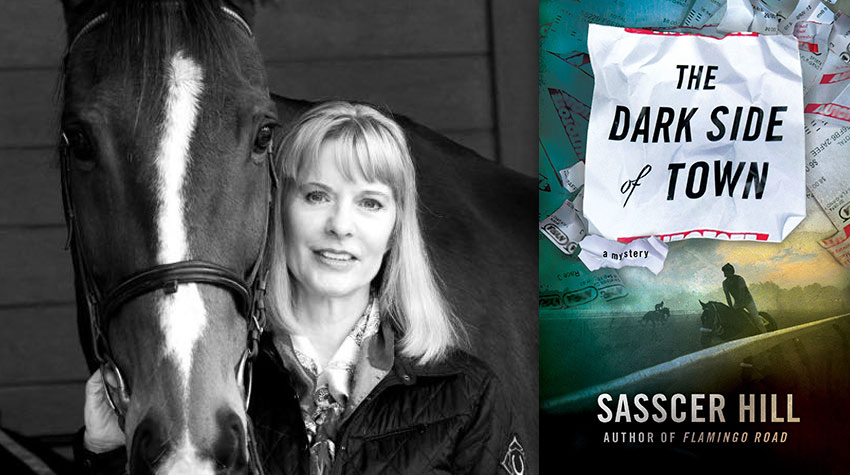 Sasscer Hill is the award-winning author of the Nikki Latrelle and Fia McKee mystery series. She was involved in horse racing as an amateur jockey and racehorse breeder for more than half of her life, and she sets her novels against the backdrop of big money, gambling, and horse racing. Hill’s mystery and suspense thrillers have received multiple award nominations, including both Agatha and Macavity Best First Book Awards as well as a nomination for the Dr. Tony Ryan Best in Racing Literature award. Her newest, The Dark Side of Town, won the Carrie McCray 2015 Competition for First Chapter of a Novel as well as a 2015 Claymore Award nomination for best unpublished mystery-thriller. The title received a starred review from Booklist, which praised: “this is gripping mystery fare and a terrific successor to the racecourse mystery world first carved out by Dick Francis.”

Recently, the author took time from her creative endeavors to entertain questions pertaining to telling a standalone story in a series book, achieving technical accuracy without sacrificing immediacy, engaging the senses through setting, the commonalities between horse riding and writing, and how her education in English literature informs her own fiction.

The Dark Side of Town is the second entry in the Fia McKee series. In what ways do you see this book working as both a standalone story and a continuation of your protagonist’s journey, and how do you endeavor to maintain immediacy while still providing the necessary background for new readers?

Today’s commercial market seems to favor series. Yet publishers want a novel that, even if read out of sequence, is still a complete and enjoyable read. I believe The Darkest Side of Town fits the bill. I like stories that move swiftly forward, with a sentence here and a sentence there to fill in the protagonist’s backstory. I like to use dialogue, which lends a much better sense of immediacy. For example, the reader quickly learns about Fia’s past and its effect on her in seven lines. Fia’s brother, Patrick, calls her in Saratoga, telling her their mother is coming to Saratoga:

“For God’s sake, Patrick, she’s the woman who walked out on us for a wealthier man, the gold digger who cleaned out Dad’s bank accounts. She’s the reason Dad had to sell the farm, yank me out of private school and shove me into probably the worst public school in Baltimore. That was fun. Of course, by then you were at the University of Florida, which she paid for, right?”

“Jesus, Fia! I can’t change what happened back then. You should move on. She’s your mother. You should see her.”

Fia is now officially employed by the Thoroughbred Racing Protective Bureau, which is an actual investigative agency. How does this lend a sense of legitimacy to her sleuthing, and in what ways do you endeavor to balance the technical components of her job with entertainment value?

I met with the President of the Thoroughbred Racing Protective Bureau, a former FBI agent. I also met with the bureau’s vice president. He was a former police detective. They grilled me hard about what I was planning to write, and once they decided I wasn’t a crackpot, they provided valuable information about the bureau. They showed me their massive computer system that collects data and looks for anomalies regarding race betting. The system scans winners and losers, be it betting fans, horses, jockeys, trainers, specific race tracks, offshore betting accounts, you name it, those computers are looking for cheaters.

When I finished writing Flamingo Road, the first book in the series, the vice president wanted to read the manuscript. Later, he sent an email saying he found no errors and I was “good to go.” That was a huge sigh-of-relief email, and it filled me with the confidence to dive into The Dark Side of Town.

Again, I keep the technical stuff interesting by using dialogue to keep the story moving forward. No one wants to get bogged down in technical information. That’s a sure recipe for a half-read book.

The story plays out against the backdrop of the Saratoga Racetrack. In your opinion, how does setting enhance narrative, and in what ways does familiarity with a locale heighten both the writing and reading experiences?

The five senses find no place to come alive more than at a racetrack. The smell of liniment, sweet feed, hay, manure, and the scent of horses is rich and abundant. The screams of the bettors as their picks streak down the stretch, the sound of a whinny, the clanging of buckets, the roar of the crowd, the piercing bell and metallic crash as the steel starting gate bursts open. Let’s not forget the pounding of steel-shod hooves and the noise of a horse’s pulmonary system as he pumps massive quantities of air in and out of his lungs. And that was just two of the five senses! 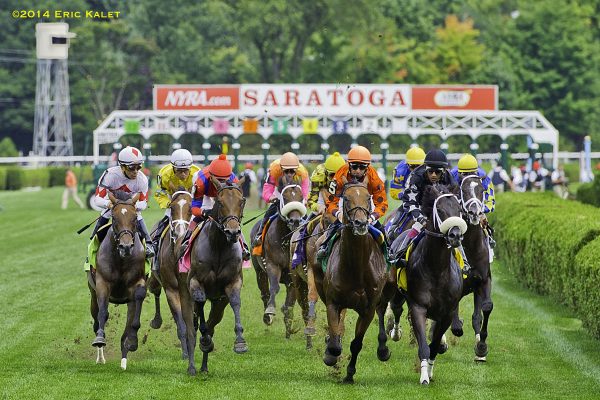 All tracks have these sensory details, but each has its own sights and sounds. Santa Anita Racetrack is dry, warm, and has the majestic backdrop of the Santa Anita Mountains. Gulfstream Park enjoys Florida’s warmth, trade winds, and its location on the Atlantic shore. Saratoga in August is cool, the air is clean, and the track is filled with red and white awnings and a county-fair atmosphere. How can these things not enhance a story and allow the reader to feel like they’re leaning on the rail with Fia as they watch the race and story unfold?

Though fiction, you draw upon real issues to inform your plot(s). What of your own experiences as a jockey and horse owner have you brought to the page, and how does, or can, the lens of make-believe create a more palatable version of the truth?

Thirty years in the business taught me many tricks of the trade. In The Dark Side of Town, young jockey Stevie is riding the favorite in a race when his boss says if Stevie values the life of his little sister, he’ll finish no better than fourth. But coming down the stretch, Stevie’s horse, Glow West, has so much natural ability, they’re in the lead. How, the reader wonders, can Stevie lose the race without it being obvious to the stewards, who would immediately suspend him from future races? And if he doesn’t lose, what will happen to his little sister?

“Stevie hit his horse hard, two times, left handed, making Glow West lug into the path of the horses coming up from behind. Two of these had to check sharply to avoid clipping Glow West’s heels. I could imagine the obscenities their jockeys were screaming at Stevie for his erratic move.

Even though Stevie had smacked Glow West half way over to the parking lot, the game horse spurted forward and gained ground on Dodger and the dark-bay. If Stevie was only pretending to ride, he did a darn good job of flashing his whip and gyrating his body to mimic a hard finish to the wire.

The three front runners flashed under the wire with Dodger a clear winner, the dark-bay hanging on for second place, and Glow West rushing up so fast, he would have beat them both had his sideways movement not lost so much ground. A moment later, the board flashed with an objection raised against Glow West for interference. Somewhere in the grandstand the stewards were reviewing tapes of the race, and I prayed they’d take Glow West down.

As Stevie galloped his horse back to me, I saw him glance anxiously at the board. Suddenly, I realized the kid had planned on a disqualification. Though Glow West’s number was lit up in the three spot, it was flashing with the objection. Bettors held their tickets, stared at the board, and grumbled. I held my breath.

With cheers from some patrons, and groans of anguish from others, Glow West’s number came down and was placed last. I let out a long breath, and as Stevie approached me on Glow West, relief flooded his face.”

Though writing and horseback riding are seemingly disparate, have you found commonalities between the disciplines? Also, in what ways can an education in English Literature both help and hinder the creation of popular fiction?

Regarding an education in English Literature, I have never found it a hindrance. As a teenager, I loved Thomas Hardy, whose wordiness would never sell to an editor today. But I also read Hardy’s poems and felt the power and passion of his ability to say so much in so few words.

“The smile on your mouth was the deadest thing

Alive enough to have strength to die;

And a grin of bitterness swept thereby

I was mesmerized by that poem, and later, I was drawn to the spare, quick writing of Dick Frances and Robert Parker. When I wrote fiction, I seemed to naturally write at a similar pace. My foundation in English Literature taught me the value of archetypes, legends, and good versus evil. To study English Literature is to study the hero’s journey.

Since my two-book contract with St. Martins is finished, I’m writing a new murder mystery about the Irish American Travelers. By happy coincidence, the largest group of these gypsies live in Murphy Village, not more than 40 minutes from my home in Aiken, South Carolina.

Travelers have a fascinating culture. The children are taken out of school by eighth grade, if not before. The girls are married by contract, often as early as 11 years old. Travelers stick to themselves and have little dealings with outsiders. Society believes the Travelers are scam- and con-artists. What would it be like for a girl who grows up in this atmosphere? What if she wants out? Where will she go? What will happen to her?