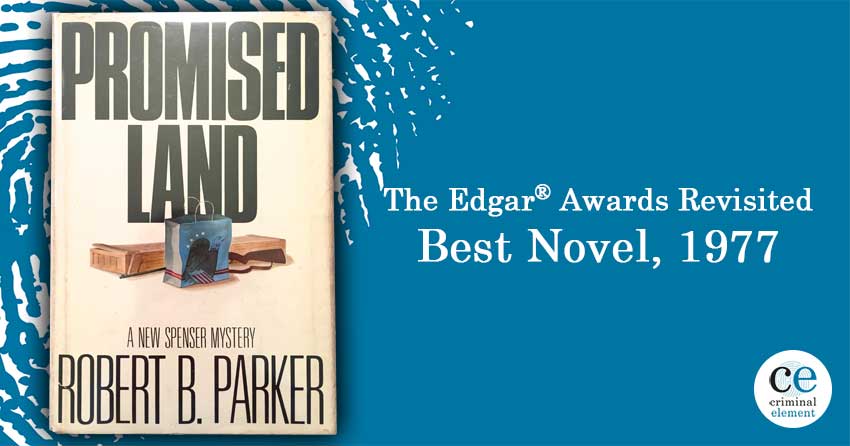 My mom loves Spenser. She has almost every Spenser book Robert B. Parker wrote. Parker himself wrote nearly 70 books, but his characters are so popular his series continued even after his death in 2010.

Years ago, I read a couple of Spenser books because they were on my mom’s shelf, but I mostly loved Spenser: For Hire, the television show based on the character. I’d never read Promised Land, the 1977 Edgar winner for Best Novel, and jumped at the opportunity. By the end of the first chapter, I realized two truths: the book has no modern technology (cell phones! personal computers! the internet!), and great stories are timeless.

In Promised Land, Spenser is hired to find a missing wife—Harvey Shepard’s wife has “run off” leaving him and their kids. By the end of chapter one, Parker sets up what seems like a simple case: find the wife, urge her to return to her husband and kids. As Spenser says, “I don’t do kidnapping” but he’ll find her.

Of course, this ends up anything but a simple missing persons case, and by the end of chapter three, Spenser thinks he might be in over his head. Shepard has a visit from Hawk, a freelance enforcer. Hawk and Spenser go way back to their boxing days. Hawk is a shady version of Spenser, but they’re friends, of sorts. (As an aside for trivia buffs: Promised Land is the first book Hawk makes an appearance.)

Spenser warns Shepard about Hawk, but Shepard wants him to stay out of it.

“Now wait a minute. I hired you to find my wife. Whatever business I’m in with Hawk is my business. Not yours. I’m not paying you to nose around in my business.”

“I don’t know a goddamned thing about Powers. Don’t worry about Powers or Hawk or anybody else. I want you looking for my wife, not peeking into my books, you know?”

“Yeah, I know. But I’ve spent a lot of years doing my business with people like Hawk. I know how it goes. This time Hawk came and talked to you, pleasantly enough, spelled out how much you owed and how far behind you were on the vig and when you had to pay it by.”

“How the hell do you know what we were talking about.”

“And at the end he told you, with a friendly enough smile, what would happen if you didn’t pay. And then I came and he said goodby politely and he left.”

“Harv. Hawk means it. Hawk is a bad man. But he keeps his word. If you owe money, pay it. If you haven’t the money, tell me now, and we can work on the problem. But don’t bullshit me, and don’t bullshit yourself. If you’re dealing with Hawk you are in way, way, far way, over your head.”

I was particularly drawn to Parker’s crisp dialogue. He doesn’t waste time with excessive description or leisurely pacing—when he wants a break in the action, Spenser and his long-time friend turned lover Susan Silverman have a moment. But the story flows, one short scene to the next short scene, moving forward with dialogue and action and minimal introspection. When you think you know what’s going on… you don’t. But Parker never needed elaborate plot twists or cool technology to engage readers. He was an expert on human nature.

I’ve always loved stories that have two plots that seemingly aren’t related, but connect in a fun or original way. Parker delivers on this in spades.

Promised Land is the fourth Spenser novel, and Parker was still forming Spenser’s character, perhaps as Parker was exploring his own personal code. Core beliefs rarely change, but how we interpret them and how we act on them can with maturity, experience, and conflict. Parker used Hawk to mirror Spenser in many ways, differentiating them through Spenser’s code of honor. Spenser understands that he could have gone down the same violent path as Hawk, and only his rules keep him on the right side of the line (more or less.)

“Doesn’t it bother you,” Susan said, “to hurt people for money?”

“No more than it does him,” Hawk nodded at me.

“I don’t think he does it for money.”

“That’s why ah’m bopping down the Cape in a new El Dorado, and he’s driving that eight-year old hog with the gray tape on the upholstery.”

For writers, Promised Land is a terrific lesson in crafting a well-told story, short and crisp. For readers, you won’t miss the cell phones, because this is a story of love, responsibility, conflict, greed, and human nature—the good and the bad. Stories about universal truths withstand the test of time, and that’s why Promised Land was a well-deserved Edgar award winner.

Join us again next Friday when Doreen Sheridan joins us for a review of Catch Me: Kill Me by William Hallahan, the 1978 Best Novel winner. See you then!