Out of the Blue: New Excerpt 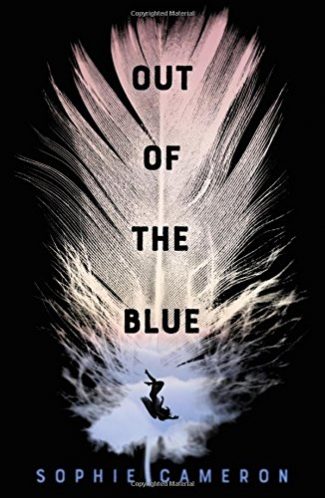 Out of the Blue

Set against the backdrop of a society trying to come to grips with the possibility of a world beyond, Out of the Blue by Sophie Cameron is the story of how one unexpected turn of events can put you on a path toward healing.

When otherworldly beings start falling from the sky, it seems like the end of days are near―but for one girl, it’s just the beginning of an adventure that will change her life.

Jaya’s life has completely fallen apart. Her mother is dead, her dad is on an obsessive wild goose chase, and mysterious winged beings are falling from the sky. For the past nine months, none of them have survived the plummet to Earth, but when a female being lands near Jaya―and is still alive―she doesn’t call the authorities. She hides the being and tries to nurse her back to health.

Another Being falls as we’re driving into Edinburgh. Not here—that would be lucky, and luck doesn’t run in the Mackenzie family.

She leans between the front seats, waving her phone like a newsboy hawking the evening paper. On the screen, a slim, copper-colored woman lies slumped over a pile of broken wood and burst watermelons. Golden blood trickles out from under the debris, tracing shimmering lines in the dust.

“Where is that?” I ask. Perry, our West Highland terrier, raises her head off my lap for a look, then gives a disinterested ruff and goes back to bird-watching through the car window.

At least the Falls have improved my sister’s geography; she was still calling it “Koala Lumper” last month. She taps the screen and a pixelated video stutters into action. The Being is only visible for a second before the crowd swoops. Tourists form a heaving scrum around the body; a woman emerges red-faced and grinning, clutching a handful of feathers. My stomach churns. I’ve seen dozens of clips like this—everybody has, by now—but they still make me want to throw up.

Dad’s head swings between the video and the rain-spattered windscreen. “Is it badly damaged? Masculine or feminine?”

It. Always “it,” not he or she, and “masculine” or “feminine” to describe how they look—as if the Beings were a style of jeans or a Spanish noun. The papers talk about them the same way; it’s their way of making them seem less human. It’s Dad’s way of rationalizing his obsession with them.

“She’s a woman, if that’s what you mean,” I say. “Besides, she’s not just damaged, she’s dead. No one could survive a fall that far.”

“We’ll see.” Dad gives me one of those infuriatingly patronizing smiles that he does so well, and I have to physically bite my tongue to stop myself from snapping at him. Behind us, Rani keeps tapping through photos on Wingpin or 247being or one of the other hundred or so apps she’s downloaded.

“This one looks young.” She nudges her glasses up her nose. “Like, seventeen or eighteen.”

“You’re judging by human standards, though, pet,” Dad says. “We don’t know how time affects their bodies yet. It’s possible that a Being who looks twenty in our terms could be a hundred, maybe even a thousand years old.”

He launches into yet another speech about yet another theory, and yet again, I don’t give a crap. Ever since the first Being fell almost eight months ago, our house has been like the Michael Mackenzie Center for Really Boring Theological Research. I can’t even remember the last time he asked if Rani had lunch money or if I’d done my homework. He’s too busy cutting articles out of newspapers, sticking pins and Post-its onto maps, chatting with Wingdings—a not-so-polite term for angel chasers—in Germany and New Zealand and Japan.

“At the moment it’s difficult due to the different chemical composition of their teeth, but scientists think they may be able to calculate their ages by the end of this year…”

He natters on and on, getting so caught up in his tales that he misses the change of the traffic lights and a pissed-off lady in a 4×4 beeps her horn at him. Rani nods and “mmms” and “uh-huhs” along. I’m pretty sure that even she, eleven-time winner of Daddy’s Girl of the Year, can’t actually be interested in the levels of linoleic acid in the Beings’ fingernails, but she puts on a good act.

I stick my earbuds in and gaze out of the window, nodding along to imaginary music. (My iPod ran out of battery just before we passed Pitlochry, but I’ve learned it’s easier to pretend I can’t hear Dad’s ramblings.) Outside, the drizzly city streets pass by in a blur. Seagulls swoop across the pale gray sky, on the hunt for food. Perry whines and scratches at the door.

“Almost there, Per,” I murmur, stroking the white fur of her back. “Just ten more minutes.”

I know how she feels. We’ve spent five hours in Dad’s stuffy Renault Clio, stuck in traffic on the A9 from Inverness to Edinburgh. It’s a shitty way to spend the summer holidays, but neither of us had any choice in the matter.

In hindsight, I should have known something was up when I woke to the smell of pancakes last Saturday. It was the first time Dad had cooked in months; ever since the Falls started, we’ve lived on a diet of microwave dinners, cereal, and takeaway pizzas. Just as Rani and I had finished drenching our plates in maple syrup, he gave a nervous cough.

“How would you two feel about going down to Edinburgh for a few weeks? I think…” He was trying to sound casual, but I could tell from his hesitation that I wasn’t going to like what he had to say. “I think I could catch a Being there.”

My food went cold as I listened, openmouthed, to his plan. He’d done some “research” (i.e., chatting with other Wingdings on CherubIM), and based on the fact that southeast Scotland has had the highest number of Falls in the world, had “come to the conclusion” (made a wild guess) that another one was due to land in Edinburgh “within the next few weeks” (at some point in the future, or possibly never—he’d figure out the details later).

“Think about it, girls,” he said. “We’d finally be able to find out where they’re coming from and why they’re falling.”

I put up a fight. Dad pretended to listen, but when I finally ran out of reasons why this was the stupidest idea since chocolate teapots, he just smiled and ruffled my hair.

The car glides through a puddle, splashing the windows with murky rainwater. My phone buzzes. I know it won’t be from Leah, but my heart leaps with hope all the same. Instead, I find Emma’s name on the screen.

Look what sad sausages we are without you! Attached is a photo of her and Sam pretending to cry, their frowns hidden behind curved hot dogs. The sky above them is bright blue, perfect weather for a barbecue. They’re only two hundred miles away, but suddenly the space between here and home seems infinite.

I’m tapping out my reply when Rani pipes up with another update. My sister is on constant Being-watch. She could tell you when and where each one fell, what he or she looked like, sometimes even how much their blood and feathers sold for. Personally I think there’s something kind of creepy about an eleven-year-old trawling the internet for news of dead bodies, but Dad finds it useful.

“Listen to this,” she says. “‘Today’s news means that seven Beings have now landed in Malaysia. The only other country to have hosted as many Falls is Scotland, also with seven; Russia has seen five, and Algeria four.’”

I twist in my seat to face Dad. “What if you got it wrong? What if the next one falls in Malaysia? I mean, they’ve had just as many, so it’s just as likely, right?” I kick my right foot onto the dashboard, jab a toe at the sealskin-colored sky. “Maybe we should be on our way to Kuala Lumpur right now. At least it’d be sunny there.”

“Malaysia’s a lot bigger than Scotland, Jaya,” Dad says, swatting my shoes away. “Plus, the Falls over there have been scattered all around the country, whereas here they’ve had seven within thirty miles of the city. There’s no comparison. If I’m going to catch one anywhere, it’ll be in Edinburgh.”

I grit my teeth, trying to still the anger bubbling up inside me. He’s so stupid. This whole “plan” is so ridiculous. You can’t catch a Being. You just can’t. They fall at unbelievable speeds. They’ve smashed through buildings, turned highways into craters. One caused a mini tidal wave when she fell in the South Pacific, and another killed a woman when he landed on her in a town square in Armenia. It’s not a bloody Looney Tunes cartoon: you can’t stick a trampoline under them and spring them back to safety.

Nobody knows when the next one will fall. Sometimes three will tumble down in one day, and sometimes weeks will go by before another appears. There are scientific and religious institutions pouring billions into working out a pattern, but they haven’t even come close to finding one. It’s not like Dad, former sales and marketing manager for Tomlinson Cigarettes, now stay-at-home layabout, is going to be the one to crack the code.

He makes a right turn onto a brightly lit street of shops and restaurants. Outside Pizza Express, a man in a kilt and tinfoil wings is playing something that sounds vaguely like Robbie Williams’s “Angels” on the bagpipes. Dad sings along, drumming his fingers on the steering wheel. Rani joins in for the chorus. They belt it out together, carefree and off-key, the excitement crackling off them like static. A dash of pity simmers with my anger. He really thinks he can do this.

He actually thinks he’s going to catch an angel.

Sophie Cameron is a Scottish writer. She attended the University of Edinburgh and is now based in Spain, where she spends her time reading, running, and learning lots of languages. Out of the Blue is her first novel.