November 25, 2019
Join Diane Kelly, author of the Paw Enforcement mystery series and unofficial pupper pundit, as she shares 9 insights about K-9s she learned in her research. Comment on this post for a chance to win a copy of Paw of the Jungle the eighth book in Diane's series. 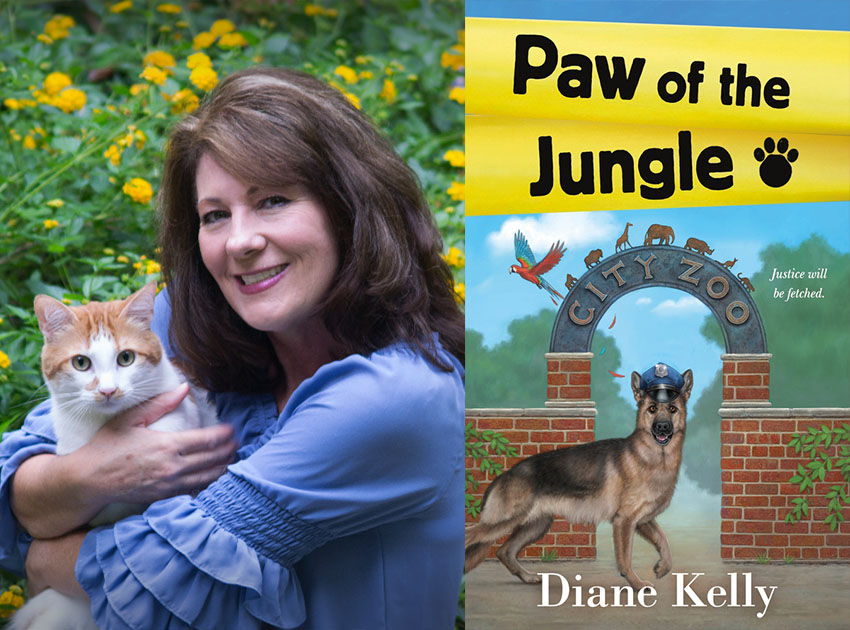 Having grown up with multiple dogs and now living with three spoiled mutts, I’ve learned quite a bit about the canine species. Of course, all of the dogs in my family have been consistently unemployed, unless you count barking to announce the arrival of the mail carrier as a job. When I set out to write my Paw Enforcement mystery series, which stars an all-female K-9 team, I knew I’d need to perform some in-depth research on working K-9s to give the books authenticity and to make the most of the promising premise. To learn more, I read about dogs working in law enforcement, interviewed handlers, and spent several days at a K-9 conference attended by both handlers and dogs alike. During the process, I learned many fascinating facts about K-9s and the canine species. Did you know: 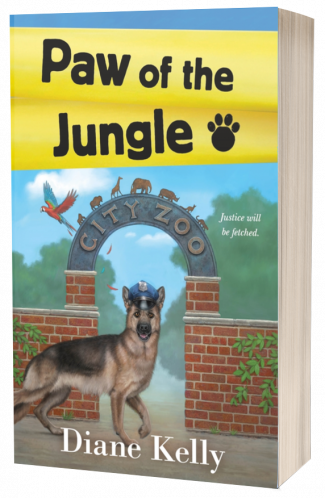 About Paw of the Jungle by Diane Kelly:

Police officer Megan Luz and her K-9 partner in crime, Brigit, are on all fours as they try to solve their latest Lone Star mystery.

At the Zoo
The weather is beautiful, work is slow, and her canine colleague could use a walk. What better day for Megan to take Brigit to the Fort Worth Zoo, where they can let loose and witness the law and order of nature unfold? But what begins as a fun field trip turns serious when a pair of rare hyacinth macaws named Fabiana and Fernando goes missing. Is the new custodian, a gentle soul who happens to be an ex-convict, to blame? Or is something far more sinister afoot?

And on the Hunt
The birds are worth thousands of dollars, and the list of people on the premises who might have stolen them is long. Soon other animals start disappearing. . . and Megan and Brigit have their hands and paws full of suspects. But when a rare black rhino is taken from the zoo, presumably for its black-market-friendly horn, time is of the essence. Can Megan and Brigit find out who’s behind the mystery―before they too become prey?

Comment below for a chance to win a copy of Paw of the Jungle by Diane Kelly!

Paw of the Jungle Comment Sweepstakes: NO PURCHASE NECESSARY TO ENTER OR WIN.  A purchase does not improve your chances of winning.  Sweepstakes open to legal residents of 50 United States, D.C., and Canada (excluding Quebec), who are 18 years or older as of the date of entry.  To enter, complete the “Post a Comment” entry at http://www.criminalelement.com/nine-fascinating-facts-about-k-9s/ beginning at 12:00 a.m. Eastern Time (ET) November 25, 2019. Sweepstakes ends at 11:59 p.m. ET December 9, 2019. Void outside the United States and Canada and where prohibited by law. Please see full details and official rules here. Sponsor: Macmillan, 120 Broadway, New York, NY 10010.

Diane Kelly is the author of the Paw Enforcement K-9 mystery series, the House Flipper cozy mystery series, and the Tara Holloway mystery series. She lives in North Carolina with her husband, three crazy canines, and three demanding cats. Find her online at DianeKelly.com or on Twitter and Instagram at @DianeKellyBooks.