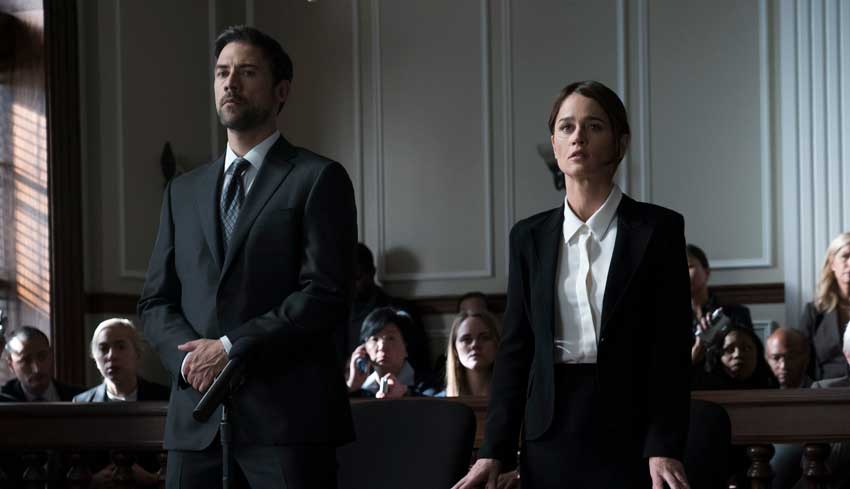 A confession: I’m an unrepentant Marcia Clark fan. As lead prosecutor in the criminal trial of O.J. Simpson, she showed uncommon class, intelligence, and poise in a circus-like atmosphere that encouraged grandiosity and egotism. After suffering a devastating defeat, Clark—who began her career as a criminal defense attorney—left the Los Angeles District Attorney’s office and found herself the (undeserving) subject of public ridicule. Indeed, her image wasn’t “redeemed” in mainstream America until Sarah Paulson’s nuanced portrayal of her as a single mother juggling career and children in the FX miniseries American Crime Story: The People v. O.J. Simpson (2016).

But for those willing to take notice, Clark had already redefined herself as a bestselling crime novelist (she’s written seven legal thrillers, including 2017’s Snap Judgment) and a presence on both ends of the television camera. In addition to consulting on/writing for Lifetime’s For the People, she’d sold pilots to multiple networks and had her two-book series optioned for television. That ABC’s The Fix (a 10-episode television “event”)—co-created/written/executive produced by Clark along with veteran showrunners Elizabeth Craft and Sarah Fain (The Shield, Women’s Murder Club)—is arguably her most high-profile, post-Simpson project doesn’t mean her storytelling credentials should be overlooked. And yet, audiences who aren’t familiar with Clark’s background beyond the courtroom seem to be having trouble separating fact from fiction.

Perhaps this isn’t surprising, given that Clark and The Fix’s protagonist, Maya Travis (played brilliantly by a vital-yet-vulnerable Robin Tunney), share an origin story: both are prosecutors who lost high-profile murder cases against celebrity defendants, were eviscerated in the media, and then resigned their positions after having lost faith in the justice system. But the specific parallels largely end there. Unlike Clark, Maya relocated to a horse farm in Oregon, found herself a cowboy boyfriend, and faded into relative obscurity. That is until the defendant in her case, British actor Sevvy Johnson (the convincingly confounding Adewale Akinnuoye-Agbaje), is suspected of killing again and she reluctantly agrees to return to Los Angeles to help to build a case against him. And while ABC has prominently featured Clark teasing the show as “part revenge fantasy” in their promos, it’s Maya’s revenge fantasy—not her own.

Rather than a rehashing of the Simpson trial, The Fix is a soapy whodunit that largely concerns itself with what goes on outside of the courtroom as the characters’ personal and professional lives messily intersect. Yes, it features the ongoing showdown between a prominent black man and a working-class white woman—but that’s merely the setup. Each has storylines that transcend the other. For instance, Maya must deal with the ramifications of returning to the office after her unceremonious departure eight years earlier; where does she fit in among the people who stayed (or the newbies, for that matter)? She also has an active stalker, a mole in the office, a frustrated love interest, and the threat of a burgeoning tabloid scandal. It’s not exactly a happy homecoming.

Sevvy’s situation is equally complex. While he was acquitted of the initial charges against him (the murders of his ex-wife and her friend), the court of public opinion rendered its own verdict, rescinding their adoration—at least stateside. Even his children—both biological and by marriage—are suspicious, and his duplicitous nature does little to quell their doubts. Allegations of physical and emotional abuse against wives and lovers compound the matter.

Fortunately (or not), Sevvy’s shameless attorney, Ezra Wolf (played by a delightfully devious Scott Cohen), is once again at the helm of a vigorous defense; that Sevvy is the cash cow keeping Wolf’s firm afloat amid escalating gambling debts is but one point of contention. There’s also an ex-wife (played by Robin Givens) who will be supportive for the right price and a mistress to further complicate things. If this sounds like a cluster you-know-what, it is—and it’s only the tip of the proverbial iceberg.

The Fix, then, is a supercharged search for the truth (the defense would prefer the term rush to judgment) mired in meta. Of course, the thing about truth is that it’s subjective; fittingly, the show utilizes the tagline: The truth has two sides. This is an underpinning theme and one that comes to define the primary characters as their arcs develop. We see this conflict in Maya as she vacillates between hoping Sevvy is innocent (which would absolve her of feeling responsible for his freedom to kill again) and praying he’s guilty (so she can avenge the victims she failed eight years earlier).

Is Maya a modern-day martyr for justice? Or is she blinded to the truth?

Sevvy is something of a Jekyll/Hyde; that he’s an actor begets the question: Where does the performance end and the person begin? Truth is seldom black or white, just as people are seldom all good or all bad. Rather, it’s usually found somewhere in between. The show exposes these gray areas, forcing its characters and its audience to recognize them.

For all its depth, The Fix is a vehicle for entertainment. In addition to being stylishly shot (mostly throughout LA and Malibu) and shrewdly self-referential, it boasts legitimate cliffhangers from episode to episode—and often from scene to scene. The pacing is frenetic but not in an unfocused way; instead, it reflects the whirlwind circumstances that its characters inhabit, where one story (or lead) breaks only to be overshadowed by another. The cumulative effect is one of imbalance and constant unsettledness, where Sevvy’s guilt or innocence is entirely up for debate. You’ll think you know, and then you’ll think again … and again. Halfway through the series, conspiracy theories and red herrings abound, but they’re more evocative of Clark’s deftly plotted crime novels than her courtroom cases—and the endgame is anybody’s guess.

Having said that, there are commonalities between the two; one of the reasons the Simpson trial resonated globally, after all, was because it brought provocative issues to the forefront. These shared themes include celebrity, domestic violence, ethics, media, racism, and sexism—all of which have the potential to influence the delivery of justice or the subversion of it. Each remains relevant today, and it would have been a disservice (not to mention a colossal bore) had the writers ignored them. Unlike the ‘90s, social media now trumps traditional news dissemination; as a result, strategic planning is often viewed through the prism of Facebook, Instagram, Twitter, and the like. As more than one character has opined: “Optics matter.” That was true in 1995, and it’s equally true now. Maybe more so.

The irony, unfortunately, is that The Fix seems to be suffering the same kind of superficial judgments that Marcia Clark herself did 25 years ago when the world got to know her through soundbites. Just as one shouldn’t judge a book by its cover, perhaps we shouldn’t judge a television show by its promo. Yes, first impressions matter, but they can be misleading—and we risk missing the treasures (or guilty pleasures) buried within when we don’t dare to scratch beyond the surface. The Fix may be the very best thing that you’re not watching. Don’t you owe it to yourself to find out?