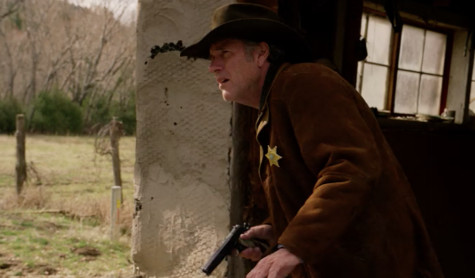 If the Season 5 premiere of Longmire was a bit slow on the windup, then “One Good Memory” delivers a fastball that wraps up the mystery of the missing Dr. Donna Monaghan (Ally Walker).

It starts nerve-wracking enough for Walt Longmire (Robert Taylor) as he hurries in the middle of the night to neighboring Cumberland County to see if a reported Jane Doe is the good physician. Have to confess, I was fooled by Walt’s emotive reaction to the woman on the slab, but it turns out not to be Donna, leading him to ask a deputy of Cumberland named Eamonn O’Neill (Josh Cooke) for assistance. You may remember Eamonn from when he subbed in Absaroka County and had a brief roll between the sheets with Vic (Katee Sackhoff).

He agrees to spy on his corrupt boss, Sheriff Wilkins (Tom Wopat), and be on the lookout for Walker Browning (Callum Keith Rennie). It quickly pays off when Walker is located by Eamonn at the Wilkins residence. Walt goes through his standard roughing-up-the-suspects routine, believing afterward, to his satisfaction, that Walker didn’t shoot at him—call it Sheriff’s intuition, I guess. Eamonn’s reward for helping is being fired, and he turns down the offer to work for Walt, sarcastically saying: “Yeah, that sounds great. Leap from one unstable, hostile work environment to another.”

I counted at least seven possible suspects (there’s probably more) that could have abducted Donna, and it comes down to Tamar Smith (Jamie Anne Allman), the ex-soldier with extreme PTSD who thought Walt reminded her of her former commander—which isn’t a good thing because the C.O. had raped her.

The break in the case surfaces when Tamar takes pity on her captive and allows Donna to call her son Andrew (Sterling Beaumon), who realizes the voice message she left him doesn’t sound like his mom’s usual repartee. At the same time, another former soldier with PTSD, Duncan Butler (Mac Brandt), who was also a patient of Donna’s, aggressively goes after a man named Randal (Anthony Horen), who Duncan believes is responsible for her disappearance.

As a veteran myself, I appreciate any show that brings the struggles of our military to a wider audience, but having two in the same story thread was a bit too much. Yes, I get that Dr. Monaghan is working with many battle-scarred troops and that’s part of the plot; still, Duncan was an unnecessary repetitive red herring that added little.

In another unsatisfactory plot thread, Mathias’s plan to use Henry as his puppet seems to have backfired. Henry says he would rather go to prison than be a pawn, adding that people who have come to admire “Hector” would likely turn on Mathias when the truth gets out. That’s it?! I want more screen time for Mathias, not less. Last season, when it appeared Mathias and Walt were heading toward a cooperative working relationship, I, for one, was looking forward to seeing them teamed together.

At a roadside gas station, Tamar pours gasoline over an attendant who is just trying to help and threatens to light him on fire. Meanwhile, in the restroom, Donna is rushing to leave a message on paper towels. Later, Tamar reproduces that plea for help to a discouraged Donna. In the proverbial nick of time, Walt’s memory improves, remembering a photo of Tamar by a canoe. With the gas station attendant’s help, he pinpoints a local lake where the two women are holed up.

A showdown occurs—Tamar aims a rifle at Walt and the sheriff levels his firearm at Tamar as Donna looks on. I really liked the handling of this delicate situation. Twenty years ago, in less progressive times, the “hero” would have got the drop on the “crazy,” blasting her away, feeling a bit remorse perhaps, but that’s how it was done to satisfy audiences. Here, Walt is a quick study, understanding Donna as she explains how Tamar thought she was protecting her friend from a possible rape—she’s not a criminal. Seeing Walt and Donna together had brought up repressed memories of being abused by her commanding officer, who Walt resembles, triggering her actions. Walt gives Donna the power by turning the gun over to the psychologist, and Tamar slowly leaves the house.

How irresponsible for Walt to then walk up behind Tamar on the dock, holding a rifle, after everything that just transpired mere minutes before. She asks to be handcuffed because she doesn’t trust herself and then requests a quiet moment alone. Did you also begin counting down the seconds until the splash? No lawman would walk away given her mental state. A real misstep. Don’t misunderstand, it was a finely acted, highly-charged scene, but it just doesn’t ring true. I’ll chalk it up to Walt being not fully recovered.