July 20, 2022
Author of Red Sky Morning Joe Pappalardo examines law and order (and the occasional absence of law and order) in the old West. Red Sky Morning relates the explosive and bloody true history of Texas Rangers Company F, made up of hard men who risked their lives to bring justice to a lawless frontier.

It’s hard to fathom the confusion of an old west gunfight until you’ve seen a firearm loaded with a full black powder charge spit a round downrange. It’s a full-body experience—shockwaves from the controlled explosion punch your chest, ears ring from the weapon’s report, and billowing thick smoke obscures everything. Only when this haze clears can a shooter tell if the target’s been struck.

Luckily for me, this display is on a gun range during a Single Action Shooting Society event, during which contestants dress in old west finery and blaze away with period-accurate pistols, shotguns, and rifles loaded with real ammunition. It’s an odd scene, but there is no better place to get an intimate view of the weapons of the late 1800s in action. Most competitors use partial charges, but a few favor full loads, just as the Texas Rangers and outlaws described in my book, Red Sky Morning.

Put a writer in an environment like an SASS tournament and a metaphor is bound to emerge. To me, the gunsmoke is the embodiment of the uncertainty that begins from the moment a trigger is pulled. It’s not just the gunsmoke to blame—a haze of cross-accusations, conflicting media accounts, disputes over the events leading up to the shooting and the tactics of lawyers seem to follow a bullet once it’s been fired. This is true now, especially in cases involving law enforcement, but it could also be true in 1886-1888, when the main events of Red Sky Morning occur.

In most media treatments of the Old West, the “law” part of the story is well captured by manhunts and shootouts. The “order” side of the equation, however, is not as well examined. What is a staple of the true crime genre—the courtroom drama—is not usually part of the genre’s tableau. Yet it’s nearly impossible to understand the dynamics of this era without knowing the legal aftermath of their cases, and the system that they operate within.

There are seven critical shooting deaths in Red Sky Morning, and each leads to legal consequences. There are trials of citizens accused of murder that possibly include tainted testimony. Anger over this motivates a jailbreak and an entire family becomes fugitives, bringing them into the crosshairs of the Texas Rangers. In another incident, two Rangers are brought up on murder charges for shooting a cowboy while trying to disarm him; he wasn’t just any trailhand, but part of a well-heeled ranching family who demanded action. Reading 135-year-old court transcripts of attorneys wrestling over split-second decisions surrounding a law enforcement shooting feels modern, as do the presidential pardons that follow.

And then, there’s the case of the Lone Highwayman of Ballinger. The Rangers arrest a man for a series of stagecoach robberies and he’s sentenced to 99 years, but the crimes resume and another man is arrested. The Rangers’ quarry is released from prison. Preceding Ranger biographies end the story with the first Highwayman sentencing, which certainly colors the original chase and arrest.

Other courthouse examinations shed light on the legal landscape that the Rangers faced on the job. In 1887, the governor calls Company F to stem a series of “fence cuttings” in Brown County. Parties of armed men are riding after dark, snipping the barbed wire that’s appearing to end the era of the open range. It’s an insurrection supported by many locals, including public officials, and the midnight raids attract cattle thieves and constables alike. The Rangers use a combination of undercover officers and local informants to learn the time of a fence cutting party, pick a spot for an ambush and wait for the fence cutters to approach.

Even if the Rangers announced themselves before shooting, as they report, the ambush was crafted with violence in mind. There is a reason the local informant is riding in the back of the party of fence cutters. Surprised at night while involved in a simmering range war, the cutters likely went for their guns on instinct. Two are killed, the others flee to be collected later.

The lawmen come off as eager to kill rather than arrest. But the aftermath helps understand why the guns-first approach made brutal sense. Courtrooms have become revolving doors for charged fence cutters, with cases dropped by judges before they even reach trial. The mood of the locals in Brown County is ugly—a local cop in the town of Brownwood nearly sparks a shootout with the Rangers when he tries to arrest the informant for wearing a gun. (Guns are drawn in a classic showdown, but the captain of Company F soothes the situation by saying the man has been deputized.) The informant is nearly shot from his wagon shortly after, saved only by his scared mule’s instinct to flee the kill zone.

Officials in Brown County treat fence cutters lightly out of fear and sympathy. Of those arrested that fatal night, and those accused of the attempted killing of the informant, all are freed without consequence. Still, the fence cutters are not as keen to continue operating in Brown County with the stakes so dangerously high. The night raids drop off, massive open range cattle die-offs make the fences inevitable, and the Rangers are eventually ordered elsewhere. In the end, the killing of the two fence-cutters achieved what the governor wanted, despite local resistance. This sort of precedent sets the tone for the anti-corruption work the Rangers would bring to crooked oil boom towns of the 1900s and the malfeasances of modern-age Texas politics.

I never considered “Western” as a genre, only as a setting. Red Sky Morning is more properly a true crime book set in the last years of the Texas frontier, with a focus on both sides of specific duels between various lawmen and outlaws. What precedes and follows the violence is where the true drama and insight can be found.  The book’s focus on the full scope of specific cases, a true crime blueprint applied to U.S. history, allows readers to get a better sense of the methods used by the Rangers, the motives of the outlaws they hunted and the range of contemporary reactions – in and out of courthouses – to their bloody work.  Once you give these stories the space to let the air clear, it’s clear that there’s more to any shootout than just the gunsmoke.

Between 1886 and 1888, Sergeant James Brooks, of Texas Ranger Company F, was engaged in three fatal gunfights, endured disfiguring bullet wounds, engaged in countless manhunts, was convicted of second-degree murder, and rattled Washington, D.C. with a request for a pardon from the US president. His story anchors the tale of Joe Pappalardo’s Red Sky Morning, an epic saga of lawmen and criminals set in Texas during the waning years of the “Old West.”

Alongside Brooks are the Rangers of Company F, who range from a pious teetotaler to a cowboy fleeing retribution for killing a man. They are all led by Captain William Scott, who cut his teeth as a freelance undercover informant but was facing the end of his Ranger career. Company F hunted criminals across Texas and beyond, killing them as needed, and were confident they could bring anyone to “Ranger justice.” But Brooks’ men met their match in the Conner family, East Texas master hunters and jailbreakers who were wanted for their part in a bloody family feud.

The full story of Company F’s showdown with the Conner family is finally being told, with long dead voices being heard for the first time. This truly hidden history paints the grim picture of neighbors and relatives becoming snitches and bounty hunters, and a company of Texas Rangers who waded into the conflict only to find themselves over their heads – and in the fight of their lives.

JOE PAPPALARDO is the author of the critically acclaimed books Inferno: The True Story of a B 17 Gunner’s Heroism and the Bloodiest Military Campaign in Aviation History, Sunflowers: The Secret History and Spaceport Earth: The Reinvention of Spaceflight. Pappalardo is a freelance journalist and former associate editor of Air & Space Smithsonian magazine, a writing contributor to National Geographic magazine, a contributor to Texas Monthly, and a former senior editor and current contributor to Popular Mechanics. He has appeared on C-Span, CNN, Fox News and television shows on the Science Channel and the History Channel. 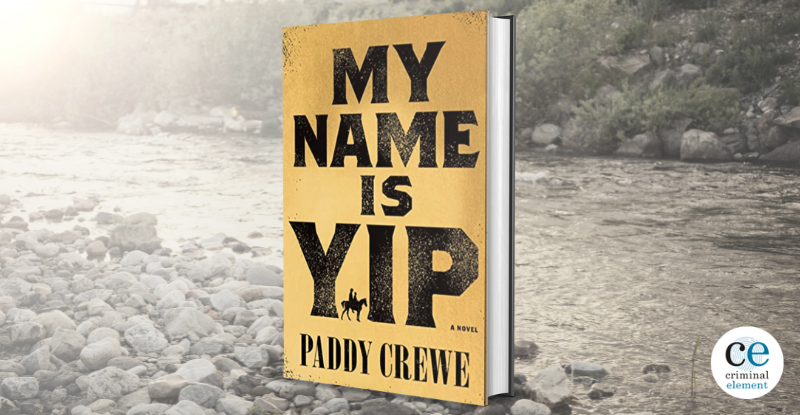 Book Review: My Name Is Yip by Paddy Crewe

Yip Tolroy was born mute, but even before his speechlessness was discerned, the pale, hairless baby was not thought to be long for this world. His father, already in a state of high emotion at the birth of his first child, went outside to get some air after the doctor expressed his doubts as to…