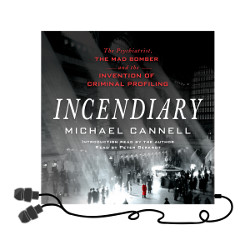 Incendiary: The Psychiatrist, the Mad Bomber, and the Invention of Criminal Profiling by Michael Cannell details the search for a serial bomber who stalked the streets of 1950s New York. The race to catch him would give birth to a new science called criminal profiling.

In desperation, Police Captain Howard Finney sought the help of a little known psychiatrist, Dr. James Brussel, whose expertise was the criminal mind. Examining crime scene evidence and the strange wording in the bomber’s letters, he compiled a portrait of the suspect down to the cut of his jacket. But how to put a name to the description? Seymour Berkson—a handsome New York socialite, protégé of William Randolph Hearst, and publisher of the tabloid The Journal-American—joined in pursuit of the Mad Bomber. The three men hatched a brilliant scheme to catch him at his own game. Together, they would capture a monster and change the face of American law enforcement.

Listen to an exclusive audio excerpt read by Peter Berkrot and learn how to enter for a chance to win one of 3 unabridged audiobook CDs!

Comment below for a chance to win an audiobook copy of Incendiary by Michael Cannell!

Incendiary Audiobook Comment Sweepstakes: NO PURCHASE NECESSARY TO ENTER OR WIN.  A purchase does not improve your chances of winning.  Sweepstakes open to legal residents of 50 United States, D.C., and Canada (excluding Quebec), who are 18 years or older as of the date of entry.  To enter, complete the “Post a Comment” entry at https://www.criminalelement.com/stories/2017/05/incendiary-audio-excerpt-comment-sweepstakes beginning at 2:00 p.m. Eastern Time (ET) May 9, 2017. Sweepstakes ends 1:59 p.m. ET May 16, 2017. Void outside the United States and Canada and where prohibited by law. Please see full details and official rules here. Sponsor: Macmillan, 175 Fifth Ave., New York, NY 10010.