How Serving on a Grand Jury Helped Inspire My Novel

August 31, 2020
Serving on a grand jury made Maria Romasco-Moore think about how the criminal justice system is an imperfect system and how its complex issues should be considered both in real life and in crime fiction. Her new book, Some Kind of Animal, is available now!

I didn’t know what a grand jury was when I got a letter telling me I was on one. The name made it sound like a regular jury but more fancy. Perhaps we’d get to wear big white wigs.

We did not. The jury consisted of me and twentyish other disgruntled citizens who met every week over the course of several months. We heard dozens of cases. Our job was not to decide if anyone was guilty or not, but whether a crime had occurred at all.

At the time I lived in the poorest county in southern Ohio, where 30.2 percent of the population lives in poverty, more than twice the national rate.

In the small courtroom where the county prosecutor presented us with our parade of cases, patterns quickly emerged. There were a few standout cases—one with a series of civilian witnesses who were all clearly lying, every one of them having conveniently looked away at precisely the moment of the incident.

Most days, though, we were faced with a procession of uniformed men, many of them highway patrol officers, who rattled off accounts of arrests or traffic stops in clipped, police-report style.

I noticed as the weeks went on that a surprisingly large number of the cases seemed to come from in or around one small town in the region—a town with a population of less than two thousand people.

I’d driven through the town before, seen the mural that commemorated the coal boom. Seen the empty storefronts.

The town was, in its history, not unlike the place where I went to high school. Altoona, Pennsylvania, was once a thriving railroad town, but the decline of the railroad industry led to its decline. This small Ohio town where I lived now was different, but its precipitous decline was the same.

I will not name the town because I don’t want to flatten it into a statistic. It is a real place, full of real people, with all kinds of stories. For my novel, Some Kind of Animal, I created a fictional small town in Appalachian Ohio to tell the story of a girl with a secret feral twin sister who lives in the woods.

…[E]verything about our justice system perpetuates poverty; a felony on your record bars you from many forms of employment.

But that one small town, the one I kept hearing about over and over while I sat on the grand jury, was my main inspiration. None of the details of the cases we heard made it into my book, only the fact that the region was hard-hit by the opioid crisis. I visited the town many times in the years that followed, trying to understand it better.

Why did so many cases come from that one small town? I am not an economist or a sociologist, but I don’t think it takes an expert to determine that poverty and crime are related. Our judicial system criminalizes poverty. The bail system keeps many people who haven’t been convicted of a crime in jail simply because they cannot pay to be released. And everything about our justice system perpetuates poverty; a felony on your record bars you from many forms of employment.

These are complex issues, more complex than I can address here. But they must be considered, both when thinking about crime in life and crime in fiction.

My role on the grand jury often felt like a mere formality. Never more so than when I and my fellow jurors were taken to tour the nearby state prison as part of a policy of civilian oversight. We saw very little of the place—the cafeteria, the gym, the yard, where a guard smugly told us about family members throwing drugs over the fence. It resembled a high school: fluorescent-lit, drop-ceilinged, a lingering odor of steamed broccoli in the halls. I was only twenty-three, the youngest member of the jury by far. I felt that if we were truly there to oversee, we would have been taken into the living quarters, but I did not feel confident enough to protest.

There were other things about my time on the grand jury that troubled me. Things the other jurors said, especially in response to a domestic abuse case we heard. The way prejudice and bias were so clearly influential, even in our simple task. And of course, that town.

So I did what I always do when I am troubled, when I have feelings that I don’t know how to process. I wrote. 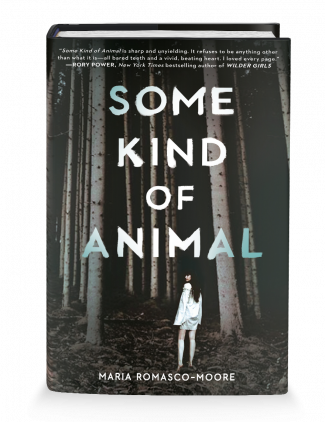 About Some Kind of Animal by Maria Romasco-Moore:

Jo lives in the same Appalachian town where her mother disappeared fifteen years ago. Everyone knows what happened to Jo’s mom. She was wild, and bad things happen to girls like that.

Now people are starting to talk about Jo. She’s barely passing her classes and falls asleep at her desk every day. She’s following in her mom’s footsteps.

Jo does have a secret. It’s not what people think, though. Not a boy or a drug habit. Jo has a twin sister.

Jo’s sister is not like most people. She lives in the woods—catches rabbits with her bare hands and eats them raw. Night after night, Jo slips out of her bedroom window and meets her sister in the trees. And together they run, fearlessly.

The thing is, no one’s ever seen Jo’s sister. So when her twin attacks a boy from town, everyone assumes that it was Jo. Which means Jo has to decide—does she tell the world about her sister, or does she run?

Maria Romasco-Moore is the author of I Am the Ghost in Your House and Some Kind of Animal, as well as Ghostographs, a collection of short stories paired with vintage photographs. She is an instructor at Columbus College of Art and Design. To learn more go to mariaromascomoore.com or follow @MarRomasco on Twitter.